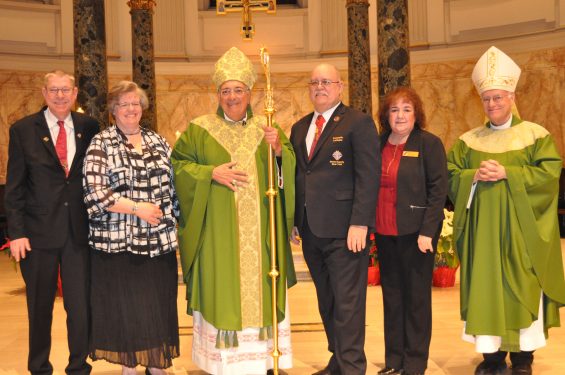 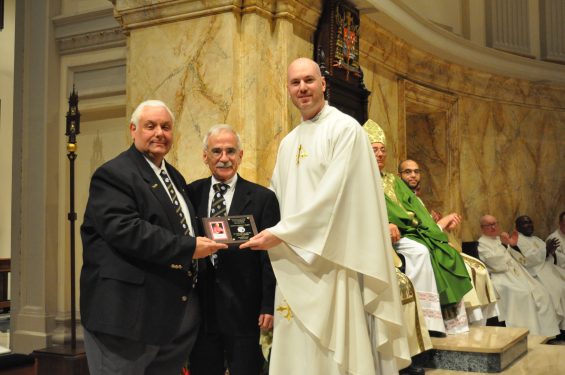 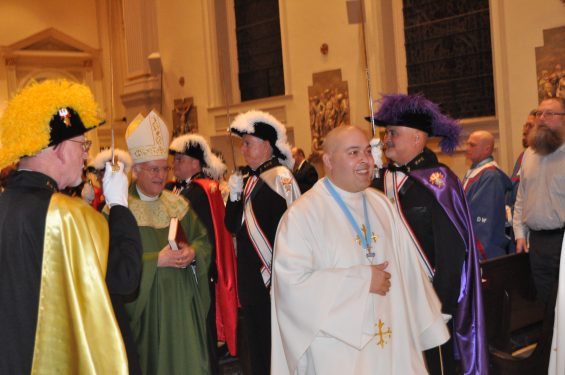 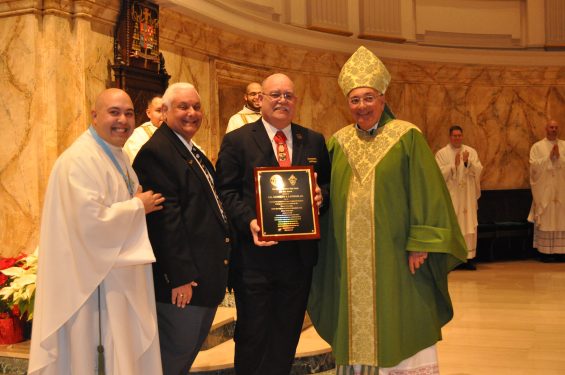 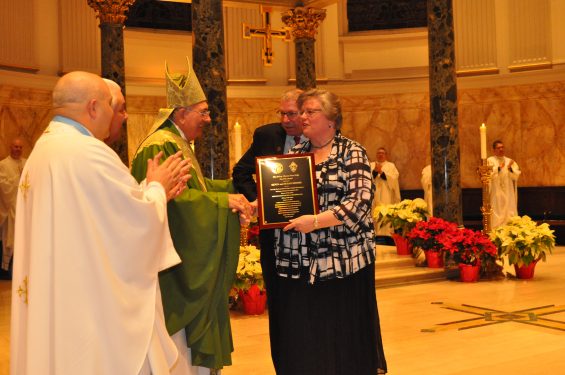 A Bishop, the State Deputy of the Knights of Columbus and two pro-life counselors were the honorees at the Pro Vita Mass celebrated Jan. 27 at the Cathedral-Basilica of St. James in Downtown Brooklyn.

Bishop Nicholas DiMarzio was the main celebrant and recipient of the Father Michael J. McGivney Award, named in honor of the founder of the Knights of Columbus.

The Knights of Columbus and the diocese sponsor the annual liturgy.

The late Bishop Daily, who died last year, served as the sixth Bishop of Brooklyn, 1990-2003, as well as the supreme chaplain for the Knights of Columbus, and was known as a strong voice for the unborn.

“We’re trying to protect life,” said Bishop DiMarzio. “It’s a difficult thing because people don’t seem to understand the real issue, that life is the most important thing and it cannot be done away with, at its beginning or its end. From conception, it’s a human person.”

Father Gelfant said that Bishop DiMarzio was chosen because “along with his unwavering defense of human life in the womb, he has never stopped promoting a culture of human dignity and respect for all levels of humanity.

“Most importantly, Bishop DiMarzio has not remained silent in a world that seeks to silence unpopular beliefs, even if they are true.”

Latham said that he was accepting the honor on behalf of the 68,000 members of the Knights of Columbus in New York State.

“The Knights of Columbus is a pro-life group,” explained Latham. “We stand for life at all its stages.

He called abortion “the greatest genocide known to man” and said that “innocent babies are being destroyed every day for no other reason than they are unwanted.”

Father Gelfant explained that Susan and Kevin Moore “have dedicated countless hours of prayer and held vigils outside of abortion facilities. For sure, their prayers have saved souls and converted others. We recognize their personal sacrifice and commend this married couple for engaging in a joint ministry in our Catholic Church.”

Susan, who is a niece of Msgr. Philip Reilly, the founder of the Helpers of God’s Precious Infants, and serves the organization as his administrative assistant, says that she was raised in the pro-life movement. Her mother has received the Pro Vita Award twice, once from Bishop Daily and once from Bishop DiMarzio.

“It’s our existence,” she said. “It’s our faith. It’s everything we should be living for.

“The unborn should have a voice. We are their voice because they don’t have one right now.”

Kevin added that “we’re not just there for the child but we’re there for the mother as well. Even if she makes the tragic decision to end the life of a child, we’re still there for her to help.”

In his homily, Bishop DiMarzio told the congregation that they are called to be for life, and that means from the beginning of life to the moment of death.”

He cautioned that “we need to recognize that evil exists and the Devil exists.”

He said that while “we have done some things to make the cause of life more visible,” it is also important “that we recognize the origins of the culture of death.”

He concluded that the Eucharist and the Sacrament of Reconciliation are the best instruments “we have to dispel the evil one from our lives.”

At the conclusion of the liturgy, the Knights of Columbus made two additional presentations. One was a check for $10,000 to Bishop DiMarzio for his charities’ fund. The second was a check for $5,000 in memory of the late Bishop Daily to Father Peter Purpura, rector of St. James Cathedral for the restoration of the church bells.

It was also announced that a new Knights of Columbus Council is being planned at St. James Cathedral and will be named in honor of Bishop Daily.