Mission accomplished! The two priests and three seminarians who set out to bicycle their way up the East Coast, from Florida to Long Island, have completed the route and are home safe and secure in the knowledge that their mission of pedalling vocations has been successful.

“It’s been an awesome experience,” said Father Marc Swartvagher, the new pastor of Our Lady of Grace parish, Howard Beach.

For 1,400 miles, the men rode as a pack, each one taking turns in the lead to block the headwind, each one offering words of encouragement when the road ahead seemed interminable. 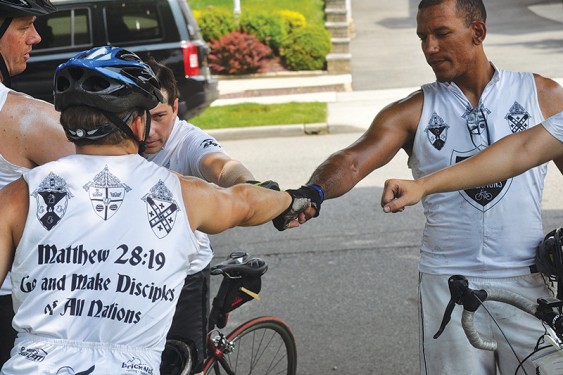 The cyclists offer a prayer of thanksgiving as they arrive in Kearny, N.J., in the Archdiocese of Newark. (Photos by Ed Wilkinson) 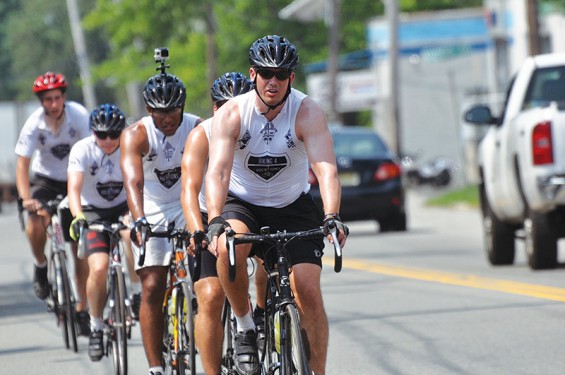 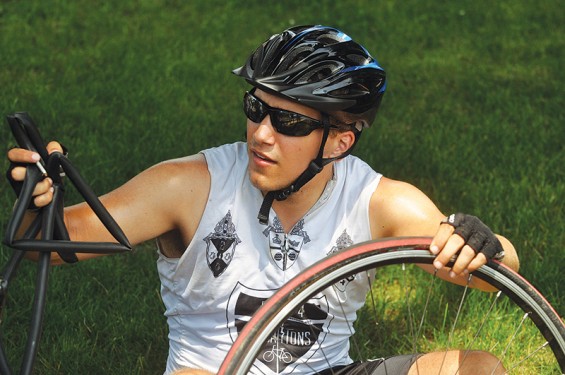 Seminarian Dominik Wegiel fixes a flat tire along the route in New Jersey. 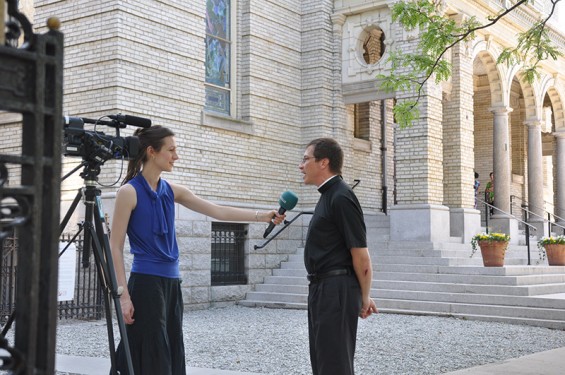 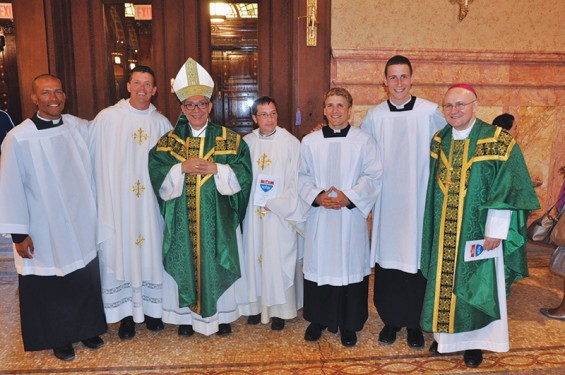 Along the way, they experienced what they refer to as “radical hospitality.” People took them into their homes and offered meals and shelter. Parishes organized greeting parties and celebrated Masses of thanksgiving. Young people turned out to attend seminars about vocations to religious life.

Seminarian Stephen Rooney, of the Diocese of Rockville Centre, came up with this brainstorm. Last summer, he cycled across the U.S. on a mission to support affordable housing. But something was missing for the college seminarian. It was purely a secular trip. There was no spiritual bond, no prayer.

He started talking up his concept of a bike pilgrimage for vocations and began recruiting a team.

Father Joe Fitzgerald, vocations director for the Diocese of Rockville Centre, was on board. A former Olympic athlete – he won a gold medal as part of the team handball squad in Atlanta – he brought his fitness and team concept to the mission.

“We got through it as a team,” said Father Joe as he prepared to speak to young people about the adventure.

A little prayer also went a long way. Each start to the day was marked by prayer for safety and later a prayer of thanksgiving was offered when they arrived at their destination, whether it was in a rural driveway or on a concrete sidewalk.

Not to say there weren’t some close calls. Each rider averaged two flats. One day, a bike’s chain became mangled into a design none of the men had ever seen before. Occasionally, someone would fall. One of the seminarians got sideswiped and required some minor medical attention. And seminarian Dominik Wegiel will never forget the van that came to a screeching halt about a foot from his rear tire.

There was also reason to celebrate. Tory, driver of the support vehicle, received the sacrament of Confirmation from Bishop Robert E. Guglielmone in the Diocese of Charleston, S.C. Rooney was the proud sponsor.

After almost a month on the road, the bikers finally arrived in New York last weekend, with a stop at St. Patrick’s Cathedral, and an overnight at St. Joseph’s Seminary, Dunwoodie; then on to St. Joseph’s Co-Cathedral, Prospect Heights, and overnight hospitality from St. Brendan’s rectory, Midwood; and finally the last leg out to Long Island where they were greeted by Bishop William Murphy in Rockville Centre.

In Brooklyn, the team was met by Auxiliary Bishop Octavio Cisneros and Auxiliary Bishop-elect James Massa, who were concelebrants at a Mass of thanksgiving at St. Joseph’s Co-Cathedral.

“They did it because they trusted God,” commented Bishop Cisneros. “Our cyclists embarked on the journey to raise consciousness in each of us as we respond to the call of God. They all did it with the same faith that God calls us to respond to greatness and to proclaim the Kingdom of God.”

“Jesus was the thread that kept us united,” said Father Joe.

He told the story about how one evening they stayed at a local YMCA. They asked the director if there was anything she wanted them to pray for. Not used to the question, her response was emotional. She asked for prayers for “our young people.”

“Our theme was ‘Make Disciples of All Nations,’” said Father Swartvagher, “Hopefully, we have sown the seeds of a few vocations.”