This site uses cookies to store information on your computer. By using this site, you consent to the placement and use of these cookies. Read our Privacy Policy to learn more. ACCEPT
Skip to content
My dear brothers and sisters in the Lord,

The aftermath of Hurricane Sandy has brought many memories to mind of similar situations of the past, most recently the earthquake in Haiti, as well as my personal involvement in the Italian earthquakes of the Irpinia region in Southern Italy in 1980 and in L’Aquila in 2009.

My thoughts go immediately to those who lost their lives – people like Nancy Sorenson, a teacher at Our Lady of Grace School, Gravesend, and also the four-year-old who was a student at St. Edmund’s School, Sheepshead Bay. My heart goes out to their families.

Any disaster, natural or man-made, is difficult to accept. In Brooklyn and Queens, and in our surrounding area, the magnitude of the destruction of Hurricane Sandy will be with us for a long time to come.

As I mentioned several years ago in relationship to the earthquake in Haiti, some wonder why God would let such tragedies happen. Those who wonder this are really living out of a level of natural religion which somehow blames God for the problem of evil. As long back as 300 B.C., the problem of evil was described by a pagan philosopher named Epicurus. It is a famous paradox titled, “The Riddle of Epicurus” that describes how natural religion tries to deal with the problem of evil. The riddle says, “If God is willing to prevent evil, but is not able to, then He is not omnipotent. If He is able, but not willing, then He is malevolent. If He is both able and willing, then whence cometh evil? If He is neither able nor willing, then why call Him God?”

This approach, obviously, did not work. Truly, if we are looking for causality, any meteorologist would be able to tell us that the high tide, full moon and a perfect storm came together to cause the widespread destruction that Sandy left on our door steps on the Northeast coast. Today, some who may be called neo-pagans, look for other answers, since they seem to have no belief in God. They blame global warming, or, in effect, ourselves for not taking care of the environment. Some blame the reduction of the ozone layer which some say leads to these more violent storms. I will leave that solution of these proposals to scientists who can verify global warming, because it is not something we can believe in, rather it is something that needs to be proven.

New Yorkers Are Resilient
More importantly, the effect of Hurricane Sandy on our diocese and mainly its people will be with us for some time to come. But we know that New Yorkers are resilient. We survived Sept. 11, 2001 the plane crash in the Rockaways, and now we will also survive Sandy. Following the storm, I was able to travel to our nine parishes that were affected, not just the churches, all of which sustained water damage, but also the community and pastoral staffs, many of whom remained through the storm. I found all of the pastoral staffs doing their best to tend to the needs of their people. Msgr. Michael Curran and Father John Cullinane of Blessed Trinity parish remained in Breezy Point during the entire storm, doing their best to comfort those who came to the Church that day. I found Msgr. James Spengler, who himself is not in the best of health, outside of St. Rose of Lima, Rockaway Beach, pushing sand with a snow shovel trying to clear debris away from the church. Msgr. John Brown of St. Francis de Sales, Belle Harbor, was fully vested for Mass while trying to oversee what seemed to be a chaotic relief center at their school.

The day after the storm, I visited the convent of St. Francis de Sales where the principal, Sister Patricia Chelius, C.S.J., and two other sisters remained without heat or electricity while trying to maintain a presence. Sister told me that she had to clean the school so they could open and the students could return as soon as possible. These few examples of dedication that I mention here are multiplied by the thousands throughout our diocese by so many who gave of themselves to help those in dire need of assistance. These efforts are truly remarkable. 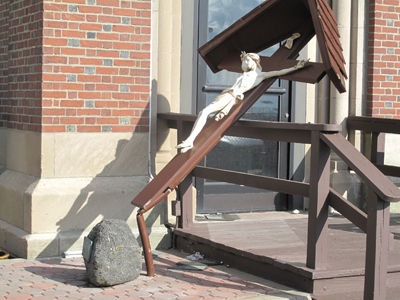 This past Sunday, I celebrated Mass in Breezy Point at St. Thomas More Church, part of Blessed Trinity parish. The Church was filled by many who had come back from their temporary exiles to their beloved community. Breezy Point is a tight-knit community which pulled together just as they did through the Sept. 11, 2001 attacks because they experienced so many fatalities. The 9/11 Memorial on the bay side of Breezy is a testament to the sacred memories they hold so dear from that other disaster and now a tragedy which they experience even more directly.

The Year of Faith, which we have just begun, has been lived experientially by many in our diocese here in Brooklyn and Queens. These people have not lost their faith based on hope, and, most importantly, they have witnessed to the virtue of charity. With offers of help, donations and volunteer efforts have made the beginning of the Year of Faith truly an exercise in charity that supports faith, as suggested by our Holy Father, Pope Benedict XVI.

Most of our relief efforts are part of the organizational work which Catholic Charities created and put into effect several years ago. The plan is complete with evacuation sites and the mobilization of the staff of Catholic Charities for specific purposes. At that time, I could not imagine that we would really need such a plan. However, how important it is that there was foresight to have one. Msgr. Al LoPinto, vicar for human services, assisted by Robert Siebel, CEO, and Sister Ellen Patricia Finn, O.P., deputy executive director, made it their business to work quickly in making sure that Catholic Charities of Brooklyn and Queens was visible prior to and after Hurricane Sandy. In fact, on the Rockaway Peninsula, Catholic Charities was the first to establish a relief center.

As you know, we have asked for donations of non-perishable food items, which will be needed in the coming weeks as power returns and residents re-stock their empty shelves and are able to cook hot meals again. In addition, other items are being requested, such as: flashlights, D batteries, bottled water, diapers and other baby items, trash bags, paper goods, inflatable mattresses and much more are needed. For a full list of needed items, as well as other ways to assist Catholic Charities monetarily or through volunteerism, please see their website at www.ccbq.org or call 718-722-6001.

Catholic Schoolchildren Relocated
Part of another major effort is the relocation of students from five of the affected schools. Bishop Frank Caggiano, Vicar General and Moderator of the Curia, and Dr. Thomas Chadzutko, Superintendent of Catholic Schools, have worked tirelessly with the school principals in order to plan temporary relocation of our students. A toll-free number is available for families (1-800-963-6715) to find Catholic schools for their children.

As we all know, through devastating experiences and after, we often find that humor can get us through some of the rough times. At Sunday’s Mass at Breezy Point, I announced that there would be no collection, since a special collection was being taken up at all of the other churches in the diocese for their benefit, that this time they would be on the receiving end of the generosity of the people of Brooklyn and Queens. Upon hearing this, there was a huge outburst of laughter, followed by a rousing round of applause. It is my hope that our own diocesan collection, supplemented by outside contributions, will allow us to directly assist our families in ways necessary.

The Brooklyn Diocese has put out into the deep, as we try to deal with the aftermath of Hurricane Sandy. These natural disasters and human suffering allow us to join our suffering to that of Jesus Christ.

We cannot forget St. Paul’s words to the Colossians when he said, “In my flesh I am filling up what is lacking in Christ’s afflictions for the sake of His body, that is, the Church.” What is lacking in the suffering of Jesus Christ is our participation. Yes, whatever we do contributes to the continual saving of the world, and we accept our share of the sufferings of the Lord as we experience suffering in our own lives. The dramatic picture that accompanies this column of the crucifix at St. Rose of Lima Church in Rockaway Beach attests to the power of the cross. The iron rod on which the cross was mounted is bent and broken. However, the cross and corpus remained intact. What a lesson for us, that although suffering and evil and affect us, we never can be overcome by it.

Please join me in praying for those affected by Hurricane Sandy, especially for those whose lives were lost, that we might be restored to normalcy as soon as possible.

2 thoughts on “Bent, Broken and Powerful”