So naturally, there’s a heated football rivalry between these gridiron foes. In fact, the rivalry is so intense that the annual matchup has been dubbed the “Battle of the Boulevard.”

The Holy Cross Knights earned a decisive 35-8 victory in this season’s battle played Oct. 4 at Bayside Athletic Field. With the rain pouring down, the Knights relied on a strong rushing attack and shutdown defense en route to their sixth straight win in “Battle of the Boulevard” contests. 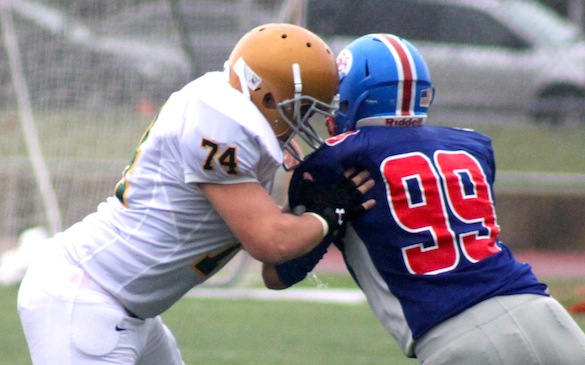 “The weather was a factor,” said Tom Pugh, head varsity football coach at Holy Cross, who has been part of plenty of matchups involving this rivalry. “But we told our kids before the game, ‘No matter what, it’s still the Prep game.’”

“We were working all week,” said Knights’ senior linebacker Chris Manfre. “We knew what we had to do to beat Prep, and we did it, we executed. The defense played great, and the offense played great.”

Holy Cross capitalized early with three rushing touchdowns – one each by juniors Edwin Villegas, Daeon Pierce and Jeremiah Nelson – in the first half to open a 21-0 lead at the break.

Early in the second half, Nelson delivered the knockout punch when he took a handoff at his own 3-yd.-line and broke through for a 97-yd. touchdown run.

“Our o-line just did a great job, and the coaches did some great play-calling,” Nelson said. “I love my team. We came out here and worked hard, and we knew this was the Prep week. It was a big week.”

Holy Cross may have won the matchup this time around, but for both teams, the “Battle of the Boulevard” game is always the highlight of the fall football schedule.

During the week leading up to the game, anticipation mounts among the student body and faculty at the respective schools, since the rivalry is considered to be one of the best in New York City high school football.

For the student-athletes, a strong showing in this game serves as a lasting memory for years to come.

“All we hear about when alumni come back to school is ‘Did you guys beat Prep?’” Nelson said. “This is not a game; it’s a memory. We’re going to remember this for the rest of our lives.”

For the time being, the bragging rights in the “Battle of the Boulevard” belong to Holy Cross, but there’s certainly a chance these rivals could meet again in the CHSFL playoffs – just like they did last season.

Now that matchup would be a real battle! 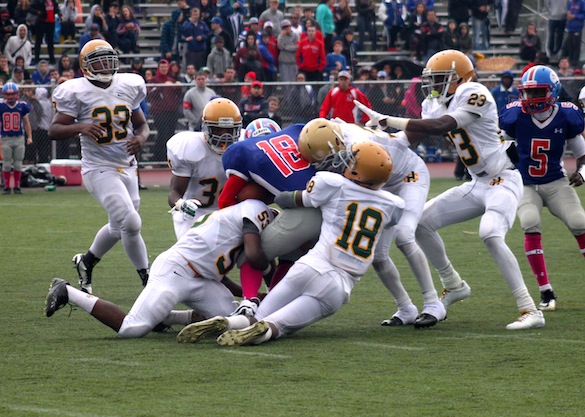