During the course of a college basketball season, a team is prone to experiencing plenty of ups and downs.

From a loss after a hard-fought effort, to a rigorous practice coupled with a seemingly endless pile of schoolwork, these student-athletes can sometimes have tough schedules.

But in the larger scheme of life, how “tough” is that schedule compared to the treatment routine of a child with cancer?

Probably not that “tough” at all. In fact, the two do not even compare.

So at least for a few hours, a few local college hoops teams were able to put their own playing experience in perspective, as they took part in an event that was easily the most important part of their season.

The men’s college basketball teams from St. Francis College, Brooklyn Heights, and the College of Mount St. Vincent, the Bronx, attended the fifth annual “Swish For Kids” basketball classic Feb. 7 at St. Ephrem’s parish, Dyker Heights. The players put on a clinic for children battling cancer and those who have completed their treatment.

The event is organized each year by Frank Stella, the chairman and basketball coordinator at St. Ephrem’s who himself is a survivor of stage 4-B Hodgkin’s lymphoma.

“As a cancer survivor, I remember the days of chemotherapy and radiation of course as these kids have gone through,” Stella said. “Just to come to the gym to spend some time with these college basketball players is incredible.”

Six children attended the first-ever “Swish For Kids” in December 2011, but since then, the event has grown steadily in size. This year, nearly 40 children participated and learned some valuable basketball skills from the college athletes.

“I did the passing drill…the ring of fire; it takes a lot of practice to do it like them (the college players),” said participant George Fischetti. “I really liked doing the running drills and the shuffling. It was really awesome.”

On the flip side, while the kids learned from the players, the college students found plenty of inspiration in playing alongside children who are going through some tough times.

“This is more important than anything we have going on in our lives,” said Terriers senior power forward Chris Hooper. “These kids have it harder than our lives.”

New to the event this year were members of the Princess Project, a group of students from Mount St. Vincent who dress up as Disney princesses and visit local children’s hospitals.

“This really underscores what a great community we have here in Brooklyn,” said Councilman Vincent Gentile, 4th District Brooklyn. “They (the students) are doing this on their own time because they want to give back. Giving back for such a good cause makes them feel good also. So I think this is a big win for both sides.”

The day before the clinic, St. Ephrem’s hosted a youth basketball tournament for teams in its newly formed intramural league, with all entry fees being donated to the Francesco Loccisano Pediatric Cancer Foundation, aka Frankie’s Mission.

The nonprofit organization was started in memory of Frankie Loccisano, a former student at St. Ephrem’s Elementary School and Xaverian H.S., Bay Ridge, who passed away in September 2007 after a courageous battle with bone cancer and leukemia.

As he went through his treatment, Frankie had a vision of launching his own foundation to assist the childhood cancer community. Through his mother, his vision has come to life.

“We run a very active family support program,” said Camille Orrichio Loccisano, Frankie’s mom and the president and founder of the organization. “We work with social workers, nurse practitioners and childhood cancer groups, and they help with families that are experiencing financial pressure from their child’s cancer treatment.”

In 2015 alone, Frankie’s Mission assisted 65 families, many of whom attended the “Swish For Kids” event on the same court where Frankie once played basketball.

“There’s more to life than basketball, and there are a lot more obstacles in life to overcome,” said Brian Nigro, the head coach of the Mount St. Vincent Dolphins who also taught Frankie at Xaverian. “These children are truly challenged with that, so it’s great to see my guys help put a smile on their faces.”

The day was made possible thanks to the support of a number of dedicated volunteers and a long list of sponsors, including Ferrantino Fuel Corporation, Harbor Fitness, Faicco’s Italian Specialties, Weichert Realtors, The Franzese Group, Investors Bank, L&B Spumoni Gardens, Perfect Tan, St. Francis College and Knights of Columbus.

Once again, “Swish For Kids” proved that sometimes the best form of treatment for a child battling cancer can simply be a smile.

And if that’s the case, the local college students did their part to spread plenty of smiles.

To make a donation to help a family struggling with pediatric cancer, visit www.frankiesmission.org. 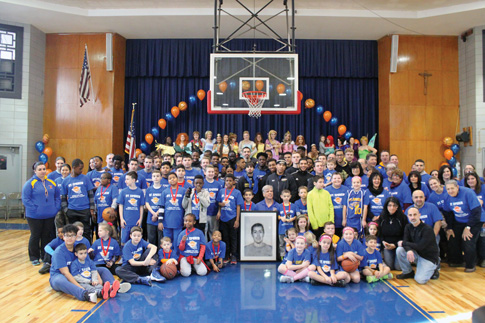