More than 1,500 people participated in a candlelight vigil of prayer and peace Tuesday evening, July 11 at Grand Army Plaza in Brooklyn.

Led by Bishop Nicholas DiMarzio, leaders of various religions offered prayers and called for calm in the wake of the assassination of five police officers in Dallas, Texas, and the deaths of two black men by white police officers in Baton Rouge, La., and St. Paul, Minn.

“Today, despite all the many advances, our nation seems to remain torn apart over race. The victims are our children, our brothers and sisters, our parents, our friends and loved ones,” said Bishop DiMarzio. 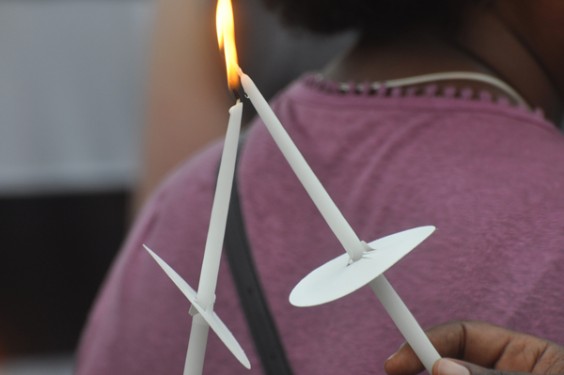 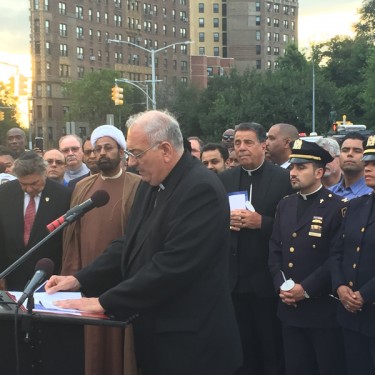 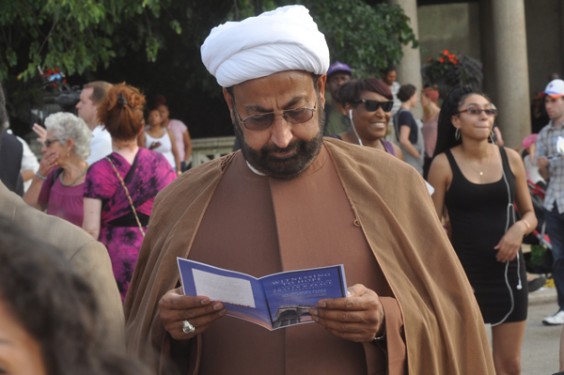 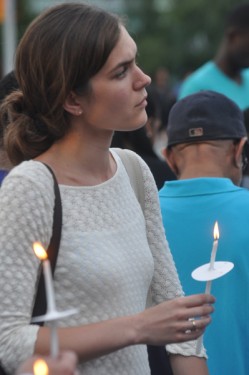 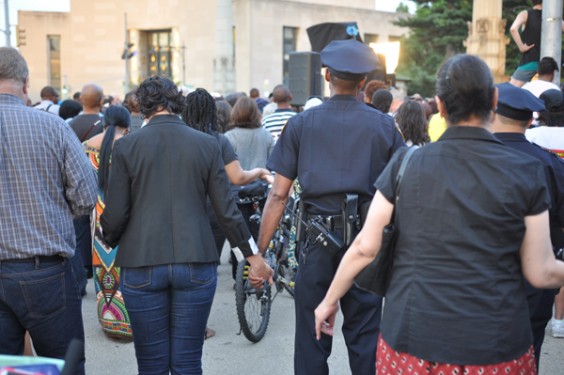 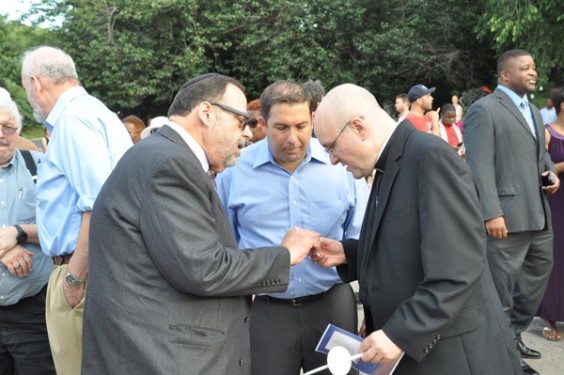 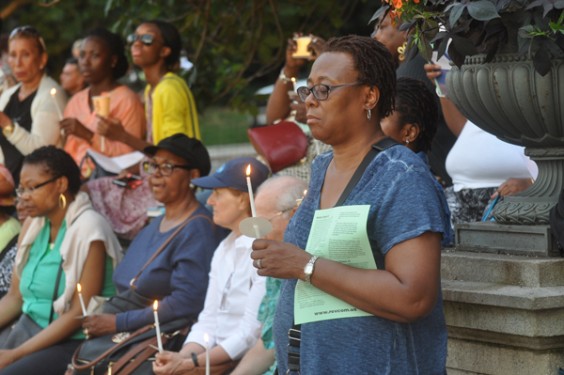 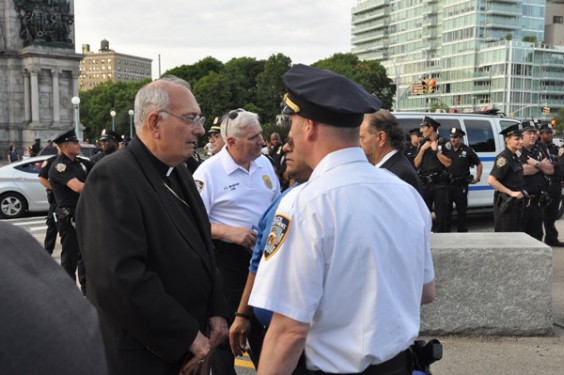 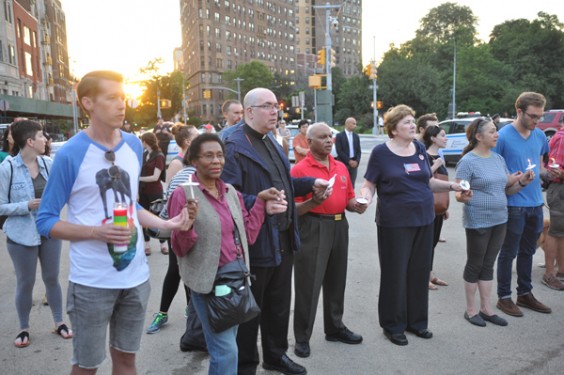 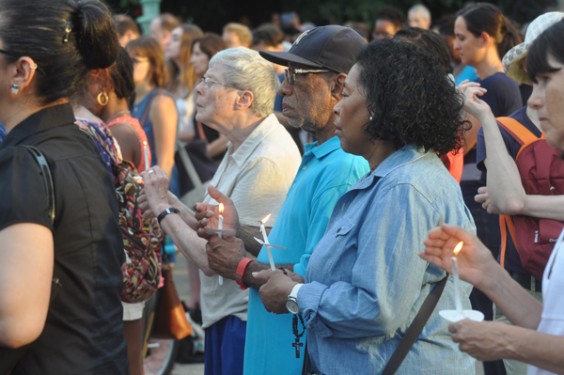 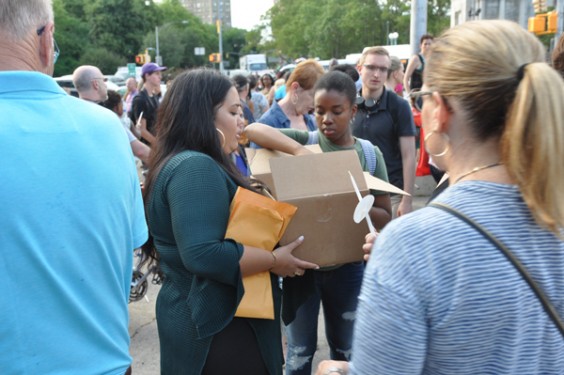 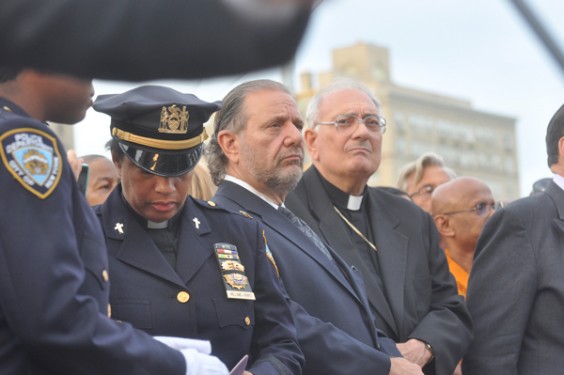 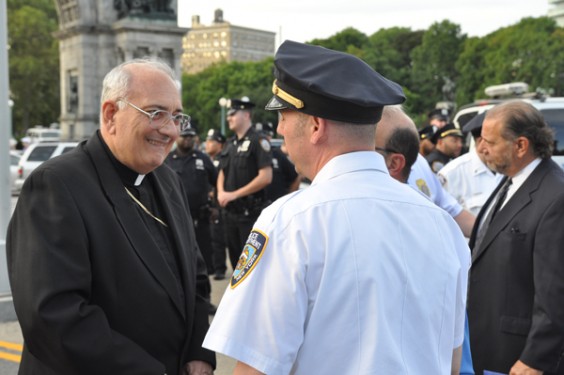 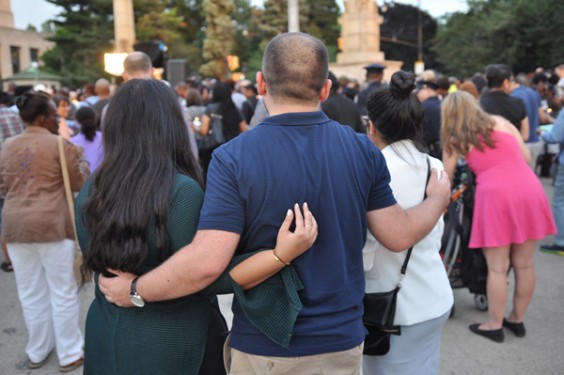 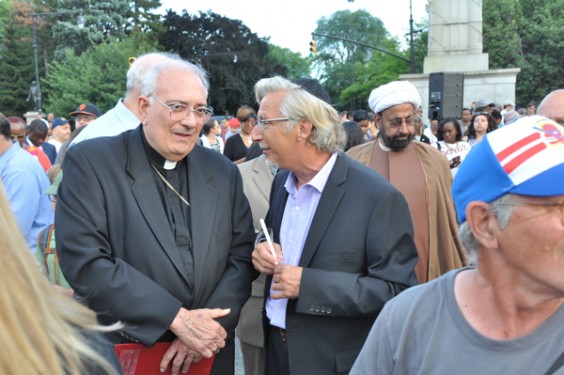 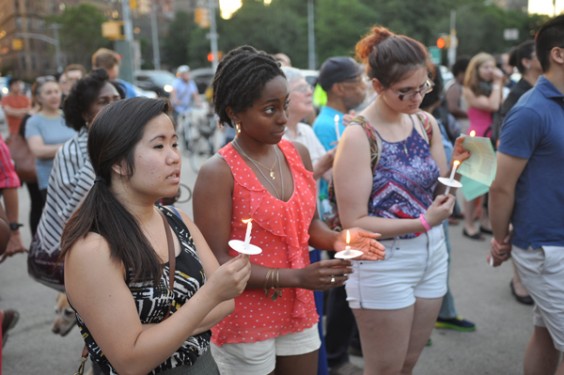 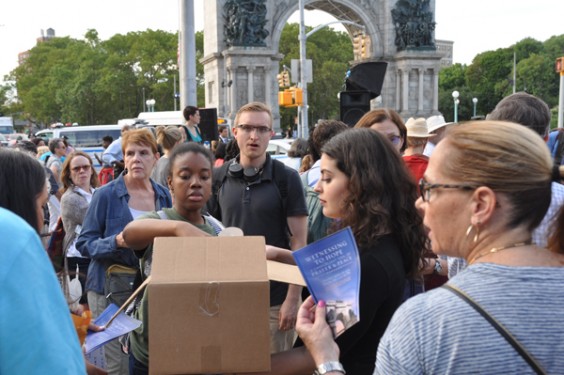 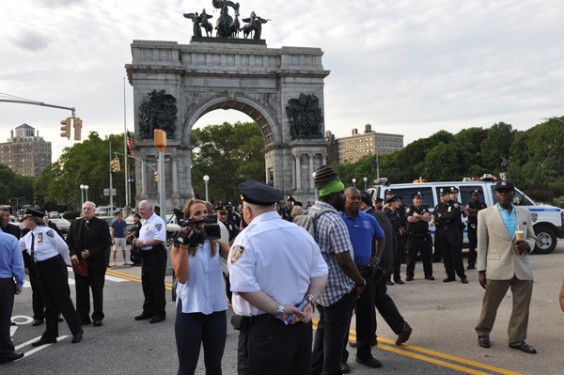 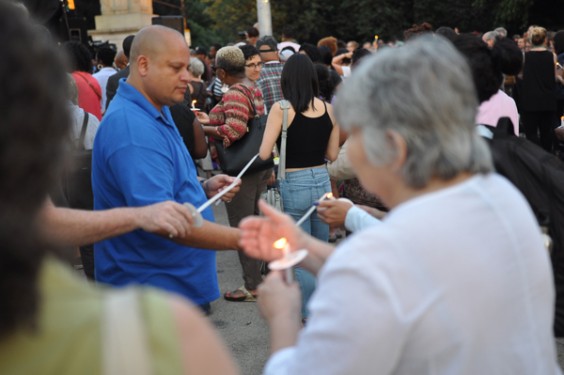 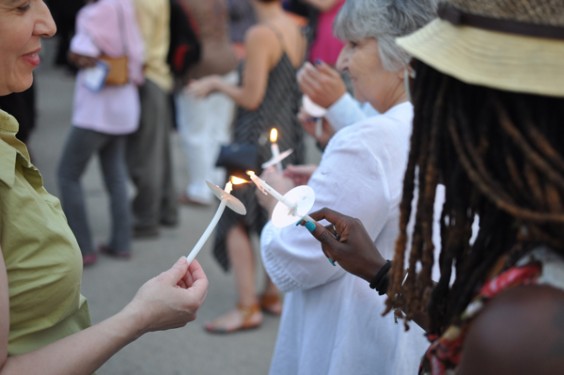 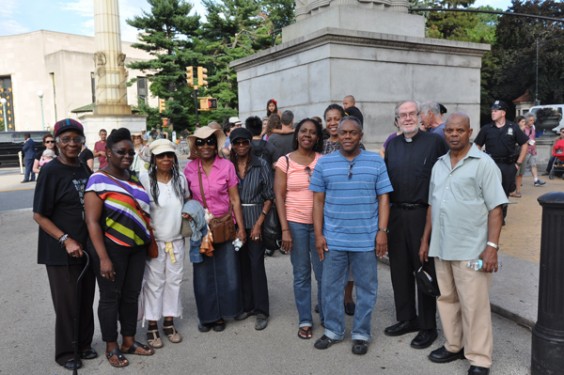 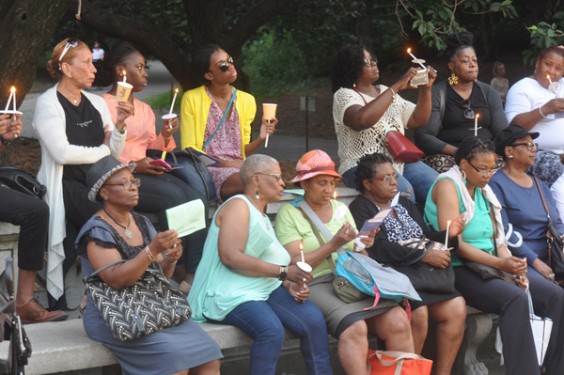 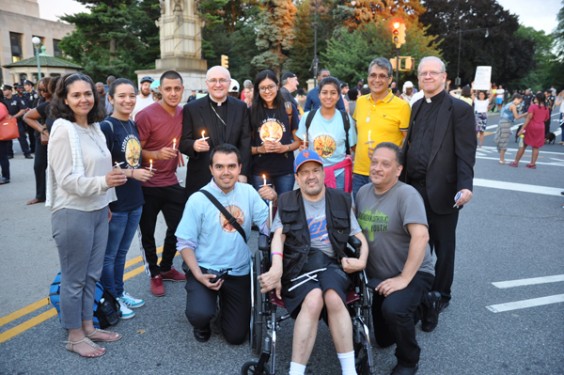 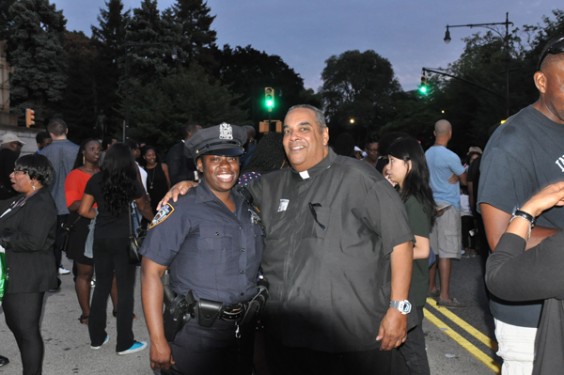 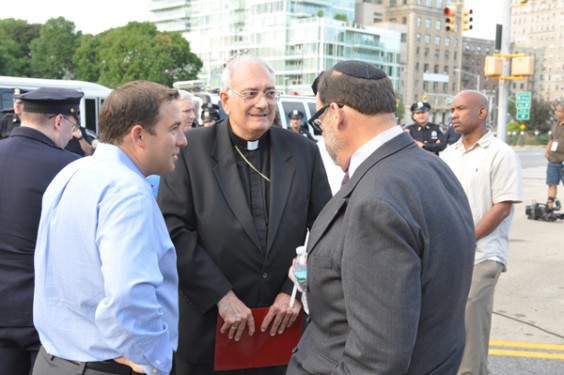 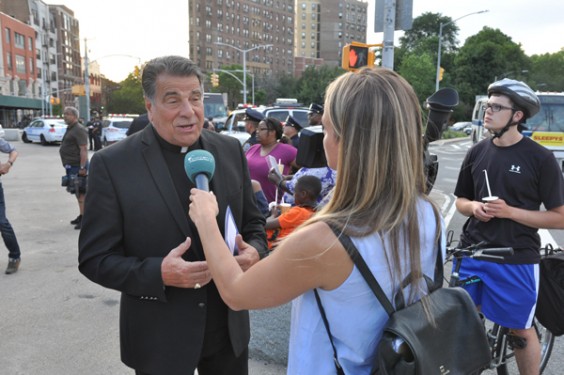 “Why would a man kill five police officers in Dallas? Why would a terrorist kill so many young people in Orlando? We cannot comprehend or make sense of why Philando Castile and Alton Sterling died at the hands of police. Nor can we understand why Officers Brent Thompson, Patrick Zamarripa, Michael Kroll, Michael Smith and Lorne Ahern were murdered as they protected peaceful protestors.”

The bishop prayed, “We come together tonight Father so that the lives of those who died last week might be as seeds that fall to the ground. All things have been revealed to them, Lord and by their prayers, may we come to see one another as brother and sister.”

He alluded to the fact that the prayer service was being held in the shadows of the Brooklyn arch that commemorates those who died in the Civil War that ended the institution of slavery.

“But more needs to be done,” said the bishop.

One by one, religious leaders and politicians delivered a message of peace and calm amidst the violence that has hit the nation in the past week. Invocations were offered by Catholic, Protestant, Jewish, Buddhist, Sikh and Islamic leaders.

“There are no winners when we think that violence is the answer,” said the Rev. A.R. Bernard, pastor of the Christian Cultural Center in Brooklyn. “Violence breeds more violence.”

He asked for organizations and individuals to “model listening” and to sincerely reflect on the issue of racism.

“We need God,” he added. “We need divine inspiration.”

A special invitation to the rally had been issued to local police precincts and hundreds of officers responded. The men and women in blue mixed with the crowd, participated in the service, and also ringed the gathering to provide security. There were no incidents or outbursts during the service.

The unity rally was organized by the Diocese of Brooklyn in conjunction with the Brooklyn Borough President Eric Adams.

“We need the police and the police need the people of this city,” said Adams, who served as a police officer for 22 years. He said that people and police want the same thing – to be able to leave their homes and safely return to them each evening.

Citing the diversity of Brooklyn, he said, “If Brooklyn gets it right, the planet gets it right. Innocent people should not die.”

Rabbi Joseph Potasnik of Brooklyn also noted that “both communities want the same thing. We, the decent, must stand against the indecent in all communities.”

At the conclusion, Bishop DiMarzio asked all to join together in a moment of silence, which was followed by the singing of “Let There Be Peace on Earth,” and an exchange of the sign of peace.

As the crowd dispersed, many stopped to shake hands with and pose for photos with police officers.

Some participants lingered at the plaza following the prayers. Among them was Macho Cordero, a parishioner of St. Matthias, Ridgewood. Having prayed side by side with Protestants, Muslims, Sikhs and others, gave him hope that the country can continue to grow in love and respect.

“If we can come together with so many races and religions, we can live together,” he said, adding that he was pleased to have been invited to three different churches that evening.

Christie Burnham, a resident of East New York and a member of the Christian Cultural Center, said she came to the vigil because the issue is personal to her. She has two sons, 18 and 12, who must navigate their daily lives with a real threat of neighborhood violence and police profiling.

She said she teaches her sons to be respectful of all people. She teaches them to be courteous to officers, even when they are being stopped in the street, to comply with instructions and to know their rights. Nonetheless, from accounts on the news, she fears that this may not be enough.

Though she said she worries for her family, her country and the world, she said she was not afraid to come out to Grand Army Plaza because hope and prayers are stronger than violence. She also came to pray for police officers’ safety and responsibility.

Police officers “want to go home at night to their families,” she said. “There has to be a medium.”

Msgr. Robert Romano, deputy chief of chaplains for the NYPD, said the candlelight vigil was a strong show of unity, and a sign of good will from the police to the community and from the community toward the police.

He encourages all people of good will to continue building bridges between the public and the officers meant to protect them and to not be afraid to be courteous to officers walking in the street by greeting them and making them feel appreciated.

Contributing to this story was Antonina Zielinska.