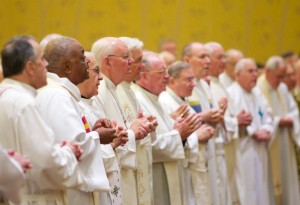 U.S. bishops gather for Mass June 15 before the opening session of the U.S. Conference of Catholic Bishops’ annual spring meeting near Seattle in Bellevue, Wash.

BELLEVUE, Wash. (CNS) – The U.S. bishops June 16 approved a policy statement on physician-assisted suicide, the first on the issue by the bishops as a body, and they also approved revisions to their 2002 “Charter for the Protection of Children and Young People.”

The votes came on the second day of the bishops’ annual spring general assembly held near Seattle in Bellevue June 15-17.
Taking on the issue of physician-assisted suicide in the state where voters most recently approved it, the U.S. bishops hope to counter the recent “strong resurgence” in activity by the assisted suicide movement, said Cardinal Daniel N. DiNardo of Galveston-Houston, chairman of the U.S. Conference of Catholic Bishops’ Committee on Pro-Life Activities, in presenting the document a day before the vote.
In the document, titled “To Live Each Day With Dignity” and approved in a 191-1 vote, the U.S. bishops declared assisted suicide “a terrible tragedy, one that a compassionate society should work to prevent.”
It says if advocates of assisted suicide succeed in their campaign to see it legalized in more and more states, “society will undergo a radical change.”

The revisions to the charter were approved 187-5, with four abstentions. They reflect changes in church law since the last revision in 2005, bringing it into line with recent Vatican instructions in response to the crisis of sexual abuse of minors by priests. These include mentioning child pornography as a crime against church law and defining the abuse of someone who “habitually lacks reason,” such as a person with mental retardation, as the equivalent of child abuse.
They also outline procedures to follow if a bishop is accused of having sexually abused a child and another bishop becomes aware of it.
The experiences of the past nine years have shown that “the charter works,” said Bishop Blase J. Cupich of Spokane said June 15. As chairman of the USCCB Committee on the Protection of Children and Young People he introduced the document to the bishops June 15.
“The charter has served the church well,” he said. “It is a helpful tool as we keep our pledge to protect children, promote healing and rebuild trust.”
The next day before the vote there was little debate on the proposed revisions. But not e

very bishop is on board with the charter’s provisions, as evidenced by the 28 amendments proposed by Bishop Fabian W. Bruskewitz of Lincoln, Neb., and rejected by the committee.
Most of the amendments suggested by Bishop Bruskewitz were aimed at weakening the charter’s wording because, the bishop said in a rationale included with the amendments, “The USCCB bureaucracy cannot bind bishops to obey the charter.”
Retired Archbishop Francis T. Hurley of Anchorage, Alaska, also raised questions June 16 about the “zero tolerance” policy outlined in the charter, which requires the permanent removal of any priest who admits or is found to have abused a child.
But at a news conference held later in the day, Bishop Cupich said a change in the policy would send the message that “we are going to put priest offenders first,” and that is not the case, he said. “We are putting the victims first.”
On the first day of their meeting, bishops also heard a report from Cardinal Donald W. Wuerl of Washington on progress being made toward a U.S. personal ordinariate for former Anglicans who want to enter into full communion with the Catholic Church.
As many as 100 U.S. Anglican priests and 2,000 laypeople could be the first members of the U.S. ordinariate, said the cardinal, who was appointed by the Vatican last September to guide the incorporation of Anglican groups into the Catholic Church in the United States under “Anglicanorum coetibus,” an apostolic constitution issued by Pope Benedict XVI in November, 2009.
At a news conference following his report, Cardinal Wuerl said he “wouldn’t be surprised” if the Vatican were to establish the U.S. ordinariate by the end of the year. “I think it will be sooner rather than later,” he said.
Earlier in the day, the U.S. bishops voted overwhelmingly to authorize preparation of a 50-page document on preaching for consideration in November, 2012.
St. Louis Archbishop Robert J. Carlson presented the proposal on behalf of the Committee on Clergy, Consecrated Life and Vocations, which he chairs, but said the document would be drawn up in consultation with various committees of the U.S. Conference of Catholic Bishops.

Archbishop Carlson said the document would be “at once inspirational and practical, … grounded in the tradition of the church” and would aim to “adequately convey the purpose of the homily at Mass: the personal encounter with the Incarnate Word.”
In other action on the first day of the assembly, the bishops also:
• Agreed by a 194-1-1 vote to integrate the Commission on Certification and Accreditation into the USCCB as a new Subcommittee on Certification for Ecclesial Ministry.
• Got an update from Bishop Salvatore J. Cordileone of Oakland, Calif., about the conference’s efforts to promote and defend marriage.
• Approved, 185-1-3, the use of the Mass texts for patronal feast days of Spanish-speaking countries as an appendix to the eventual Spanish translation of the Roman Missal for use in the U.S.
• Dropped from their agenda without comment a discussion of their perennial “Faithful Citizenship” document on political responsibility.
• Saw a video appeal from Archbishop Diarmuid Martin of Dublin for strong U.S. participation in the International Eucharistic Congress scheduled for next year in his city.
• Heard about a plan to periodically review the mandate of each national collection held in this country.
• Gave a standing ovation to Ken Hackett, who addressed the bishops as he prepared to retire from Catholic Relief Services after nearly 40 years.
• Heard from Father Edward Dougherty, superior general,  Maryknoll Fathers and Brothers, about the 100th anniversary of the organization.