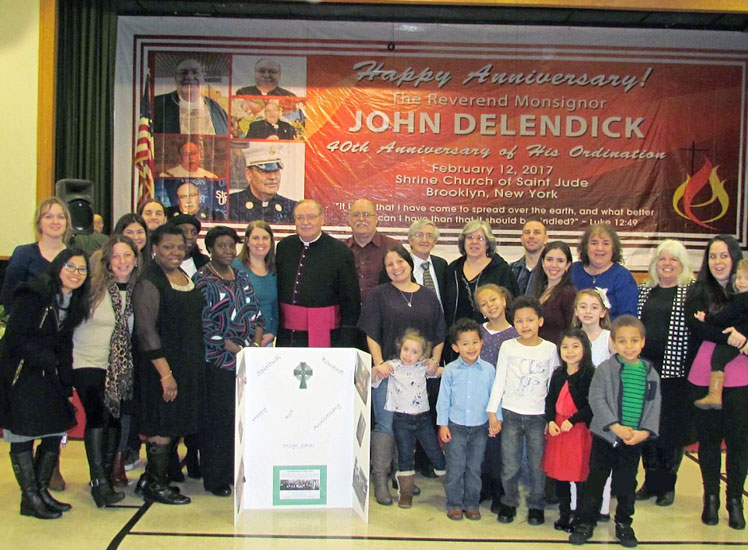 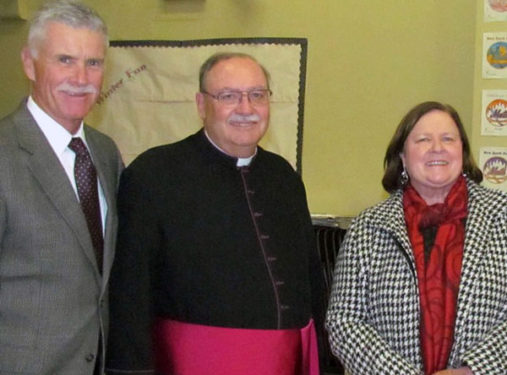 Msgr. John Delendick, pastor of the Shrine Church of St. Jude in Canarsie, and FDNY chaplain, celebrated his 40th anniversary of priesthood with a Mass of thanksgiving and reception at his parish.
The Mass featured an FDNY color guard, and the FDNY Emerald Society Pipes and Drums serenaded the monsignor.
Also present was retired FDNY Chief Edward Kilduff and his wife, Kathy, seen with Msgr. Delendick at left.
(Photos courtesy Teresita Refol)

Good Shepherd parishioner Arlene Cosgrove is presenting a one-woman art show, April 2 in Marine Park’s Carmine Carro Community Center, located at 3000 Fillmore Ave. The three-hour show begins at 12 p.m. and will feature 50 original paintings, including both whimsical and religious subjects.
Exhibiting works depicting the Blessed Mother, saints and guardian angels are an opportunity to evangelize, the artist says.
The wife of Deacon Robert Cosgrove, Arlene has had no formal art training, but she prays as she paints, and asks God for inspiration.
She’s shown her work in secular and religious venues, and sold nearly 600 pieces. All proceeds go to research for Alzheimer’s disease, a cause close to her heart. For directions to the center, call 718-336-0275.

Calling all McAuley girls! The former Catherine McAuley H.S., East Flatbush, is ​hosting an all-years reunion, April 8, 12 p.m. at Russo’s on the Bay, Howard Beach. The event will honor alumnae from class years ending in 2 and 7. Tickets are $125. To attend, email Sister Margaret Dempsey, R.S.M., at mdempseymcauley@gmail.com.

The Frassati Fellowship of NYC will have its spring retreat for young adults, April 7-9 at Villa Maria Guadalupe in Stamford, Conn. Titled “Come to the Feast,” this retreat is adults in their 20s and 30s. The program includes daily Mass, praise and worship, workshops, outdoor recreation and fellowship. For details, go to cometothefeast.eventbrite.com. Registration ends March 24.

Thirty-eight people gave the gift of life during a March 12 blood drive at St. Teresa Church, Woodside. If you missed this event, check the Around the Diocese section for upcoming blood donation events in Brooklyn and Queens parishes.

Save the date for an afternoon tea party and raffle riot, April 30 with the Rosary Society at St. Bernard, Mill Basin, in the parish hall. Enjoy tea sandwiches, cheese platters, salads and desserts while bidding, Chinese-auction style, on prizes. Tickets are $35. Call 718-763-5533.

A New Face at Catholic Charities

Christine L. Chisholm is the newly named senior vice president of Real Estate Development and Management at Catholic Charities Brooklyn and Queens, and chief operating officer of Catholic Charities’ Progress of Peoples Development and Management Corporations.
In these roles, Chisholm directs all aspects of Catholic Charities Brooklyn and Queens’ affordable housing real estate portfolio, and oversees the agency’s housing development, financing, construction and property management activities. She previously worked as chief financial officer of Bowery Residents Committee, Inc., a provider of housing and services for homeless adults. At BRC, she created a new model for financing housing for the homeless. Her model was included in Mayor Bill de Blasio’s Housing New York Plan and was adopted by the City of New York as its homestretch model.