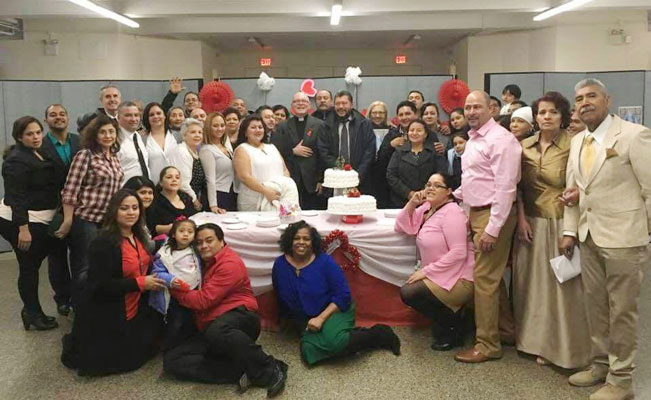 The Sagrada Familia Group at Our Lady of the Cenacle parish, Richmond Hill, recently hosted a Spirit-filled afternoon celebrating marriage and family life. More than 50 couples, who were married in churches all around the world, renewed their nuptial promises and celebrated with their families. The couples and their families are pictured with Father Michael Lynch, pastor. (Photo: Gema Arias)

At the Episcopal Church of the Incarnation in Manhattan, 14 Brooklyn-based artists are participating in an ecumenical exhibition interpreting the Stations of the Cross.
The exhibit is open to the public weekdays, 11:30 a.m. to 2 p.m., and during regular weekday and Sunday religious services. A Stations of the Cross service will be held March 24 at 6:30 p.m. For details, contact Anders Knutsson at 347-515-4044.
(One of the artists in the exhibit, Audrey Frank Anastasi, has her works on display at Tabla Rasa Gallery in Sunset Park.)

The Board of Directors and alumni association of St. Anselm Catholic Academy, Bay Ridge, are hosting a spring homecoming event on April 1. Alumni, parents and past teachers are invited to attend a complimentary cocktail party and enjoy student-guided tours of the school building from 6 to 9 p.m.
Attendees are encouraged to bring photos, yearbooks and memorabilia to share. For more details, call John Thomas at 347-853-4246, or Linda Gallagher-Lomanto at 917-733-6764.

From Here to Haiti will host its annual Art Show Fundraiser, featuring the works of over 75 Haitian and international artists, April 22 and 23, 1 to 6 p.m. in Whitestone. A special collector’s preview will be held April 21. For details, contact Patricia Brintle of St. Luke’s Church, Whitestone, at 646-209-2891.

This week’s Tip of the Tablet TALK Top Hat goes to Deborah Aquila, Class of 1976 from Bishop Kearney H.S., Bensonhurst, on winning the Artios Award for Outstanding Casting for the Oscar Award-winning film, “La La Land.”

Aquila has been nominated 15 times by the Casting Society of America for its Artios Award. In 2011, she won for Outstanding Casting for the comedy, “Red,” and the following year, she won the same award for the feature, “My Week With Marilyn.” In 2003, she was recognized by the Hollywood community with the Hollywood Film Festival Career Achievement Award. 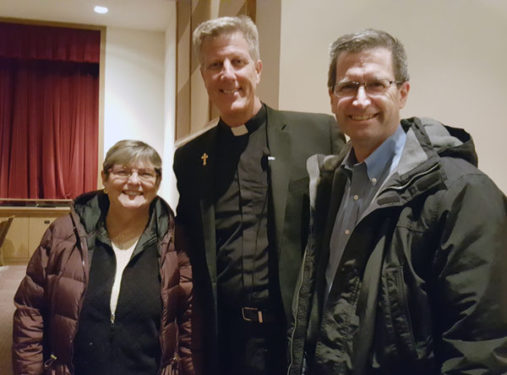 Family Night at The Movies

Family Night at the Movies, sponsored by Queens Deanery No. 5, was held at the Immaculate Conception Center, Douglaston, last month. Parishioners and guests from the 10 parishes in the deanery viewed the film, “Heaven Is For Real,” which was followed by a small-group discussion. This was the second in a series of Family Movie Nights the deanery is planning. Above, Father Mark Matthias from Our Lady of the Blessed Sacrament, Bayside, is seen with two moviegoers. (Photo courtesy Father Kevin McBrien)