Team captain Danielle Patterson has been an unstoppable force this season for the Hilltoppers, which earned her the national honor.

Despite all her individual accolades this season, Patterson has been committed to the overall team’s performance since day one. The Hilltoppers emerged victorious over Christ the King H.S., Middle Village, in the GCHSAA ‘AA’ diocesan championship, defeated Msgr. Scanlan H.S., the Bronx, for the ‘AA’ city championship title and then beat Msgr. Scanlan again in overtime to become state champions.

Patterson said that at the beginning of the season, each member of TMLA’s team wrote down the goals they wanted to accomplish this season.

“When I wrote down those goals, I said the main thing I wanted to do was win championships this year,” she said. “It really wasn’t anything about being an All-American.” 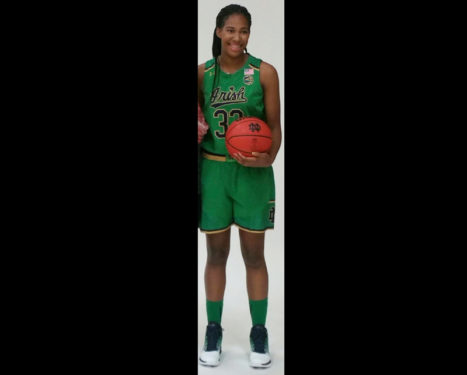 But luckily for Patterson, she’s been able to experience plenty of individual and team success this season.

The senior center is one of 12 players competing for the East squad against the West on March 29 at the United Center in Chicago as part of the 16th annual McDonald’s Girls’ All-American Game, which will air on ESPN U at 5 p.m. EST.

Patterson averaged a double-double this season, with 23 pts. and 11 rebounds per game while also adding four assists per game. She is a nominee for New York State Player of the Year and will be playing in the Jordan Brand Classic game April 14 at Barclays Center.

The journey to basketball dominance began as a Catholic Youth Organization player for St. Mary Gate of Heaven, Ozone Park. She played her first two years of high school ball at Medgar Evers College Preparatory School, Crown Heights, before transferring to TMLA for her junior year.

After a strong junior season – which earned her a nod as a First Team Division I Tablet All-Star in 2016 – Patterson said she focused this past offseason on evolving her game in order to play the center position.

“A lot of my career I’ve been someone that wants to put my head down and go to the basket,” she said. “But as I’ve had to deal with more double-teams and triple-teams on the inside, I’ve been working on my shot a lot and ball-handling, so I think that’s been big.”

Patterson said she was surprised and excited to be named an All-American. On the night of the announcement, the Hilltoppers had a game at Nazareth H.S., East Flatbush. Once the game ended, Patterson followed along with ESPN on her phone, and when she got home, she already had ESPN set to her TV.

“Literally as soon as I walked in the door, I saw my name on the screen,” the All-American said.

She is set to continue her basketball career at the University of Notre Dame, South Bend, Ind. Just like she left her mark at TMLA, she’s looking to make an immediate impact for the Fighting Irish while also earning a top-notch education.

“It was just the right fit,” she said. “In many ways, it felt like Mary Louis.”

As she takes her game to the next level, Patterson will surely rely on her time at TMLA as she prepares to become a contributing member to a Division I college hoops program.

And it certainly helps too that she’s a well-deserving All-American.

Have a story idea for the “Good Sports” page? Please contact Jim Mancari via email at jmmanc@gmail.com.