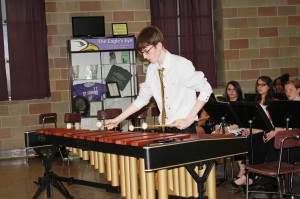 He performed a solo of “Four Rotations for Marimba” by Eric Summut and was later joined by  percussionists Harun Bonnett and Nicholas Grasso for “Movement IV Despidada (Farewell)” by Ney Rosauro.

Stapleton is currently a percussionist with the New York Youth Symphony Orchestra which presents concerts throughout the year at Carnegie Hall.  He is also a student at the New York Youth Musicians and has performed at Merkin Hall in Manhattan.

Every summer he participates in the Interlochen Arts Music program studying with the finest young musicians of high school age.

He will soon be a member of the World Youth Symphony Orchestra. In September, John will be attending the Boston Conservatory of Music on a partial scholarship where he will be pursuing a Bachelor’s Degree in Performance which is the highest degree in music studies.

According to John Malazzo, music teacher and conductor at St. Edmund Prep, “John has been an amazing leader in our band program at the Prep.”