After sharing memories and shedding tears, Jornadistas said their final farewell to the SS. Peter and Paul Spirituality Center in Cobble Hill on July 1, before processing to their new home at Transfiguration Church, Williamsburg, for a midnight Mass.

The Diocese of Brooklyn is closing both the Brooklyn and Queens campuses of the SS. Peter and Paul Spirituality Center this summer.

The Brooklyn campus, located at 118 Congress St., was run for nearly 50 years by Spanish Vincentian Fathers until the retreat house became part of the SS. Peter and Paul Spirituality Center three years ago. The building will be sold. 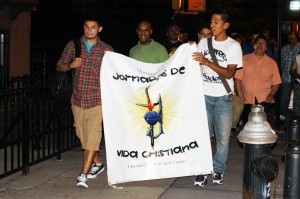 Three diocesan Spanish ministries that were based at the Brooklyn site are relocating. The Cursillo Movement, which has been in Cobble Hill since the beginning, is taking up residence at St. Michael-St. Malachy, East New York. As for the two youth movements, Jovenes de Valor is going to St. Rita, East New York; and the Jornada Movement is making its home at Transfiguration at the invitation of Msgr. Anthony Hernandez, pastor. Each movement will hold its meetings and reunions at the parishes.

The Queens campus, based at the Immaculate Conception Pastoral Center, Douglaston, will be closed as a result of Cathedral Seminary Residence’s merger with the archdiocesan Neumann Residence. The space, which was used for various diocesan retreats, most notably the English Cursillo, will house college seminarians.

In September, the diocese will open a new retreat center in the former Xaverian Brothers’ residence at Nazareth Regional H.S., Flatbush. Displaced ministries have been invited to hold their retreats at the facility. Deacon Carlos Garcia, assistant director of the SS. Peter and Paul Spirituality Center, will be the new retreat director.

“Every change brings with it sacrifice and challenge but also invitation and opportunity. … We’re grateful to Bishop DiMarzio for providing a ‘new space and home’ for this spiritual work/care to continue in the diocese,” said Father Joseph Fonti, director of the SS. Peter and Paul Spirituality Center.

Last week, hundreds of Jornadistas returned to the red brick building on Congress St., the only home the movement’s known in its 44 years. Equipo Base, the lay leadership arm, organized three days of farewell events, starting June 29 with a Closing Mass, which drew nearly 300 Jornadistas from the tri-state area. Many returned the following evening for a joint prayer service with the Cursillo Movement. 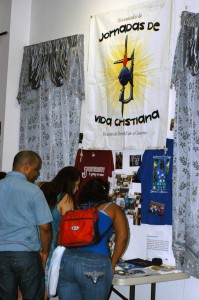 As twilight fell Friday, Jornadistas, past and present, congregated at the main door. Whether they called the building the Cursillo Center, Casa de Cursillos, CC House, Centro de Evangelizacion de San Vicente de Paul or by its present name, all knew it as the place where they found friends, created a family and most importantly, came to know and grow in love for Chuito (Christ). The evening offered time to reflect and pray before going to Transfiguration, where the parish community, pre-Jornadistas, and friends welcomed the crowd.

Among those who returned was Jose Roman, who lived the first Jornada retreat in October, 1972, from Our Lady of Perpetual Help parish, Sunset Park, and remained active in the movement until 1983.

CC House was a place of spiritual awakening for him, but also where he could share his fears of being drafted and he could stay away from gangs and drugs. As he grew older, it was a place where he mentored other youth, helping them to know God.

Though it’s hard to let go of the building, he said, “It’s important to remember the movement is within us. It’s not a structure.  We embrace it and carry it with us wherever we go.”

Gabriel Marocchi, J97, photographed and videotaped the event for the movement’s website.

He recalled the Vincentian Fathers, who founded and directed the movement for four decades, including Father Victor Dallo, C.M., former spiritual director, and Father Astor Rodríguez, C.M., parochial vicar, St. John the Baptist, Bed-Stuy. Sister Claudia Paredes, C.C.V., who attended the Mass at Transfiguration, was another “important icon” in the movement, he said.

We Move, We Evangelize

“We’re called a movement for a reason – we move, we evangelize,” said Gustavo Medina, J148.  “It wasn’t the House that made this movement what it is, it was God.  We cherish the memories and we move on.  It’s time to live our apostolado.”

As Jornadistas prepare to live their apostleship in Williamsburg, Father James Kuroly and Deacon Jimmy Garcia, J66, the movement’s spiritual directors, have been working to ensure the transition is smooth. Father Kuroly led a 30-day Rosary to strengthen them for the move. 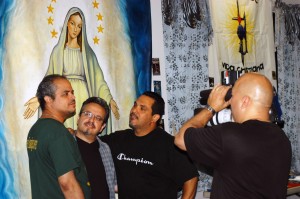 “For Jornadistas, the world is now in Williamsburg. Transfiguration is our home,” said Father Kuroly, who noted that Msgr. Hernandez has been hospitable to the movement. “We are following Jesus’ message of going out to the world. I think it’s going to be a great opportunity to evangelize.”

“The special thing about the House is that we all found God here. … What we’re leaving behind is an empty building. God is with us wherever we go,” he said.

Crespo led Jornadistas in singing “Adiós con el Corazón,” as they processed through the building one last time. Once everyone was outside, Father Kuroly turned off the lights, slammed the front door and pulled the gate shut, declaring the center closed. Equipo Base members hung purple bunting on the gate and a hush fell over the crowd.

His face streaked with tears, Crespo broke the silence with the call, “Jornadistas?” to which the crowd responded, “Presente!” Jornadistas then set out to bring their unique presence to Marcy Ave.

“The Jornada Movement will be different,” Crespo admitted, “but we’re going to make it work.”