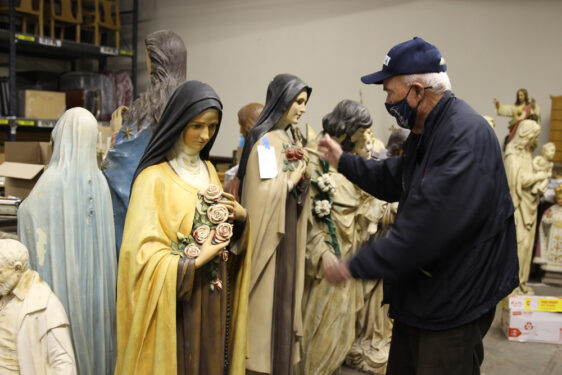 Monsignor John Bracken talks about the various St. Theresa statues, and other statues of saints, that are housed at the Diocese's warehouse. (Photos: Erin DeGregorio) 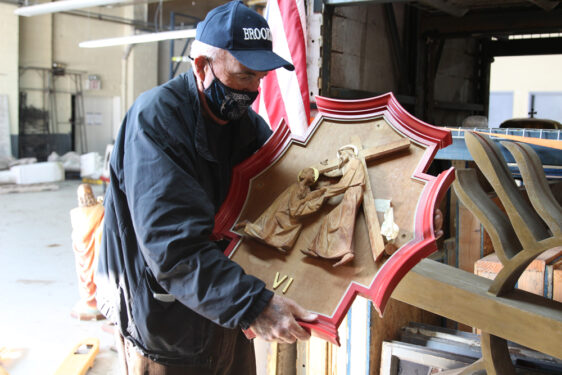 Msgr. Bracken holds a wooden plaque of Station #6 (Veronica wipes Jesus' face) of the 14 Stations of the Cross plaques from Bishop Ford High School, which permanently closed in 2014. 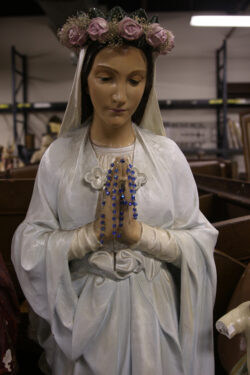 Statue of Mother Mary with blue rosary beads and a flower crown. 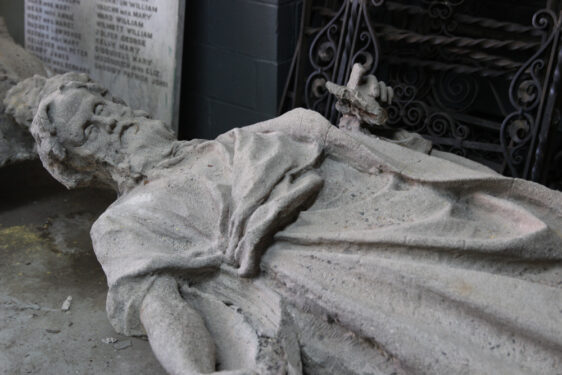 One of the warehouse's older statues, which would have been found outdoors. 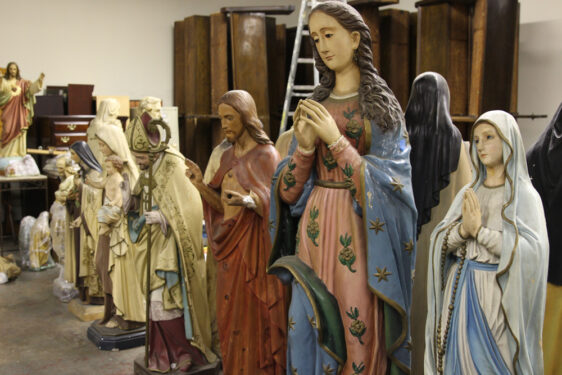 The warehouse holds a variety of items in storage, including statues of Mary, Jesus, and many other religious figures. 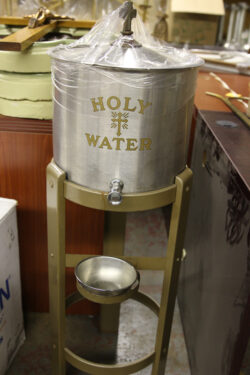 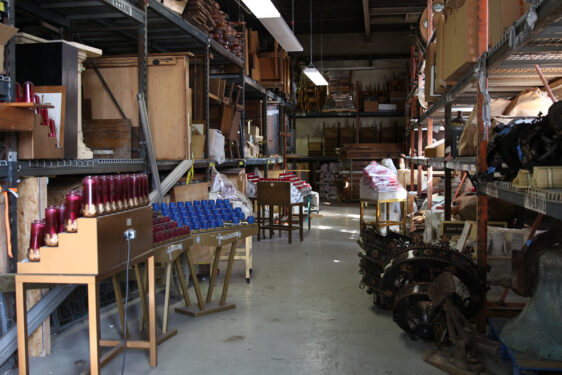 The first aisle of the warehouse, upon entrance, that mainly featured electric candle set-ups, lighting fixtures, and furniture. 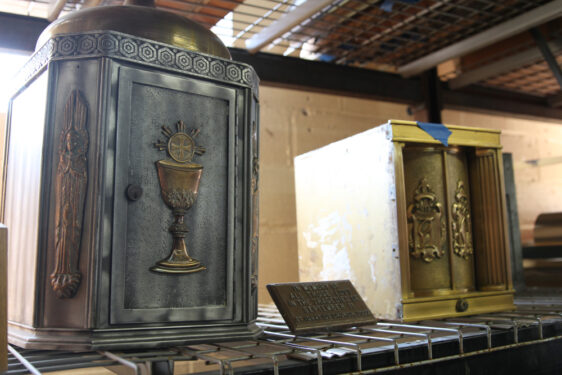 Metal tabernacles (left and right) and a 9/11 memorial plaque from St. Ignatius Church in 2002 (middle) in storage. 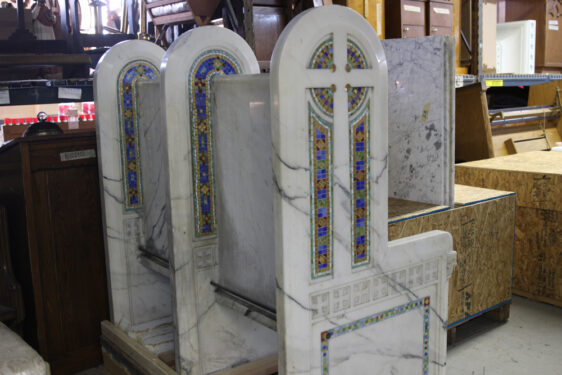 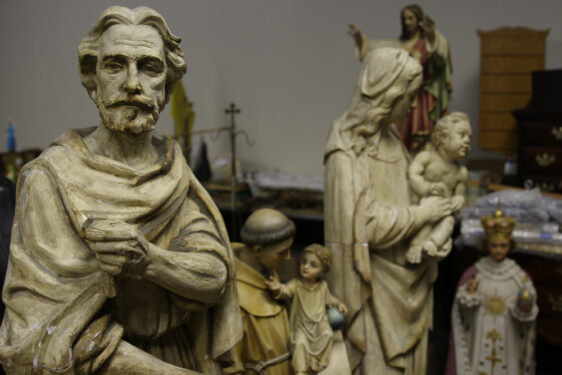 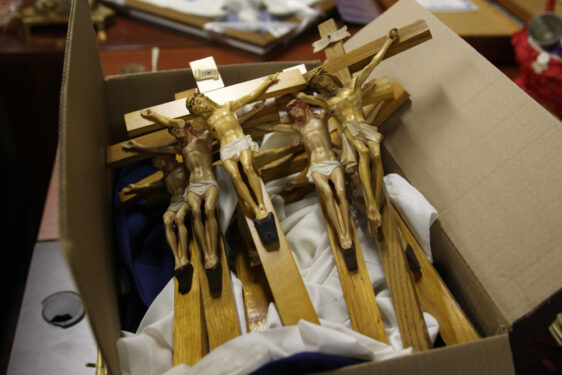 A box of wooden crucifixes 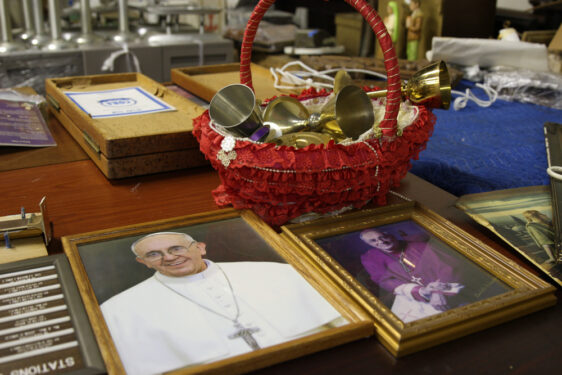 Framed photos of Pope Francis and Bishop DiMarzio in front of a basket filled with assorted chalices.

BUSHWICK — For the last 12 years, the Diocese of Brooklyn has been collecting and housing hundreds of religious artifacts from renovated churches and chapels in its own warehouse. One can find century-old stained glass pieces, wooden crucifixes, life-sized statues of saints, and more in the former auto dealership and repair shop space, which was purchased by the Diocese after the Our Lady of Lourdes Parish tragically burnt to the ground in 1975.

Msgr. John Bracken, the diocese’s former vicar general and current director of the Office of Patrimony, has been overseeing the warehouse for the last decade and taking inventory.

“You’re talking history here. All of these objects were devotional donations from people of generations ago,” he said while standing in one of the large rooms that predominantly stores old lighting fixtures, hand-carved wooden pews, and boxed-up stained glass windows. “I feel like a custodian of the heritage of the diocese.”

He continued, saying, “Being able to take something that was so meaningful to people who lived 100 years ago, to place it in the home of a church, where it will be venerated again, means that the history continues. The river of faith continues to flow here richly in Brooklyn.”

Following a church or school closure, religious objects are appraised, photographed, and packed for transport to the warehouse.

“Once it’s here, then it becomes available for use by other parishes, churches, and dioceses. We don’t want things that are given as devotional items by people of [previous] generations to wind up in the wrong places,” Msgr. Bracken said, noting that the items always stay within the church community. “Anytime I get a phone call from a parish who’s looking for things in our diocese, we’re able to make arrangements and get those items sent to them, where they’ll be used for proper purposes.”

If pastors find a particular item that they would like to have, they make a monetary donation to acquire it. Suggested donations vary depending on what the item is made of, such as marble, plaster, or wood. Though some objects have been in the warehouse for years, Msgr. Bracken is confident that they will find new homes, one day.

For example, following the 2010 earthquake in Haiti, a group of dedicated lay people requested wooden pews for their local church, to which Msgr. Bracken was able to arrange a cargo shipment to that mission parish. Additionally, a giant, stainless steel statue of Our Lady of the Skies found its new home in Costa Rica, which Msgr. Bracken found to be “very moving.”

Msgr. Bracken and his warehouse associate, Tom Fiero, are also working on a request from the Diocese of Rockville Centre to send some items from St. Rocco’s — which closed and merged with St. John the Evangelist in 2011 — to one of its mission parishes in the Caribbean.

“There is somebody who’s going to want something. And when they give us a call, they’ll come, look, and say, “That’s just what I’ve been looking for,’ ” Msgr. Bracken said. “Other materials, like beautiful oak doors, are sitting here. Someday, somebody’s going to say, ‘I could use that.’ ”

A few historic pieces have come and gone from the warehouse over the years, including the original altar from St. Vincent de Paul, which was a replica of the high altar seen at St. Patrick’s Cathedral in Manhattan and designed by architect James Renwick, Jr. When the Williamsburg church closed in 2011, Msgr. Bracken said the 30-ton, marble altar was later dismantled into nearly 7,000 large and small pieces.

However, in 2014, the Holy Name of Jesus Parish in Windsor Terrace asked Bishop Nicholas DiMarzio if they could have that altar as the church was undergoing renovations.

“They took it piece by piece, put it into Holy Name, and rebuilt it,” he added. “It’s a piece of beautiful architecture from the 1880s that now can be seen in a different church.”

With that kind of history in mind as he walked up and down the aisles of the warehouse, Msgr. Bracken reiterated the importance behind the unspoken amount of history and reverence housed within those walls.

“You look at things, you see the history and read the inscriptions of the memorials on some of the items — it just puts you in touch with people and with what a great heritage and tradition we have,” he said. “To be able to preserve the items that come from [places] when they close is a real pleasure.”