As Bishop of the Diocese of Brooklyn, one of my most important responsibilities has been, and continues to be, addressing the pain caused by the sexual abuse of minors by members of the clergy in Brooklyn and Queens.

As we know, sexual abuse is a shameful and destructive problem that is found in all aspects of society, yet it is especially egregious when it occurs within the Church and such abuse cannot be tolerated. We are deeply committed to providing safe environments for all of our faithful, especially for minors and vulnerable adults, as well as providing outreach and assistance to victims-survivors of abuse.

One of the first steps that I took in addressing this issue was the establishment of an independent toll-free Reporting Line early in 2004 shortly after I arrived as Bishop of Brooklyn. The number is 1-888-634-4499. Anyone who has a claim of sexual abuse against a member of the clergy, diocesan employee, or parish volunteer is strongly encouraged to contact the authorities themselves or call the Reporting Line.

Once a call is made to the Reporting Line, a report is generated, independently of the Diocese of Brooklyn, and is sent to the office of the corresponding District Attorney in either Brooklyn or Queens, as well as to my delegates, who are charged with addressing these matters.

If, for whatever reason, the District Attorney’s office chooses not to take action on the complaint, that complaint is referred to the Diocesan Review Board, when the matter refers to a member of the clergy. Should the Review Board, which is comprised of former law enforcement officers, lawyers with experience in family law and child abuse, healthcare professionals, mental health professionals and a pastor, find that the claim is credible, the matter is then sent to the Vatican for the permanent removal of the cleric from public ministry. (The definition of credible means that Diocesan officials believe that the allegations may be true.)

In an effort to reach as many victims as possible, in 2017 the Diocese of Brooklyn initiated an Independent Reconciliation and Compensation Program (IRCP), which was administered by Mr. Kenneth Feinberg and Associates. This program consisted of two phases. The first phase involved all the victims who had been known to us prior to the announcement of the IRCP. The second phase involved those who made their allegations after the program’s inception. As the program draws to its completion, an assessment of the data gleaned from it indicated that prior to 2002 we were aware of approximately 14 percent of the cases. Between 2002 and the launching of the program is when we became aware of a large number of cases. Now with the launching of the IRCP we became aware of the greatest amount of allegations. The chart below illustrates this important fact. 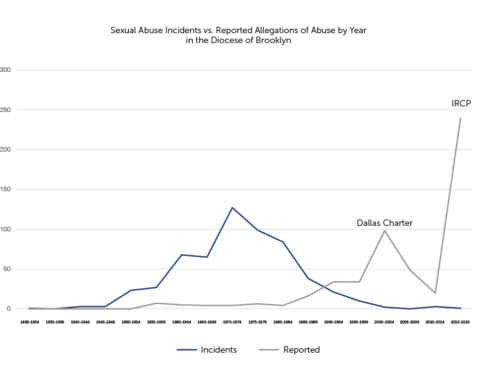 Out of justice, we will continue to search for additional victims of abuse and we will be conducting a private compensation program for those who wish to participate.

This past fall, I conducted four regional meetings with members of the faithful of the Diocese in Brooklyn and Queens to discuss the clergy sex abuse crisis and our response to it, which includes the important work of the Office of Victim Assistance, as well as the Office of Safe Environment.

These meetings provided an important opportunity for frank discussion on this issue. In our continued commitment to greater transparency, I informed the participants that I would be publishing the names of all members of the clergy against whom an allegation of sexual abuse of a minor had been found credible. Today, that list can be found on our diocesan website (www.dioceseofbrooklyn.org).

The individuals named on this list have either admitted to sexual misconduct with a minor, or have had allegations filed against them that have been found credible by the Diocesan Review Board, or through the IRCP process. The percentage of those on the list who are deceased is approximately 60 percent.

It is my hope that the publishing of this list will provide some assistance to those who are continuing the difficult process of healing, as well as encourage other victims to come forward. Sexual abuse is a heinous, sinful crime and we as a Diocese are committed to remaining vigilant against such abuse.

One thought on “A Heinous, Sinful Crime”