BROTHER MICHEL Bettigole, O.S.F., died on Sept. 2 of this year, and reading his obituary brought back many memories.

We worked together on several television shows when he was on the Brooklyn Diocesan Television team. I always enjoyed talking with him and profiting from his insights into both television and culture. The obituary also reminded me of the wonderful work he did at Bishop Ford H.S., Park Slope, and at Cardinal Gibbons H.S. in Raleigh, North Carolina.

Of course, in a life filled with service to the Church, as Brother Michel’s was, no obituary is going to be complete. The death notice mentioned that Brother Michel had edited three books. One of those books I know very well because he and I discussed it when he was working on it.

Before it was published, he asked me, along with three others, to write a comment about the book that would be published alongside the title page. My comment was the following:

“This book is just what the Catholic community needs at this moment. Those of us teaching Catholic literature and studying films for ideas and insights that either explicitly present or implicitly point toward truths of the Catholic faith will welcome this new volume.”

“A fine introduction to Catholic literature and culture in a time that greatly needs just this. I give this collection for young Catholics a strong endorsement.”

“This book understands fully that the Catholic tradition is incarnational. The judicious selection of texts drawn from literary and artistic sources will illuminate that fact superbly.” 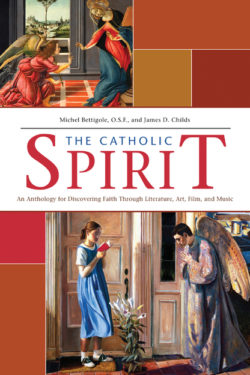 The title of the book, which was co-edited by James D. Childs, is “The Catholic Spirit: An Anthology for Discovering Faith through Literature, Art, Film and Music” (Notre Dame, Indiana: Ave Maria Press, 2010, pp. 472).

Brother Michel was able to put between two covers many ideas and insights that have both preoccupied and inspired me since I began teaching philosophy many years ago, first at a college seminary and then at St. John’s University.

When Brother Michel told me what he was trying to do with the book, I thought he had a fabulous idea. When I read the book, I thought he had succeeded beautifully. Though the collection was intended primarily for high school students, I think it could be used profitably in some college theology courses. In fact, I am going to speak to my colleagues who teach theology at St. John’s University and encourage them to consider using the book in some of their courses.

The book presents several work projects that are to be done by students, but those should not limit the reading audience to those enrolled in high school or college courses. I can imagine the book being used in adult education courses. I also think that it would be an excellent book to be read in a discussion group. Discussing it over a period of months could be a wonderful educational experience.

In the general introduction to the book, the editors wrote the following:

“The purpose of this collection of classic and modern readings and works of visual and performance art is to help students understand the teachings of Catholicism in a personal way, to bring the tradition of the faith to life, and to make real the life of grace. In this anthology, students and teachers will be exposed to classic expressions of faith that convey the riches of the Catholic religious vision. This vision has an intellectual content, a series of beliefs that have been passed down throughout history from one generation to the next.” (p.2)

When the book was published, I imagined that it would be used in many high schools. When Brother Michel told me it was not picked up by many, I was stunned. When asked him why, he told me that he suspected that the schools did not have teachers sufficiently prepared to teach it. If his suspicion was correct, that is really bad news. Would that be another sign of how secular we have become?