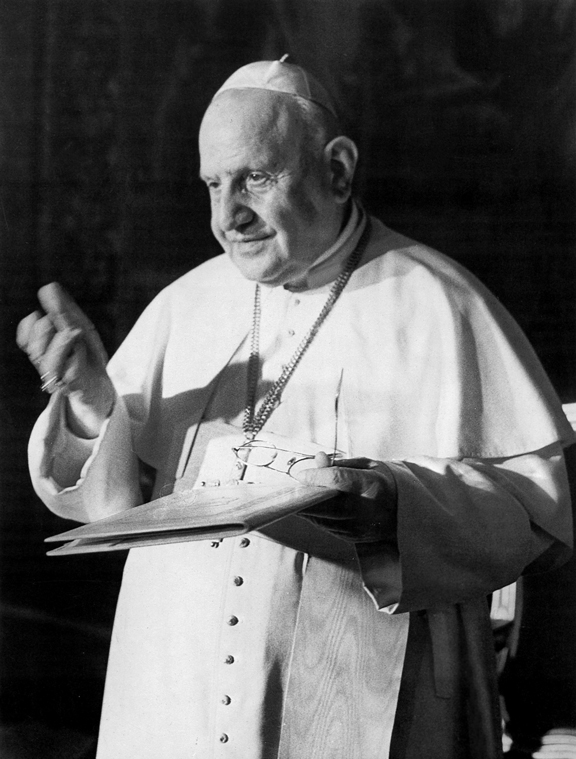 VATICAN CITY (CNS) – The life of Blessed John XXIII is a lesson in how obedience and trust in God lead to an interior peace that is naturally recognized by and shared with others, Pope Francis said.

Joining a pilgrimage of 3,000 people from the late pope’s home diocese – Bergamo, Italy – Pope Francis prayed at the tomb of Blessed John June 3, the 50th anniversary of his death.

Bishop Francesco Beschi of Bergamo told Pope Francis that he reminds many people of Blessed John, especially with his gestures and his “evangelical liberty.” Pope Francis replied that those characteristics come from the Lord and added that he could comment further but would do so with the bishop privately.

Turning serious, Pope Francis told the pilgrims: “The whole world recognized Pope John as a pastor and father. A pastor because he was a father.”

Blessed John was and still is referred to by many as “the good pope,” Pope Francis said. “How wonderful it is to find a priest who is really good, filled with goodness.”

The pope, a Jesuit, said he wasn’t trying to give the founder of his order special publicity, but Blessed John’s reputation for goodness “reminds me of something St. Ignatius of Loyola would tell the Jesuits about the qualities a superior had to have. He would list this and that – a long list of qualities – but in the end, he would say if he doesn’t have those qualities, at least he must have much goodness, be a father, a priest with goodness.”

The 76-year-old Pope Francis told members of the pilgrimage, “Those like me, who are of a certain age, remember well the emotion” surrounding the last days of Pope John’s life in 1963. “St. Peter’s Square became an open-air shrine, day and night welcoming faithful of every age and social condition in trepidation and prayer for the pope’s health,” he said.

Blessed John was “an effective weaver of relationships and a valid promoter of unity, inside and outside the church community,” the pope said. He was “open to dialogue with Christians of other churches, with exponents of the Jewish and Muslim worlds and with many other people of good will.”

The pope told the Bergamo pilgrims that from reading Blessed John’s Journal of a Soul, it is clear that his peacefulness was the result of a spiritual journey marked by discipline, by recognizing and taming selfish desires and by an obedience that allowed the Holy Spirit to work through his superiors.

For Blessed John, obedience meant “undertaking in the church the service his superiors asked of him, without seeking anything for himself, without holding back anything asked of him, even when that meant leaving his homeland, facing a world he didn’t know and spending years in places where there were very few Catholics,” the pope said.

The notion of spiritual discipline is one that needs to be rediscovered, Pope Francis said. “If we learn to let ourselves be led by the Holy Spirit, if we learn to mortify our selfishness to make room for the love of the Lord and His will, then we will find peace, then we will know how to be peacemakers and spread peace around us.”

Pope Francis said Pope John’s decision to convoke the Second Vatican Council, which opened in October, 1962, was the result of a “prophetic intuition” based on his “love for the tradition of the church and his awareness of its need for constant updating.”

The council and Pope John’s “offering his life for its good outcome,” he said, are “a shining light for the journey ahead of us.”

Pope Francis told the Bergamo pilgrims that they were right to be proud of the pope who came from their region; “preserve his spirit, deepen your study of his life and writings, but, especially, imitate his holiness.”

Blessed John XXIII was born Angelo Roncalli in Sotto il Monte Nov. 25, 1881. He was ordained a priest for the Diocese of Bergamo in 1904. Between 1925 and 1944, he served as a Vatican diplomat in Bulgaria, Turkey and Greece. After his service in the diplomatic corps, he was named archbishop of Venice in 1953.