If the early-action college acceptances that have been coming in are any indicator, the members of Xaverian H.S.’s Class of 2016 will continue to uphold the Bay Ridge school’s reputation for stellar college placements.

Senior Isaac Jean-Francois has earned acceptance to Columbia University, where he plans on majoring in biology with a concentration in women’s and gender studies.

Isaac is a member of Xaverian’s speech and debate team, as well as the Young Democrats Club and Music at Xaverian. He has also taken part in volunteer service at CHIPS Soup Kitchen.

Isaac attributes the education he has received at Xaverian as the main reason for his impressive college acceptance, saying, “Speech and Debate has been an amazing asset for college prep. Also, the advanced courses under the teaching of AP and college professors have been unparalleled. I think Xaverian has given me the chance to find myself in ways that no other school can. This is truly a family environment that protects, cares, and nurtures all of those involved in the community.”

Francis has been involved with myriad extracurriculars during his time at Xaverian, including swimming, soccer, lacrosse, pipe and drum corps, and mock trial.

While he is still weighing his options as to where to pursue his higher education, Francis is certain that his experiences at Xaverian have played a critical role in preparing him for college.

“Xaverian has allowed me to grow both academically and spiritually,” Francis said. “It’s given me very rigorous and challenging academic courses, while still allowing me to join sports and activities that have helped me develop into a well-rounded person. Xaverian has also played a huge role in the development of my faith through community service and retreats,” he added.

Although the majority of the members of the Class of 2016 are still eagerly awaiting their college acceptance news, it seems likely that they will live up to the precedent of impressive college placements set by recent graduates. In the Class of 2015 alone, there were five students who earned acceptance to Cornell University.

The Class of 2015 was awarded scholarships totaling $25,012,637 and its members earned acceptance to a rich array of colleges and universities nationwide, including Brown University, Boston College, Boston University, CUNY-Macaulay Honors College, the University College of Dublin, Rensselaer Polytechnic Institute, Rochester Institute of Technology and University of Richmond, to name a few. 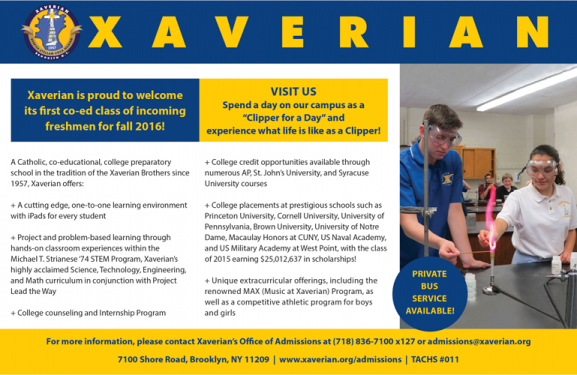