After spending the night in sleeping in the field, approximately 2.5 million pilgrims awoke to songs of praise in preparation for the World Youth Day (WYD) closing Mass with Pope Francis.

“It never ceases to surprise the joy that is present in everyone’s faces – even though there is the cultural barrier,” said Ryan Ignatius Vera, a pilgrim from St. Joan of Arc in Jackson Heights who has attended three WYDs.

The Gospel reading at the Closing Mass, when Jesus tells the tax collector Zacchaeus to get off the three and receive him in his home, touched Eduardo Palma from Presentation B.V.M., Jamaica. When he attended WYD Rio in 2013, he climbed a trashcan in order to see the pope pass by at Copacabana beach.

“The reading reminded me of what I did in Rio and that it does not matter how short you are, how small you think you are or if you think you are under everybody else because Jesus still loves you. God still loves me,” he said. “Don’t be afraid when he asks you to stay in your house even tough you are a sinner, even though we do bad things … Don’t be afraid to open your heart because he wants to stay in your house.”

Despite the sacrifices of the pilgrimage, the diocesan youth were open to be transformed.

“You can see a change in them in the mist of all of the frustrations and difficulties and the massive crowds, there is a change in spirit and is certainly a joyful spirit,” said Father Gerard Sauer, diocesan pilgrimage director.

He added that this transformation came from truly listening to the catechetical speakers and the pope’s message.

Internalized the Message of Mercy

“They have really taken the message of mercy into their own hearts to be able to be merciful toward themselves and be merciful with others,” he said.

Anahí Naranjo, 21, a pilgrim from St. Brigid Church, Bushwick, said she was shocked about how much she was learning about herself and her journey of faith.

“It’s crazy that it took me to come across the world to realize a lot of things, but I’m really thankful,” she said.

Ronald Jean-Jacques, 25, a pilgrim from SS. Joachim and Anne in Queens Village, liked the pope’s challenge to find what effect God can have in finding their personal goals, as opposed to what materialistic society asks you to pursue. 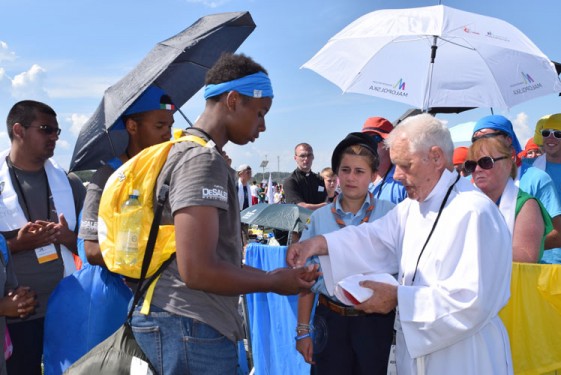 “We should pursue our dreams, and I love that he has been telling us how much we affect the world and me being a recent college graduate that gave me a lot of inspiration,” Jean-Jacques said. “I can go out there and do what I can to change the world and that I have a long time to make an impact.”

At the closing of WYD in Krakow, Pope Francis announced the site for the World Youth Day in 2019: Panama. In addition to talking about the possibilities of the new pilgrimage, the Brooklyn and Queens youth reflected on how they could share their experiences of mercy back home.

Vera said that after being transformed, the pilgrims can bring a lot of this faith-filled fire back home. After his first WYD in Madrid, he decided to serve his parish as a lector. He is now on the way to become a lay Dominican.

“Often times we think, ‘what is God calling me to do?’ and often God already has already call you,” he said. “There is this phrase ‘God doesn’t call the qualified, he qualifies the called.’ It does not matter where you are in the station of life is, God calls you to a certain vocation.”

McGeorge Jean-Baptiste, 19, from St. Therese of Avila, said that he was talking to his friends at World Youth Day about how as a young person who works and studies it can be easy to lose track of his faith.

“Coming here made me realize that even though I’m working toward my own success in the future I still need to give back,” he said. “I was telling them that God gives us unique gifts, so we are all placed in this earth for a reason, to benefit the earth.”