More than 600 young people from Diocese of Brooklyn and Queens are attending World Youth Day in Krakow, Poland, this week. Here are some of their stories:

Nadege Michel is a 21-year-old college student studying bioinformatics at New York City College of Technology. She aspires to be a doctor one day. But this week, her greatest aspiration is to see Pope Francis.

“Pope Francis, there’s just so much,” Michel said. “His energy that he brings with a simple smile or touch will bring you from a smile to tears because you can feel all of his spirit. Just by watching him on TV, makes you think, ‘I want to be right in front of him.’”

Michel is one of the senior altar servers from Holy Cross Church, Flatbush, attending World Youth Day for the first time with her pastor, Msgr. Joseph Malagreca.

After seeing parish youth return from World Youth Day in Rio, she and fellow altar server, Pearl Larnage, told monsignor they wanted to go to the next big youth event.

“Weeks later, we ended up having a conversation. And he’s like, ‘You’re going to Poland,’” Michel said. “We started yelling, screaming, we were so excited about going.

Michel has learned the hard way that anything can happen in life. Before she was eight years old, she underwent 27 surgeries to remove a growth in her mouth and neck.

“It changed me a lot,” she said. “My mother lost her job for me, taking care of me, and she never left my side at all, day and night.”

Witnessing her mother’s unwavering faith through difficult times helped strengthen her own beliefs and brought her closer to God.

“Sometimes we say why does this happen to me, or I wish this and that,” she said. “Like my mother always says in Creole, in English translates: Your plan, or blessing, will always come down the line. You just have to have patience for it.”

Michel feels this pilgrimage to Poland is a blessing in her life.

“This is a God-given opportunity where you get to actually connect and actually see why you’re alive,” she said.

For Pearl Larnage, 19, this pilgrimage is about finding “clarity and understanding” God’s will for her life.

“I want to go to Poland and say: ‘Ok God, take me where You want me to be. I am Your servant,” she said.

Those questions are an outgrowth of Larnage’s life in the Church. At Holy Cross, she’s received her sacraments, attended religious education and served on the altar for the last nine years. She goes to Mass each week with her mom. And like the young people she’s meeting this week, she wants to make a difference in the world.

“Each of us pilgrims come from a place where we deal with trauma in the world, whether it be poverty, whether it be natural disaster or hunger, and we each carry that story in our hearts …

“We’re just kids and we’re going through so much but we feel as though we want to do more, but we’re not God and we’re not super humans. …

“We’re all going to go and share that with God and just be like ‘Help us and give us the tools that we can help, little by little.’”

Following Pope Francis’ suggestion to World Youth Day pilgrims to “prepare spiritually above all,” she’s been reading Scripture and going to regular confession.

Her journey has been made possible by her parents and parish family at Holy Cross. 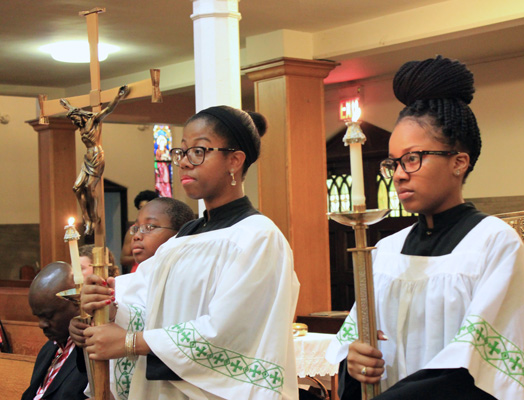 “Financing this trip has been by the grace of God, and the charity of the different members of this parish,” she said.

She doesn’t know all of her benefactors personally, but they’ve watched her grow up in the church. And she is carrying these “aunties and uncles” with her in spirit to Krakow. She wants them to know that she appreciates their sacrifices for her chance to grow according to God’s plan.

“Even though I’m as small as a mustard seed,” she said, “I can plant myself and grow as a flower and just help other people so that they can know God and love God as much as I have learned to love God.”

Peter Damour is a natural leader – and he uses his gifts for God and the Church.

Although he’s only 18, he is one of the most active parishioners at St. Clare’s Church, Rosedale. He is a sacristan, cantor and an extraordinary minister of the Eucharist, while also serving on the pastoral council and as president of the youth ministry.

“My life and mission in the church is to really minister to people,” he said. “And pass that torch on.”

Headed to the Borough of Manhattan Community College this fall, Damour aspires to be a high school teacher, and is passionate about guiding peers onto the right path.

“I want to teach young people to be more informed, to be more culturally responsible for things that go on in our world,” he said. “And to not be afraid to speak up.”

He’s ignited the flame of faith in peers at St. Clare’s and encouraged seven of them to join him at World Youth Day, with Father Andrew Struzzieri, pastor, and five adults serving as chaperones.

“People really listen to his suggestions,” Father Struzzieri said. “He’s really gathered our young people to get more interested in church, get engaged and involved.”

Having organized an international showcase at his high school and on the parish level, Damour, who is Haitian-American, has an appreciation for different cultures, ethnicities and languages, especially when they’re unified under the umbrella of the Catholic faith.

“We don’t often see, in my opinion, the cultural background that our church possesses,” he said. “The Church is universal and the Church is really all walks of life.”

Being in Poland has special significance for Damour: besides being the birthplace of his role model – Pope St. John Paul II, it was the homeland of a late friend and classmate who was of Polish descent.

“He really made me interested in Poland and its heritage, and the fact that I get to go … is just comforting to me,” he said.

What Damour is most anxious to experience on this journey is the Holy Father’s message for the world’s youth.

“I honestly think Pope Francis will challenge youth, including me, to live a life of sacredness,” he said. “I think the pope will also challenge us to take our rightful spot within the church. … So watch out pastors.”