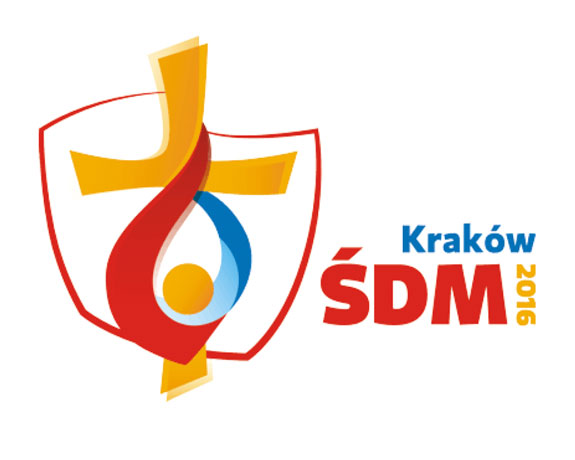 The Vatican released the information the same day, July 3.

The logo and prayer focus on the theme chosen by Pope Francis from the Gospel of Matthew: “Blessed are the merciful, for they will receive mercy.”

The logo, created by Monika Rybczynska, 28, with help from Emilia Pyza, 26, features a red and blue flame of Divine Mercy flowing from a gold cross that is surrounded by a red outline of the map of Poland. A gold dot represents the city of Krakow on the map and symbolizes the youth. The red, blue and yellow colors represent the official colors of Krakow and the city’s coat of arms.

The prayer begins with a line from St. John Paul II’s homily at the dedication of the Shrine of Divine Mercy in Krakow in 2002: “God merciful father, in your son, Jesus Christ, you have revealed your love and poured it out upon us in the Holy Spirit, the comforter, we entrust to you today the destiny of the world and of every man and woman.”

The first part of the prayer entrusts to the Lord’s mercy all of humanity, especially the world’s young people. The second part asks God to grant to the faithful the grace of being merciful toward others, especially those who have doubts about faith or who are discouraged. The last part asks for the intercession of Mary and St. John Paul – the patron saint of World Youth Day.

The Archdiocese of Krakow is the former see of St. John Paul and is home to the Divine Mercy shrine. St. John Paul had a great devotion to Divine Mercy, the recognition of God’s mercy as demonstrated in His sending His son to die for the sins of humanity.

Pope Francis has asked young people to read the Beatitudes in Matthew 5: 1-12, not just as a way to prepare for the 2015 diocesan celebration for World Youth Day and the international gathering with the pope in 2016 but also in order to make them a blueprint for their whole lives.

The international gathering is scheduled for July 26-31, 2016, with Pope Francis and youth from all over the world.

The last international celebration of World Youth Day, which Pope Francis celebrated in Rio de Janeiro in July, 2013, concluded with a Mass attended by 3 million people.