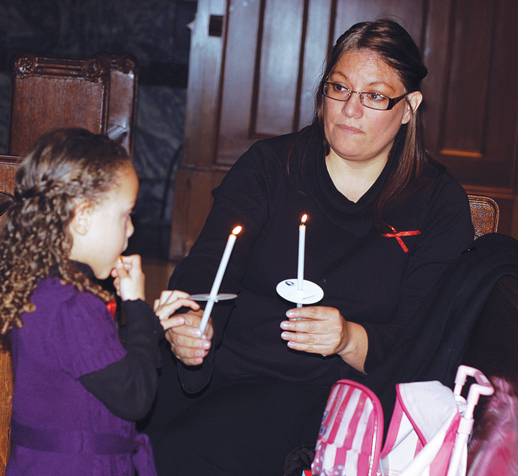 Thirty years ago, the Centers for Disease Control and Prevention reported the first cases of AIDS. The disease has since become a worldwide pandemic, claiming more than 33 million lives.

On World AIDS Day, Dec. 1, remembrances of victims were held across the globe and in the Diocese of Brooklyn, where several parishes commemorated the day.

For the first time this year, the evening service was organized in collaboration with two other parishes, St. Francis Xavier, Park Slope, and Immaculate Heart of Mary (IHM), Windsor Terrace.

This year’s theme was “Getting to Zero” to reflect the hope – and belief – that through treatment, education and interventions targeting mothers and children, the infection rate will drop to zero.

“We come in many cases knowing someone as a friend or loving someone as family who has died of AIDS,” Father Thomas Ahern, pastor, said as he welcomed the congregation – families and individuals – to the solemn observance. Each wore a red ribbon, an international symbol of AIDS awareness, which was provided to parishioners and neighbors as they arrived.

Recalling an international conference on AIDS held years ago at the Vatican, Father Ahern shared some thoughts about the words that appeared on one banner: “The body of Christ has AIDS.”

That message, he said, caused people to realize that when even one person is infected, every life is affected.

“If one member suffers, the whole body suffers,” he said, paraphrasing the words of St. Paul. Those with HIV/AIDS, he added, “bear the wounds of Christ.”

To address the disease in today’s world, he explained, the challenge is to replace silence and denial with acknowledgement and compassion.

Tietz spoke about the “extraordinary commitment” needed on the part of governments and individuals to address discrimination/stigma, increase testing, and ensure affordable, accessible and ongoing treatment. These steps, he said, are key to preventing the virus’ spread.

Another key is “having events like this,” Heller told the congregation. “Just being here is doing something.”

Like many in attendance, Heller said, “I remember what it was like not knowing what AIDS was.”
He lost many friends and co-workers in the early years and spoke about how Zimbabwe lost a whole generation to the disease.

Though antiretroviral therapies are helping those with HIV/AIDS live longer, he said, “we have to continue to speak about it,” especially among youth. Noting that a large percentage of homeless youth are lesbian, gay, bisexual and transgender, Heller said, “We have to show we care.”

Theresa Noll from IHM’s new Rainbow Ministry offered a reflection on what getting to zero means and Vaughan performed the David Friedman song, “Help Is On The Way.”

White candles were then distributed and slowly illuminated by Kevin Cooper, who helped organize the service, and others who passed the flame from their own candles.

Once every candle was lit, the names of over 100 victims of the deadly disease were read aloud.
These names also appeared on large red ribbons affixed to the wrought iron fence outside the church as part of an annual Memorial Ribbon Project, conducted by the parish’s Gay Lesbian Bisexual Transgender Straight (GLBTS) Ministry.

In the weeks leading up to the observance, names are added to the fence to raise community awareness about AIDS and the prayer service.

After a moment of silence, attendees blew out the candles while meditating on a rendition of Mendelssohn’s “O Rest in the Lord.”

Dr. Susan Draper attended the service for the first time with her husband, Michael Bianco, both St. Francis Xavier parishioners.

“We have very good friends who died of AIDS years ago so we felt compelled to come,” Draper said.

Their friends, Kevin Hanlon and Allen Weinstein, were among those remembered at the service. Hanlon, she noted, was a faithful Catholic.

“It was a very moving ceremony. I’m glad we came,” she said.