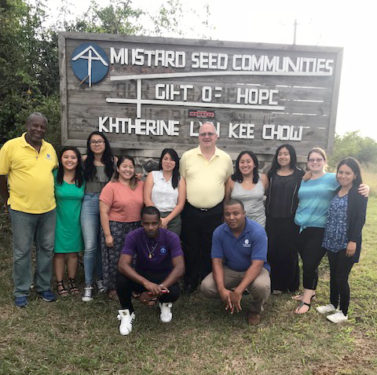 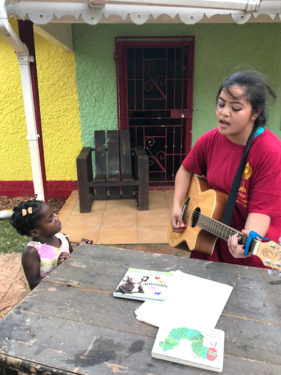 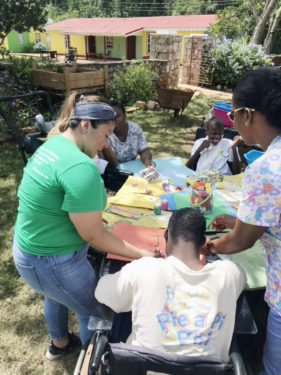 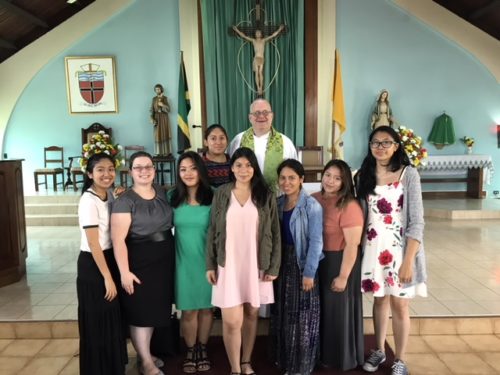 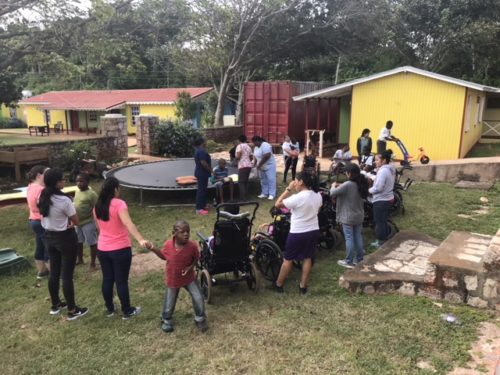 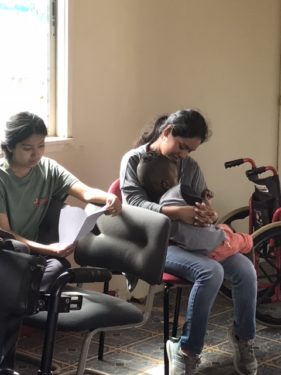 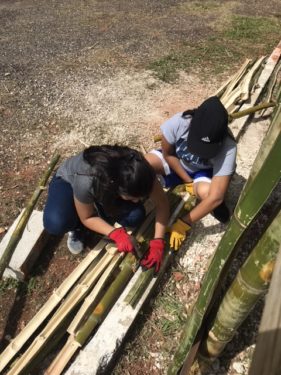 “Do we have to leave?” That was the question I was asked as we prepared to return to New York after a wonderful, grace-filled week on a mission trip with parishioners to the Mustard Seed Communities in Mandeville, Jamaica, this summer.

Our home for the week was Gift of Hope, a residence for people with a wide range of disabilities. The youngest was four and had cerebral palsy, and the oldest was 41, although he was only about three feet tall and not able to speak. The 20 residents, mostly children, are cared for by an amazing group of caregivers called “aunties,” who bathe, feed, clothe and care for them. Each resident is treated with respect and dignity, as we see Jesus in each of them.

Many residents have autism, cerebral palsy and encephalitis, among other medical issues. Most of them are not mobile and need to use wheelchairs pushed by caregivers to get them from place to place. All except one is non-verbal, but they each speak in different ways.

One girl who stole our hearts from the beginning was Joy. She was left on the street in a box a while ago, and the staff is really not sure of her age. She is severely disabled, not able to use her legs, her arms and hands are not fully functional, but she has a strong grip and a remarkable smile and laugh. Joy grabbed my hands as we were introduced and she just laughed and laughed.

For the whole week, our mission team served with joy and enthusiasm as we shared our love for Jesus with residents and staff. For our work project, we were asked to build a fence for a meditation garden for the residents. We dug holes and cut bamboo poles for the fence. We had to split the poles in three-person teams – one person using a machete while another held the pole and a third used a wooden block to move the machete, from top to bottom. After the poles were split, they were nailed to support beams. The project took two full days, but the thrill of accomplishment was palpable as we saw our work bear fruit.

In the late afternoon, we joined the children for recreation and the aunties asked one of our young people, Alexa, if she could play her guitar. She sang a few songs for the children and the rest of us did hand gestures or sang along. We then went back to our dormitory for dinner, prayed together and shared what had happened during the day.

As part of our ministry there, we also had the opportunity to escort residents in their wheelchairs to the dining facility where most of us spoon-fed them their meals. Some were able to chew solid food, while others had mixtures of porridge or a blended meal of rice and beans with some meat. I fed an older girl named Nekeisha, who seemed to enjoy my company. She would not keep her head straight but kept leaning in toward me.

In the morning after breakfast, we would bring the children to the therapy garden for “circle time” where aunties would sing with them and do basic lessons like, “What day is it? What is the weather like?” On the first day they even asked me to read to the children.

Sunday was a relaxing day – we went to Mass at the local cathedral and then played with and interacted with many of the children. In the afternoon, we had an ice cream party for the children and the staff where we served ice cream in cups and cones. It was fascinating to see how much they enjoyed the treat.

Praying with the residents and staff was among the many highlights. The property has a beautiful little chapel where the Blessed Sacrament is present. Each day the children are brought over to pray before our Lord, and I am sure that they speak with Him and He with them.

I celebrated Mass on “Thank You Tuesday,” and took the opportunity to thank the staff for their hard work, my team for their enthusiasm and the residents for the joy that they bring. On First Friday, I led adoration and we sang songs before our Eucharistic Lord. There was complete silence for a while, and then spontaneously, all of the residents broke out into a song of praise – understood only by the Lord, but it was so beautiful.

On our last day, we threw a party for all of the residents. We brought beach balls, crazy sunglasses, cake and ice cream. The interaction during this festive time brought smiles to all who were there.

I was so blessed to have served with an amazing team of eight young women from my parish – Alexa, Alexandra, Ashley, Brittany, Dalia, Martha, Stephanie and Tatiana. They gave all that they had and held nothing back. They represented Christ to the residents and to me.

Throughout our visit, we were ever cognizant of Jesus’ teaching from Matthew 25:40: “Truly, I say to you, as you did it to one of the least of these my brethren, you did it to me.”

It was truly Gospel joy to serve these little ones of the Lord.