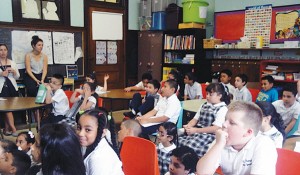 Whoever heard of a first grader from Queens going to Ann Arbor, Michigan for a field trip entitled “Walking the Food Chain”? How about a third grader going to Alaska? How about asking a fifth grader to explain what it felt like to do chemistry experiments in Australia?

The students of St. Thomas the Apostle Catholic Academy, Woodhaven, have done just that. Through a program entitled FieldTripZoom, the first through fifth graders have participated in three exciting field trips to faraway places including the Ann Arbor Museum, the Alaska Sea Life Center, and Seven Hills, New South Wales, Australia. These trips were possible through the use of a SMARTBoard and webcam.

At each location, students were introduced to their tour guide, toured various locations at each facility, and participated in demonstrations and lessons presented at the various facilities.

Two of these field trips were made possible via Catholic Telemedia Network (CTN), a subsidiary of DeSales Media Group.

“CTN was looking for a way to introduce teachers to distance learning opportunities,” said Gina Krainchich, director of CTN. “We knew that once given the technical support and funding needed to initiate the lesson, teachers would see how easy the process is.

“FieldTripZoom was selected because of how it streamlines implementation to a simple four-step process.”

Eleven schools were offered the grant, based on their usage of CTN’s digital learning services.

“The goal was two-fold,” Krainchich added, “to get teachers confident about using a resource that will expand students’ experiences beyond the classroom and to expose students to a way of learning that will likely be universal by the time they enter into higher education.”

In Seven Hills, Australia, students participated in chemistry experiments to demonstrate the difference between chemical and physical changes.

“I loved the trip because the guy told us that if you put particles together or spread out, it’s still the same,” said fifth grader Fardeen Salla. “I learned that in Australia the dates are different. For example, here it’s June 17, 2015, but in Australia it’s June 18, 2015.”

After participating in a trip to the Alaska Sea Life Center, second grader, Karen Paniagua, wrote, “When we went to Alaska, I learned that sea otters have adaptations to help them to survive.”

Eggers remarked that “the funniest part was when the student told their parents where they were going on their field trip, their parents didn’t believe them!”

Second- and third-grade students were able to make a clay sea otter with the help of their tour guide, Darin, after touring the Alaska Sea Life Center in Seward, Alaska, and learning about adaptations. “This is like visiting the gift shop,” a third grader said.

No matter what their age, students agreed that Virtual Field Trips are almost as much fun as being there and they don’t have to keep asking “Are we there yet?”