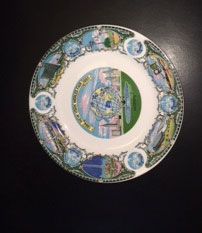 We conclude our coverage of the 50th anniversary of the New York World’s Fair by announcing the winners of our memorabilia giveaway. We gathered all the names of our readers who sent us their memories of the Fair and randomly selected the winners of the 13 items we had collected.

My favorite item was a commemorative plate depicting the Unisphere in the middle, surrounded by renditions of pavilions that included General Motors, Bell Telephone, Eastman Kodak, the Swiss Sky Ride and others. The lucky winner was Sister Mary Ita O’Donnell of Bay Ridge who sent us a clipping from The Long Island Catholic showing her escorting her students from Our Lady of Sorrows School, Corona, past the Unisphere on their way to the Vatican Pavilion.

Barbara Strauch of Maspeth won a plastic reproduction of the Pieta that was on sale at the Vatican Pavilion gift shop. Across the bottom of the figurine are the words: Vatican Pavilion New York World’s Fair, 1964-65. A real keepsake.

Our high school classmate from Cathedral Prep, Dick Beyrer, is the recipient of a sheet of U.S. postage stamps commemorating the World’s Fair. Dick had his best summer job ever as a Swiss Guard at the Vatican Pavilion.

We also gave away five First Day of Issue envelopes from the Vatican Post Office. Each is postmarked Vatican Pavilion, New York World’s Fair and bears either a Vatican stamp with the Pieta on it or the image of Pope Paul VI. The winners were Ellen Covas, Joseph Lehman, Carol Evancho, Nancy Motto and Joan James.

Gail Harvey, assistant principal of St. Saviour’s Catholic Academy, Park Slope, and Bill McCormack of Our Lady of Angels parish, Bay Ridge, will receive a vintage 1964 New York World’s Fair Film Library DVD. The video offers a trip back to the 1960s and shows how the Unisphere was built as well as offers an aerial view of the Fair. It also offers an “experience” of all the rides and booths in the amusement area that was located on the other side of the Long Island Expressway.

Michael Glus of Astoria, who already has an extensive collection of souvenirs from the Fair, is the winner of an official souvenir book from 1965, the second year of the Fair. It contains colorful night and day pictures of the Unisphere as well as some of the more popular buildings and statues.

Finally, we had two copies of the official guide book to the Vatican Pavilion, which are being mailed out to Mathew Schiller, the business manager of Catholic New York, the archdiocesan newspaper, and Maryann Hamcke of Howard Beach.

So, our journey down memory lane 50 years after the most spectacular World’s Fair is now complete. We will never again see the likes of that spectacle. We’re appreciative of all the help that our readers have lent to this effort, and our gifts are a simple way of saying thanks to you.

One thought on “Winners of World’s Fair Memorabilia Giveaway”