Father John Okeke has spent 18 summers serving parishes in the U.S., the last 10 in the Diocese of Brooklyn. In his native Archdiocese of Onitsha, Nigeria, he is a pastor, but when he comes to New York in July and August, he gets a break from his day-to-day responsibilities.

He still celebrates Mass, hears confessions and serves the people of God, but also has valuable time for reflection, refreshment and renewal.

“International training” is how he described his summer ministry at an orientation day for visiting priests who are serving in the Brooklyn Diocese this summer.

“When we come here, we learn things and we add them to what we already know. It helps us to improve in our parishes at home,” said Father Okeke, who is helping at St. Margaret parish in Middle Village.

A total of 83 international priests will be ministering in local parishes this month and next, said Deacon Julio C. Barreneche, diocesan secretary for clergy personnel. Most come from Nigeria (31), Ghana (22) and India (20), while the rest are natives of the Philippines, Poland, Colombia, Haiti, Congo, Mexico, Romania and Uganda.

International priests met at the chancery office in Park Slope in early July to learn more about life in the diocese and country, review guidelines for visas and attend Virtus training, while also sharing their experiences and fellowship.

The day began and closed with prayer, and the highlight was a midday Mass celebrated by Bishop Nicholas DiMarzio, who thanked the priests for the gift of their service. At a luncheon that followed, he greeted them personally.

“The real reason we have this meeting is to make sure you realize that Bishop DiMarzio treats – and wants every priest to be treated – like a brother,” said Msgr. Ronald Marino, former vicar for migrant and ethnic apostolates, as he opened the first information session.

He explained to his brother priests that while the diocese is home to people from various countries and continents, the priests serving here may not be from the same far off places.

“No matter how much I try,” he said, “I cannot be Nigerian, I cannot be from Ghana, I cannot speak Malayalam. We can’t be you. …You are a gift of the Holy Spirit to the Diocese of Brooklyn.”

It is a blessing, he explained, for people to see priests from their native lands, to hear their language spoken by countrymen and have that experience of home.

Another blessing is the ability for both priests and parishioners to encounter others from various cultures and backgrounds. That is what attracted Carmelite of Mary Immaculate Fathers Joshy Vazhappilly and James Varghese to the diocese.

“The people are from all different countries,” said Father Varghese, assisting for third year at B.V.M. Help of Christians, Woodside, where he has met natives of India, as well as people with roots in the Philippines, Ireland and Germany.

“I love the parish and the pastor all the more. It’s like a homecoming for me,” he said.

Since social norms vary from place to place, Msgr. Marino reviewed cultural and practical advice for life and ministry in the U.S. Topics ranged from rectory etiquette and length of homilies to safeguarding Social Security and bank account numbers.

An interesting tidbit some priests might have been surprised to learn is that they cannot officiate at weddings.

“Keep in mind that you should not be doing weddings in the Diocese of Brooklyn and Queens unless you are registered with the City of New York to perform marriages,” Msgr. Marino said.

While most priests at the orientation previously served in the diocese and know what to expect, they all listened intently when Father Patrick Keating, Esq., CEO of Catholic Migration Services, began to discuss 194 forms, R1 visas and taxes.

In recent years, the government has become stricter about paperwork, Father Keating said, but he assured his brother priests that it is “all manageable” as long as they cooperate with the diocese and follow proper procedures.

Father Keating also announced that the bishop recently issued a manual for visiting and non-incardinated priests that outlines protocols for ministry in the diocese, and provides guidance on taxes and visas.

Father Charles Oppong, a priest of the Diocese of Sekondi-Takoradi in Obuasi, Ghana, was grateful for the session.

“I like Brooklyn. Everything is well structured and organized,” he said. “To have a bishop who meets us, welcomes us, serves Mass for us, it’s good. We feel at home.”

And he has experienced that kindness from the top down to his pastor, Father Richard Ahlemeyer, and the people of St. Camillus, Rockaway Beach.

“My pastor is a nice man, very open and good. He allows me to cook and when he smells Ghanian food, he compliments me. He makes me feel at home and part of the community.” 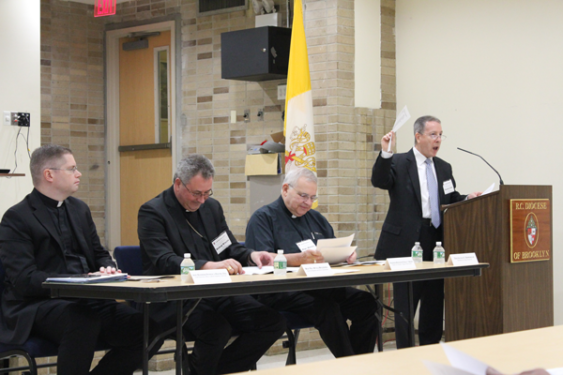 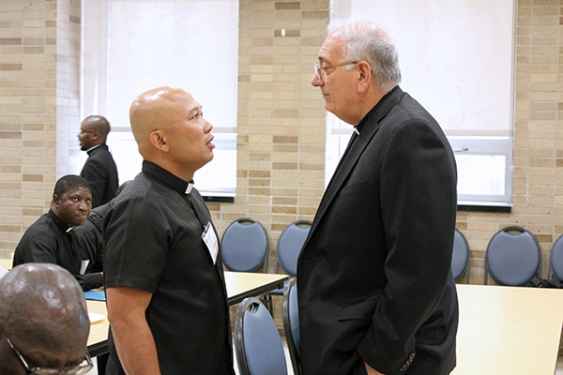 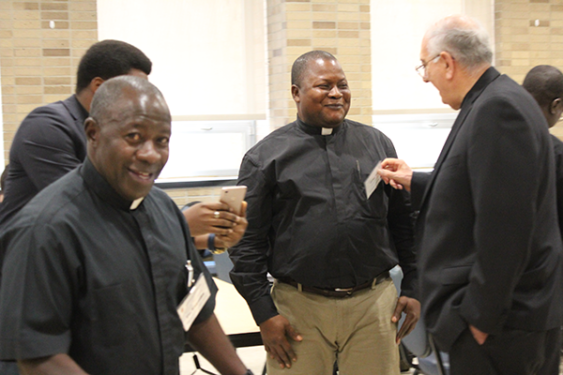 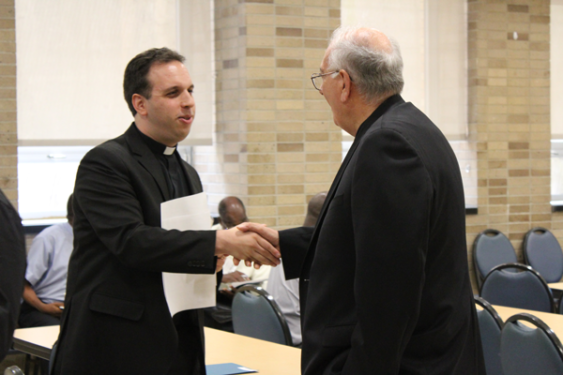 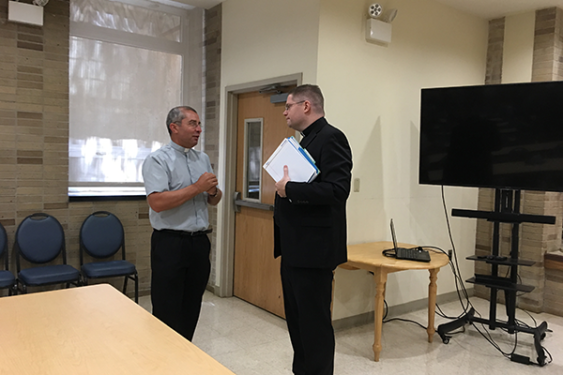 One thought on “Visiting Priests Come to Assist Diocesan Parishes”