A suspect was arrested Saturday, Feb. 24, in connection with incidents of vandalism on the property of American Martyrs Church, Bayside.

Surveillance cameras outside the Queens church captured images of a man vandalizing two religious statues on Friday, Feb. 23, at about 6:10 in the evening.

A Blessed Mother statue was dragged 25 feet from its base and smashed. The shell around a statue of the Sacred Heart of Jesus was thrown down a flight of steps.

NYPD officers were called to the scene to investigate the incident as a hate crime.

This is not the first time American Martyrs Church, located at 79-43 Bell Blvd., off Union Tpke., has been targeted by vandals. In December, someone bent back the fingers of a statue of St. Isaac Jogues in the church’s prayer garden. In October, damage to a Bingo sign was discovered. In August, a man threw a brick through the windows of the church doors. That crime was also caught on camera and police arrested the alleged vandal. 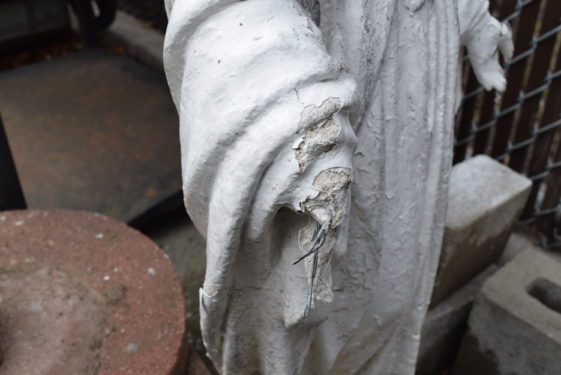 American Martyrs parish recently installed an upgraded surveillance security system two weeks ago, but the corner of the rectory wall, where the statues were located, has poor visibility on the camera as well as high fences so the perpetrator could not be made out clearly at the time.

Father Frank Schwarz, pastor, is concerned for the safety of his parishioners and the continuation of vandalism to parish property.

“This is very disturbing especially since this happens at the frequency it has been happening at,” said Father Schwarz. “We have had a number of incidents here over the years and it causes people to be concerned. We seem to be the target as this is not happening often around the neighborhood as far as I am aware.

According to the pastor, the Sacred Heart statue was thrown down a flight of stairs and through the door at the bottom of the stairs, just a few minutes after a group of children from kindergarten to second grade were coming out of that door.

“So fortunately they had just left in time otherwise this could have been even worse,” said Father Schwarz.