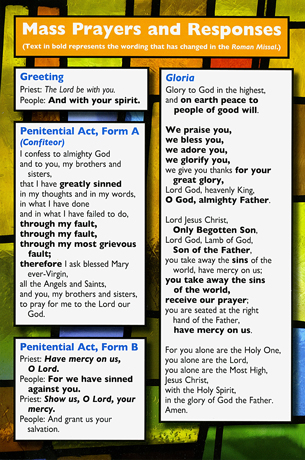 On the First Sunday of Advent, we will notice changes in the Mass text which come from the revision of the Roman Missal. The Roman Missal was first revised in 1970 which was the first English translation of the 1962 Latin Missal. Since that time, the 1985 revision was undertaken with little notice because there were no major changes. And now in 2011, some noticeable changes based on the translation of the Latin text on which the Roman Missal is derived will be used beginning on Nov. 27, the First Sunday of Advent.

I must emphasize, however, that changes in the Missal have occurred over time, some of which have gone unnoticed. The major change is occurring this time since the Holy See has revisited the entire process of translations and has adopted new principles for translation. There is an old Italian saying which states, “All translators are traitors… Tradutori sono traditori.”

How true it is that when one accurately translates from one language to another there are always accommodations which could be better. At this time, however, the Holy See has asked each Episcopal Conference to undertake a revision of the original translations in order to be more accurate in our prayer.

The old principle was called dynamic equivalency, which is the principle of translation which is widely used, but does not always make for accuracy. Dynamic equivalency would mean that whatever is translated confers the original meaning but is not exactly a word-for-word translation. There are certain good examples where changes will be made.

One example especially is at the beginning of the third Eucharistic Prayer when the priest formerly said, “From east to west.” With the new translation, the priest will now say, “From the rising to the setting of the sun,” which is the literal translation of the Latin text.

Another change that can lead to misunderstanding are the words of institution themselves which have been retranslated. The priest in the words of institution says, “Now for all.” Those words will be changed to “For many” which is the more accurate translation of “pro multis.” This is the wording used in the Biblical narrative account of the Last Supper found in the Gospels of Matthew and Mark. Some have said that we are now changing our theology, that Christ did not die for all, but just for many. There is no change in the theology, but just a change in the wording since the Church does teach that Christ died on the cross for all men and women.

The expression “for many,” while remaining open to inclusion of each individual human person, is reflective also of the fact that this salvation is not brought about in some mechanistic way without one’s willing participation. Rather, the believer is invited to accept in faith a gift that is being offered and to receive the supernatural life that is being given to those who participate in this mystery, living it out in their lives as well as to be numbered among the many to whom the text refers.

Finally, another change is in the Creed. Previously, we said “We believe.” Now we will say, “I believe.” This again is a closer translation of “Credo.”

Why was there a need for a retranslation? This is a question that many will ask. As has been said, the Church continually revises its texts and prayers in order to be most accurate. This has occurred many times in history, but now especially because the vernacular or native language of the people is being used in the translation.

The Mass prayers, the introductory prayers, the prayer over the gifts and the prayer after Communion have all been retranslated not only with greater accuracy, but also with greater reflection of the Latin text which many times has long sentences with subordinate clauses. This will be a challenge for the celebrant to interpret how these prayers can be prayed.

I, myself, have been practicing the newly translated Eucharistic Prayers, as I had committed the old prayer to memory after the more than 40 years of celebrating the Eucharist. Now that memory needs be erased and a new memorization will take its place. It is always good to be able to face the people and proclaim the Eucharistic Prayer from memory.  I am not sure I will be able to do this again for some time into the future.

Changes in the way we pray are necessary. These changes also bring challenges. None of us like change, but the necessity of change at times challenges us. The Church, with its newest translation of the Roman Missal, is putting out into the deep. These changes may leave some people confused and wondering what has happened.
I am sure, however, that if we commit to prayer in union with the Universal Church, we will eventually come to a better understanding of how and what we pray for in the beautiful words of the celebration of the Eucharist.