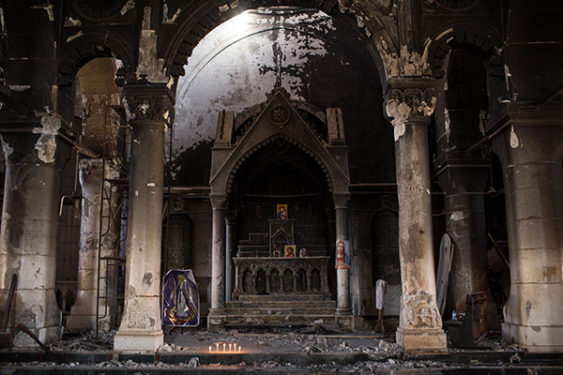 The burnt and destroyed interior of the St Mary al-Tahira church is seen on November 8, 2016 in Qaraqosh, Iraq. (Photos: Chris McGrath/Getty Images) 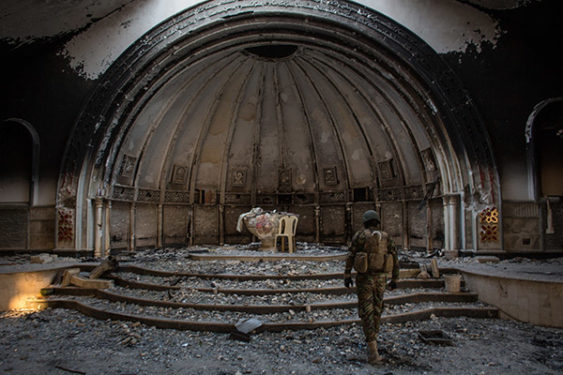 A fighter from the NPU (Nineveh Plain Protection Units) waks through a destroyed church on November 8, 2016 in Qaraqosh, Iraq. 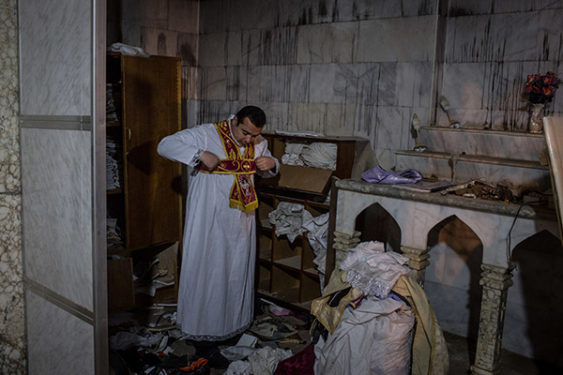 A Deacon stands amongst rubble in a destroyed part of the church after taking part in the Christmas mass at the Mar Shimoni Church on December 24, 2016 in Bartella, Iraq. 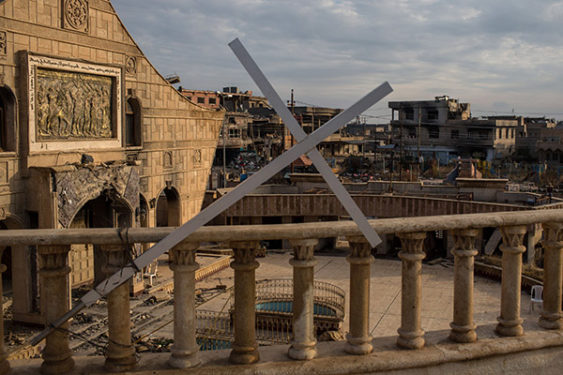 A cross hangs from the roof of a church burned and destroyed by ISIL during their occupation of the predominantly Christian town of Qaraqosh on December 27, 2016 in Qaraqosh, Iraq. 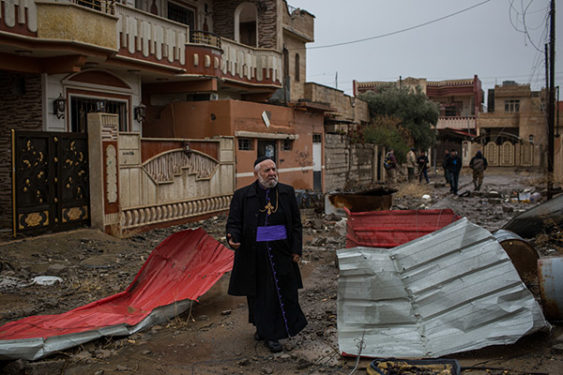 Pastor Saher Quraikos Hanna views a destroyed street near his home in Bartella before taking part in the Christmas mass at the Mar Shimoni Church on December 24, 2016 in Bartella, Iraq. 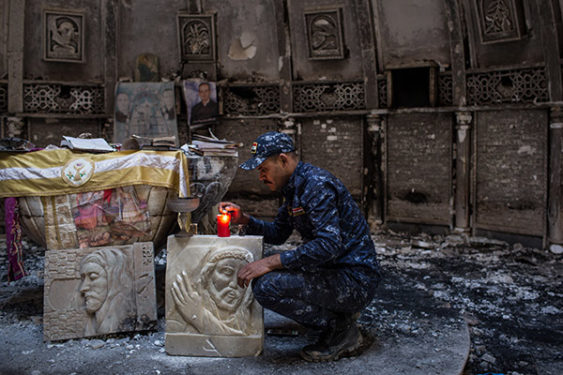 A member of the Iraqi federal police lights a candle inside a church burned and destroyed by ISIL during their occupation of the predominantly Christian town of Qaraqosh on December 27, 2016 in Qaraqosh, Iraq.

By Engy Magdy, Special to The Tablet

The final straw that prompted the U.N. to formulate its “United Nations Plan of Action to Safeguard Religious Sites” was the mass murder earlier this year at two mosques in Christchurch, New Zealand.

The plan was developed in conjunction with the U.N.’s “Strategy and Plan of Action on Hate Speech” to address the root causes of violence. Specifically, the U.N. in a statement said that during times of war religious sites will be “protected by international humanitarian law” and said that attacks against the sites will be deemed war crimes.

Also, at the U.N. last month, President Trump spoke decrying the lack of religious liberty around the world. He said the United States will spend an additional $25 million to protect religious freedom and sites, as well as relics, worldwide.

A scan across the world shows the violence many religious people, and in particular Christians, face. The violence ranges from widespread, systemic oppression in some countries to isolated,

but still horrific, incidents in others.

Coptic Christians have been targeted since the 1970s, but have been facing unprecedented attacks since the 2011 Arab Spring uprising. The election of the Muslim Brotherhood in 2012 brought even more violence.

In July and August 2013, Muslim Brotherhood followers burned down and vandalized more than 40 churches in Egypt and attacked dozens of Christian institutions and schools, as well as Coptic-owned business and homes, according to Human Rights Watch.

Since 2016, Coptic Christians have had to deal with a wave of terror attacks.

The violence ISIS committed against Christians and Yazidis, another religious minority, was recognized by the U.S., the European Union and the U.K. as a genocide. The terrorist group razed more than 100 churches and monasteries in Iraq, including some that dated back to the sixth century.

House and underground churches traditionally face the brunt of persecution, but under President Xi Jinping, state-sanctioned churches have been targeted as well. Repression of Christians includes harassing and detaining believers, blocking entry to sites of worship, interrupting gatherings, dismantling crosses, demolishing churches and disbanding congregations, according to the Council on Foreign Relations.

Last October, 11 worshipers were killed and two congregants wounded when a gunman opened fire at the Tree of Life Synagogue in Pittsburgh.

In March, an armed man shot worshipers in two mosques in Christchurch, killing 49.

On Easter Sunday in April, more than 250 were killed when three churches in Sri Lanka and three luxury hotels in the capital city of Colombo were targeted in a series of coordinated terrorist suicide bombings.