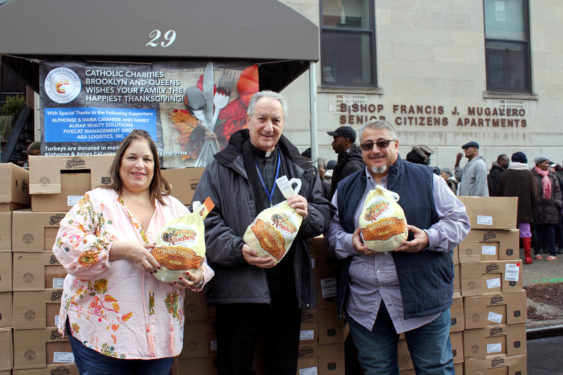 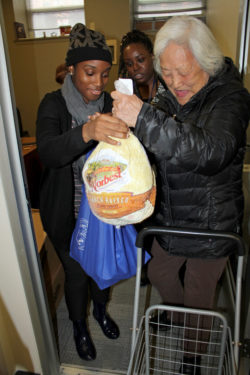 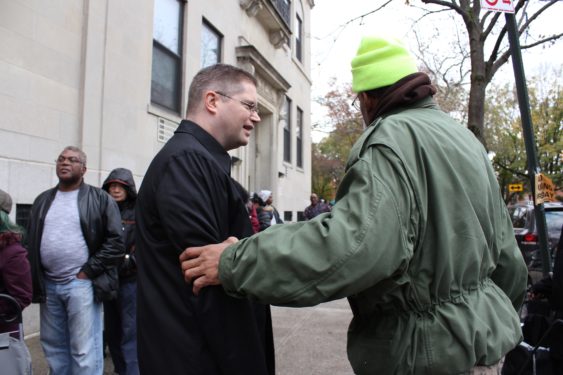 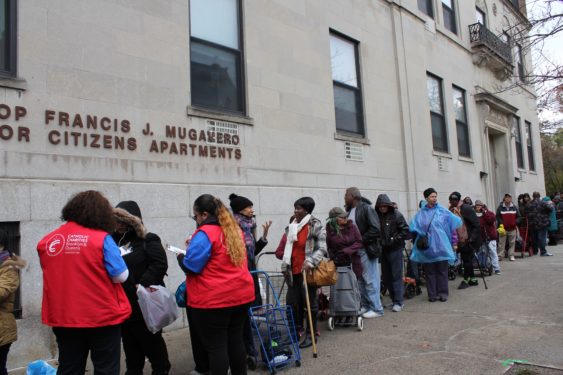 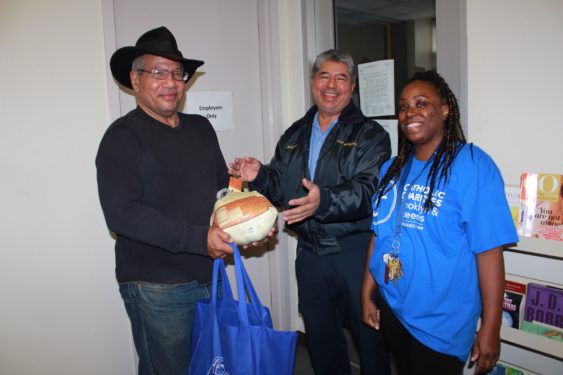 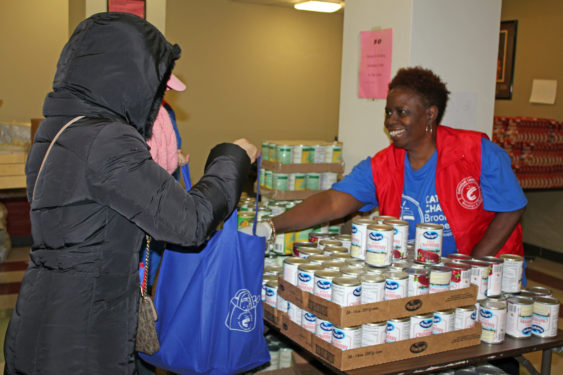 Close to 1,000 local residents and families struggling to make ends meet were able to sit down to a traditional turkey dinner with all the trimmings this Thanksgiving, thanks to Catholic Charities.

A week earlier, their need was obvious as they stood on wraparound lines – some for hours before the sun had even risen – in anticipation of Charities Brooklyn and Queens’ annual distribution of Thanksgiving meals.

In all, 950 turkeys and hundreds of pounds of fresh produce and dry mixes were given out over two days at Catholic Charities’ Bishop Mugavero Senior Apartments in Fort Greene, and Catholic Charities Queens HUB in Astoria.

“This is a blessing,” said a local resident in Fort Greene, who was at the Brooklyn site with her young granddaughter. It was her third year receiving a Thanksgiving meal.

“There’s a lot of people who are not fortunate enough to have food for Thanksgiving, and Catholic Charities is out here every year to help,” she said.

Alphonse and Maria Catanese of Almar Realty Solutions donated 700 turkeys to the effort in memory of their parents, Alphonse and Agnes Catanese and John and Betty Ingrassia.

It is the second year the Catanese family, parishioners of St. Francis de Sales, Belle Harbor, have partnered with Catholic Charities to give out turkeys – a practice Al learned from his father, who used to give turkeys to his employees and associates every year.

When he asked why, his father told him that it made the holiday “a little more special” – for the person doing the giving as well as the receiving.

At the Fort Greene apartments, building residents and community members each received a 12- to 14-pound turkey and a blue tote bag to use as they “shopped” for side dish items in the building’s lobby. Options included fresh fruit and vegetables, canned corn and cranberry sauce, instant stuffing, gravy and muffin mix.

At every station, shoppers encountered volunteers who wished them a “Happy Thanksgiving” as they picked and chose what they wanted. Volunteers came from St. Therese of Lisieux parish, East Flatbush, AHRC and The Advance Group.

When it was his turn, Tyrone Fisher collected his turkey and stuffing mix, and made sure to pick up some sweet potatoes, which he planned to turn into a pie.

He was mindful not to take more than he needed, realizing there were others waiting in line outside.

“A lot of people don’t get to have Thanksgiving,” said Fisher, who resides in the Mugavero apartments. “I hope everyone here will have a good time.”

His fellow resident, Kenneth Dillard, was delighted to receive a turkey and sides that he could share with his sister, who helped him move into the apartment building earlier this year.

First, he noted the generosity of both the donors and volunteers to this effort, and secondly, he acknowledged the level of dignity and respect with which every individual was treated.

“You see people coming here and living out the Gospel message,” he said. “At Catholic Charities, we’re able to facilitate some of this. It’s a team effort.”

Carla Forbes of St. Therese of Lisieux parish was proud to be part of that team. An office manager for a law firm, she took the day off from work to volunteer.

When she signed up, she wasn’t sure what the turnout would be and could not believe the line of people waiting when she arrived around 8 a.m.

“You presume that someone doesn’t need something because you see them nicely dressed, nicely clothed, and you’re thinking, ‘Oh, that person doesn’t need anything,’ but they do.

“Need knows no boundaries, no social criteria, it just keeps on,” she said.

As people finished filling their bags, many exited the building looking as though they had fewer worries than when they entered. They seemed to have a renewed sense of dignity carrying the food that would feed their families on the coming holiday.

“It means a whole lot,” one woman said quietly. “Money is so tight these days – so any help, you really appreciate it.”

After receiving his turkey and fixings, a community resident named Mark spotted Father Keating walking down the block, and took a moment to shake his hand.

“They represent the community in its fullness,” Mark said of Catholic Charities. “They are part of the neighborhood for many years, and they have served us.”