Parishioners at St. Nicholas of Tolentine, Jamaica, now have a new way to honor their patron saint.

This past fall, Father John Francis, pastor, visited Tolentino, Italy, and brought back a first class relic of St. Nicholas of Tolentine.

On Saturday, Feb. 25, parishioners remained after the 5 p.m. Mass for a special prayer service when they were able to venerate the relic of St. Nicholas. During the service, Father Francis recounted how he was able to obtain the relic when he visited the Basilica of St. Nicholas of Tolentine.

“Normally, it would take some time. I informed Father Francesco Menichett, the friar in charge of the process, that our parish was celebrating our 100th anniversary. I made the request and was told to wait for a reply. An hour later, they returned telling me that they will have a relic for me within an hour. He was so kind to process my request faster.”

The prayer service, coordinated by Father John Gribowich, highlighted St. Nicholas’ accomplishments. The first reading was from the life of St. Nicholas of Tolentine by Peter de Monte Rubiano. It told how St. Nicholas’ prayer “was pleasing to the Lord,” while “his acts of loving service were pleasing to his neighbor.” His charity towards others and his work with the poor is the example the parish follows today in many acts of charity, especially the homeless shelter and the food pantry. The Gospel reading selected was about the Beatitudes, a fitting tribute to the service and example of this saint.

“It was a beautiful evening, having the parishioners together for this special occasion,” said Father Gribowich. “With the relic, they are now able to have a more special connection to their patron.”

After the congregation prayed the Prayer to St. Nicholas of Tolentine, Father Francis blessed the people and then there was individual veneration of the relic. All those in attendance came up to kiss the relic, presented to them by Father Gribowich, and pay their respects.

In the spring, children of St. Nicholas of Tolentine Catholic Academy will have a chance to venerate the relic. For those parishioners who were unable to attend this event, and those from around the diocese who would like to venerate the relic, there will be another blessing in the future. Follow the parish website, http://stnicholas-queens.org/ or the 100th anniversary site. 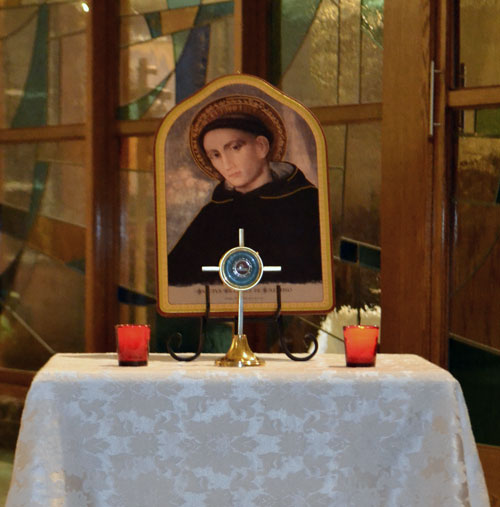