Pope John Paul II accepted the resignation of Bishop Thomas V. Daily and appointed Bishop Nicholas A. DiMarzio of Camden, N.J., to succeed him as the seventh Bishop of the Diocese of Brooklyn on Aug. 1, 2003.

Embracing the theme, “Put out into the deep,” Bishop DiMarzio has gone out into the depths of the diocese over the last decade, serving the flock with vision, energy, wisdom and love. He has guided and challenged the local Church, developed new methods and reshaped goals and objectives to preserve diocesan parishes and schools while advancing the New Evangelization.

A timeline of Bishop DiMarzio’s ministry and contributions to the life of the Church in Brooklyn and Queens follows. 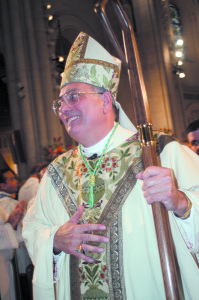 Oct. 3 – Installed as Bishop of Brooklyn at Our Lady of Perpetual Help Basilica, Sunset Park, at right.

Oct. 18 – Writes first “Put Out Into the Deep” column for The Tablet, titled You Will Be Fishers of Men.

Oct. 18 – Participates for the first time in a pro-life vigil conducted by the Helpers of God’s Precious Infants at St. Michael’s Church, Sunset Park.

Nov. 6 – Celebrates the end of Ramadan with Islamic leaders in Sunset Park.

Nov. 13 – Elected Chairman of the USCCB’s Committee on Domestic Policy.

Nov. 21 – Meets with Pope John Paul II in Rome while attending the meeting of the Pontifical Council for Pastoral Care of Migrants and Itinerant People.

Feb. 28 – Issues statement on sexual abuse in the Church, offering an apology and setting aside days of prayer and penance for the sins of sexual abuse.

April 19 – Addresses Knights of Columbus rally in Albany, N.Y., urging Catholics to speak up for their rights.

May 17-20 – Attends plenary session of the Pontifical Council for the Pastoral Care of Migrants and Itinerant People in Rome.

July 11 – Participates in the 117th annual Feast of Our Lady of Mount Carmel in Williamsburg, at right.

Sept. 18 – Announces strategic plan to increase vocations to the priesthood and religious life.

Oct. 3 – Marks first anniversary as Bishop of Brooklyn with his first pastoral letter, “The New Evangelization in Brooklyn and Queens.”

Oct. 3 – Makes first ad limina visit to the Vatican as Bishop of Brooklyn.

Oct. 20 – First Rosary Rally for school children throughout the diocese. 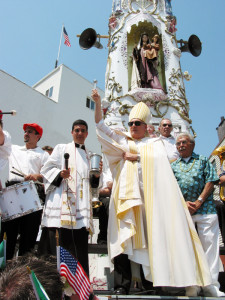 Oct. 11 – Presents four-day retreat on The Prayer Channel on the special Year of the Eucharist.

Oct. 15 – Issues second pastoral letter to the diocese, titled “The Family: the Hope of the New Evangelization.

Oct. 17-21 – Participates in a symposium on the Universal Call to Holiness for Priests for the priests of the Diocese of Brooklyn in Thornwood, N.Y.

April 15 – Prays with the youth of the Jornada Movement during their annual Holy Saturday Caminata.

May 6 – Honored by the Italian-American Museum in Manhattan.

May 15-17 – Meets Pope Benedict XVI while in Rome to attend a meeting of the Pontifical Council for the Pastoral Council of Migrants.

May 19 – Ordains 36 permanent deacons for the diocese.

June 3 – Leads the rosary at the diocese’s first Family Rosary Rally in Our Lady of Hope Field, Middle Village.

Oct. 18 – Issues third pastoral letter, titled “Do Not Be Afraid – A Pastoral Vision for the New Evangelization.”

Nov. 14 – Introduces “Form-ing Consciences for Faithful Citizenship: A Call to Political Responsibility from the Catholic Bishops of the United States” at general meeting of the U.S. Bishops in Baltimore.

Jan. 6 – Participates in the Three Kings Parade in Williamsburg..

Feb. 20 – Holds joint press conference at the Chancery with Sen. Charles Schumer to address the mortgage and foreclosure crisis’ affect on the diocese.

April 11 – Participates in The Tablet’s 100th anniversary dinner at the Brooklyn Marriott.

April 20 – Hosts departure ceremony for Pope Benedict at Kennedy Airport as he returns to Rome.

Oct. 25 – Diocesan pilgrimage to the National Shrine of the Immaculate Conception, Washington, D.C.

Jan. 29 – Speaks to the annual dinner of The Cathedral Club of Brooklyn, urging laypeople to take a more active role in politics and community affairs.

April 6 – Participates in the diocese’s “Reconciliation Monday” in all parishes.

Aug. 15 – Resumes weekly column in The Tablet following his surgery.

Jan. 13 – Asks parishes to respond to the earthquake victims in Haiti; sets up committee to organize diocesan response.

May 30 – Celebrates 40th anniversary of ordination Mass of thanksgiving at St. James Cathedral-Basilica

June 24 – Sends documentation to Rome to open the inquiry for the cause of canonization for former Brooklyn pastor, Msgr. Bernard Quinn

Nov. 1 – Suspends Mass obligation for All Saint’s day for those in evacuation path of Hurricane Irene

Nov. 10 – Announces plan to merge seminary system with Archdiocese of New York and the Diocese of Rockville Centre at press conference at the Immaculate Conception Seminary in Huntington, L.I.

Feb. 5 – Writes a letter to the diocese criticizing the provisions of ObamaCare health plan that would violate the conscience rights of Catholics

April 22 – Announces plans to petition the Vatican to name St. Joseph’s Church, Prospect Heights, as the Co-Cathedral of the diocese.

July 11 – Ordains Bishops Chappetto and Sanchez to the episcopacy.

March 3 – Announces that St. Joseph Church has been designated as the diocese’s Co-Cathedral.

May 22 – Meets Pope Francis for first time in Rome during the Plenary Meeting of the Pontifical Council for the Pastoral Care of Migrants and Itinerant People.

July 31 – Congratulates Brooklyn Auxiliary Bishop Frank Caggiano on his appointment as Ordinary of the Diocese of Bridgeport, Conn.