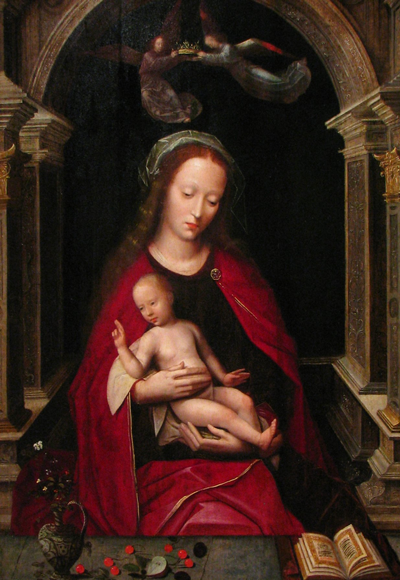 Mary is the true Star of Bethlehem or Christmas Star, because she is the one who leads us to Jesus. “Ad Jesus per Miriam’”(To Jesus through Mary).

Mary’s role is to bear Jesus to us and us to Jesus, and His role is to bear us to the Father, for He said, “I am the Way, the Truth and the Life. No one can come to the Father except through Me.” In other words Mary is the “way” to “the Way, the Truth and the Life.” Mary is not an addendum to our Catholic faith; she’s integral to our Catholic faith. You couldn’t have Jesus 2,000 years ago without her, and you can’t have Jesus today 2,000 years later without her. Just as there can be no birth without a mother, so there can be no Christmas without Mary. She is the Mother of Christmas.

Back in 1644, Christmas was attacked in England by the Puritans and the Calvinists who rejected Mary. They tried to ban Christmas, as she was necessarily and unavoidably central to every picture, thought and celebration of Christmas.

They managed to pass the ban by an act of Parliament under Oliver Cromwell, but it was soon abandoned. The Protestants were just as guilty as the innkeepers in Bethlehem who rejected Our Lady on that Holy Night 2,000 years ago when she sought lodging from them. By rejecting her, they ended up rejecting Jesus, because Jesus was in her very womb.

And so we believe that by accepting Mary into our lives, we accept Jesus into our lives, but if we end up rejecting Mary in our lives, we shall end up rejecting Jesus in our lives. That was emphasized by St. Louis de Montfort, when he said: “Those who love and devote themselves to Mary, it is a an infallible sign of predestination that they are going to go to Heaven, but those who refuse to love and devote themselves to her, it is an infallible sign of reprobation that they are not going to go to Heaven.”

All of Mary’s prerogatives are rooted in the fact that she is the Mother of God. O humble sublimity! O sublime humility. A woman while remaining a virgin became a mother, and more wondrous yet, a woman became the mother of her own creator.

On Earth, the Word had a Mother without a father as in heaven He had a Father without a mother. The Son of God who came eternally from the Substance of the Father came to us in time from the substance of Mary.

The greatest and best thing you can say about any woman is that she is a good mother. Nothing truer, nothing better, nothing more beautiful can be said about the Blessed Virgin Mary than she is the Blessed Mother of God. God was her little baby. She nursed Him and clothed Him just as mothers today do. She loved and cherished her little one. And we know that God would not become man until Mary first gave her consent to be His Mother.

An angel on that holiest of nights when Jesus was born said, “Behold, I proclaim to you good news of great joy that will be for all the people. For today in the city of David, a Savior has been born for you who is Christ and Lord.”

And so as you prepare to celebrate Christmas, acknowledge that there is no Christmas without Mary. No crib without the Virgin. No Christ without his Mother whom we call the Virgin Mary. She is the true Star of Bethlehem, the true Christmas Star. So have yourselves a very Mary Christmas!

Father Murphy is the coordinator for Marian devotions for the Diocese of Brooklyn.