After a stellar 40-year basketball coaching career for the current University of Miami, Coral Gables, Fla., head basketball coach, Jim Larranaga, it’s all coming back to where it started.

The Archbishop Molloy, Briarwood, graduate was inducted May 17 into the CHSAA Hall of Fame at the 27th annual CHSAA Golf Outing and Hall of Fame Dinner at the Brynwood Golf & Country Club in Armonk, N.Y.

Larranaga prepared an acceptance statement that his high school teammate John Carey and coach Jack Curran read at the dinner. He credits Curran as his inspiration to want to pursue a career in coaching.

“To play for Jack Curran was an honor and a privilege,” Larranaga said. “It meant so much to me and had such an impact on my entire life…not just my basketball life, but my entire family and professional life.”

From a young age, Larranaga developed a passion for basketball by watching his older brothers, Bob and Greg, play at St. Helena H.S., the Bronx, where the family resided. Jim went to St. Helena Elementary School right in the Bronx, but he received a call one day in the eighth grade from Curran, inviting him to try out for a basketball scholarship with the Stanners.

Curran signed Larranaga, even though the it would mean an hour and a half commute to and from school each day. At first, Larranga’s father was against this decision, but Bob and Greg convinced him that Jim would be playing for the best coach in the city – Curran – and getting a top-notch education at Molloy.

“It was the best decision I could have made,” Larranaga said.

Larranaga fondly recalls his memories of Coach Curran and the CHSAA. His freshman and junior varsity teams won the city championship in 1964 and 1965, respectively, but his varsity teams were ousted in the city semifinals the next two years by Rice H.S., Manhattan.

“I think the CHSAA is the best high school basketball league in the country,” Larranaga said. “Competing in it as a high school player was a real thrill. We played against great players every day.”

Larranaga credits Curran for teaching him “everything” about basketball and life including discipline and an emphasis on the little things, which he now translates to his own players. Curran lives in Rye, N.Y., so he often drove Larranaga home to the Bronx and shared stories that each had a moral.

His dream coming out of high school was to play basketball at Boston College, Chestnut Hill, Mass., for Naismith Hall of Fame legend Bob Cousy.  Cousy recruited Larranaga but decided the young man was more suited to be a Division II player.

Larranaga instead accepted a scholarship offer to Providence College, Providence, R.I. One of his fondest college basketball memories was when he scored 39 pts. against Cousy’s Boston College Eagles.  Cousy said to Larranaga after the game that he had made a mistake.

In the sixth round of the 1971 NBA Draft, the Detroit Pistons selected Larranaga, a combo guard/forward. However, Curran had recommended Larranaga for an opening at Davidson College, Davidson, N.C., as an assistant basketball coach. Davidson allowed him to try out for the Pistons, but he did not make the team so instead took the coaching job.

After coaching jobs around country and even the globe, Larranaga settled in as the head coach at George Mason University, Fairfax, Va., in 1997.  While there, he transformed the program into a perennial Colonial Athletic Association (CAA) contender and had a winning record for 13 consecutive seasons.

His crowning achievement at George Mason came in 2006, when he guided the mid-major program to the Final Four of the NCAA men’s basketball “March Madness” tournament. Though the team did not win its own conference title that year, it received an at-large bid to the tournament as a No. 11 seed. Naturally, fans and analysts alike predicted an early exit for the Patriots.

However, the team had returned all five starters from the previous season and bought into Larranaga’s philosophy of “attitude, commitment and class.”

“Our players, rather than believing the experts, believed in themselves,” Larranaga said. “They had a tremendous amount of confidence in their ability.”

The team rattled off wins against Michigan State University, East Lansing, Mich., Wichita State University, Wichita, Kan., and the basketball powerhouse University of Connecticut, Storrs, Conn., before losing in its Final Four game to the eventual tournament champion University of Florida, Gainesville, Fla. At the time, George Mason was the first mid-major team to reach the Final Four in over a quarter century.

Though he was George Mason’s and the CAA’s career wins leader (271), Larranaga accepted the head-coaching job at Miami on April 22, 2011. It was a tough decision, but he said one of his lifelong goals was to coach in the Atlantic Coast Conference (ACC).

“When the opportunity arose, it seemed like the perfect time,” he said.

The Hurricanes finished 9-7 in conference play in Larranaga’s first year – marking the first time the team has finished with a winning record since joining the ACC.

Looking back at his career, Larranaga will never forget the words instilled in him by Coach Curran: “Practice does not make perfect. Perfect practice makes perfect.” 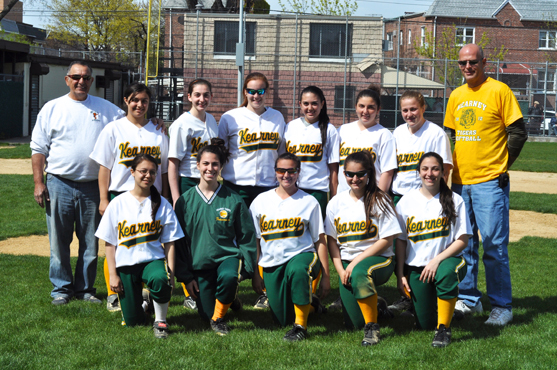 Both teams entered the best of three series 11-1. St. Edmund’s captured the first game 2-1, but Bishop Kearney earned a 5-3 win in the second game. The Tigers came out roaring in the tiebreaker game – scoring 11 runs in the top of the first inning.

Junior pitcher Gina Piro only needed one of those runs however, as she tossed a complete-game no-hitter. Allison Gasparino, Amanda DilLeo, Katie McManoman and Francesca Ingargiola each had three hits in the winning effort.

2 thoughts on “The Makings of an Inspirational Coach”