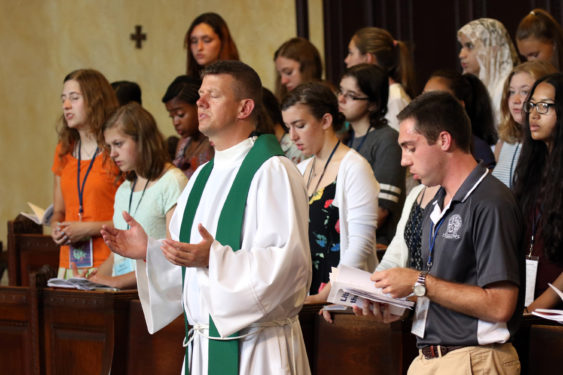 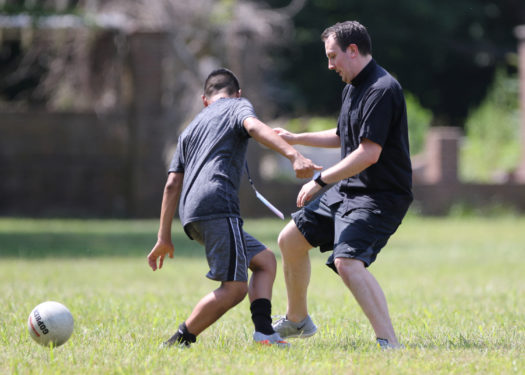 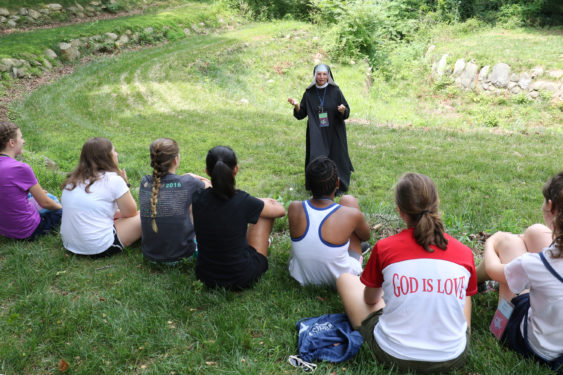 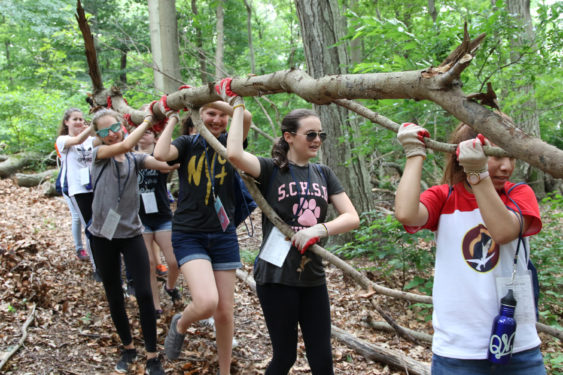 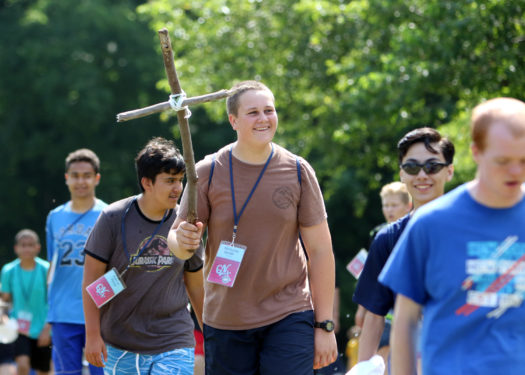 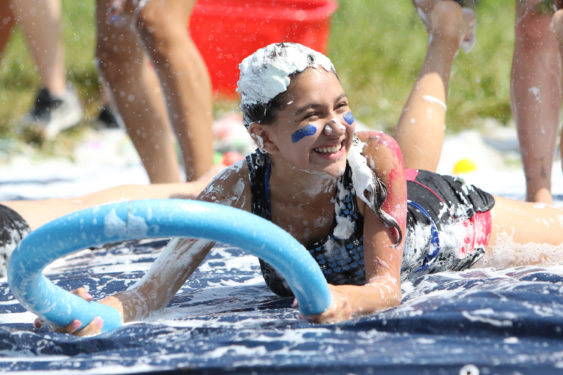 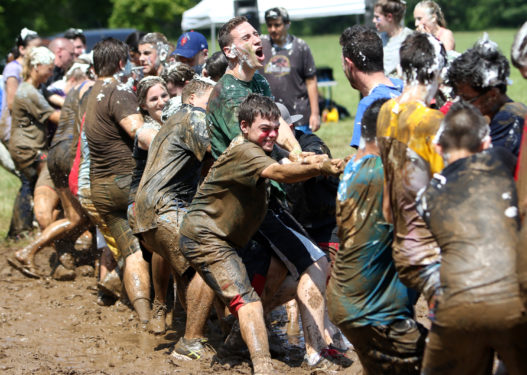 At the end of a well-fought tug-of-war, 76 mud-caked teenagers jostled one another into a group photo with dozens of soaking wet young priests, shaving cream-spattered seminarians and lay leaders.

Eleven Sisters of Life joined them, their blue and white habits remarkably unscathed. The last two youths made a sliding entrance through the muddy battlefield into the picture. Crosses lashed together from wood and branches and bearing names of saints were held aloft. Laughter rang out over the field and almost drowned out music from two huge speakers.

Commenting on the exuberant scene after he washed a copious amount of goopy oatmeal out of his hair, Father Joseph Fitzgerald said, “The joy of the Gospel is exploding off them!”

Father Fitzgerald, director of vocations for the Diocese of Rockville Centre on Long Island, spoke July 12 after the “Messy Olympics” event that was part of the first Quo Vadis Camp to be held in the diocese. It took place at Immaculate Conception Seminary in Huntington.

“Quo Vadis” is Latin for “Where are you going?” and is the question St. Peter is said to have asked the risen Jesus on the outskirts of Rome. It’s also the name of a camp program developed in the Jubilee Year 2000 in the Archdiocese of Portland, Oregon, to invite young Catholic men to learn more about the priesthood, deepen their faith and better discern God’s call in their lives.

The program has been used in other dioceses, including Allentown, Pa., where Bishop John O. Barres served as bishop from 2009 until he became bishop of Rockville Centre in 2017.

In Rockville Centre, the Quo Vadis camp was a five-day, four-night experience for young men and women ages 14 to 18 from the dioceses of Rockville Centre and Brooklyn. Staff were drawn from the ranks of seminarians, young priests, lay youth ministers and Sisters of Life.

The program included daily Mass, prayer, devotions, recreation and talks on topics including the universal call to holiness, trust and leadership; the role of the Holy Spirit in discernment; Mary as mother of missionaries; and the many dimensions of vocation to priestly, religious and married life. Campers also visited residents of a nursing home and cleared trails at the seminary. Most activities were done as a group, but young men and young women attended some gender-specific talks.

“Quo Vadis is really about a rich new harvest of vocations to religious life and priesthood on Long Island,” Bishop Barres told Catholic News Service. “This is a laboratory of how to cultivate vocations.”

“Those two words, ‘quo vadis,’ are a mission statement for young people who are motivated by real truth, real charity and a deep faith. Young people this age are capable of extremely powerful prayer and biblical depth,” he said.

Young women religious, young priests, seminarians and campers experience a culture of encounter and are challenged to holiness and mission, Bishop Barres said. “They encounter the next generation and inspire and are inspired by it. It’s not in the future, but in the here and now,” he said.

“We’re giving them an experience of faith that’s fun and instills tools for them to become disciples in the Catholic Church, such as the rosary, adoration of the Blessed Sacrament and ‘lectio divina,’” Father Fitzgerald said.

The campers are “encountering faith-filled young adult men and women. We’re called to be joyful disciples, not miserable, angry, ornery people. We’re promoting discernment between their hearts and the Sacred Heart of Jesus,” he said.

Father Fitzgerald announced the Quo Vadis camp in bulletins and communications with parishes and youth leaders with whom he has long experience. The event was fully subscribed and had a waiting list, he said. By his estimate, he’s conducted or worked at more than 50 camps in the past 20 years, including Life Teen in Atlanta.

At Quo Vadis, he said, campers “share an openness and faith” although they come from different educational, economic and racial backgrounds. “They have a desire to belong, to be known and loved, and met where they’re at.”

Sister Magnificat Rose, a Sister of Life, said she reminded campers that God has a plan for them.

“We want to help them see, learn and grow in their faith, open their hearts, grow closer to the Lord and follow Him. They have a great love to share with the world and I want to encourage them to prepare for whatever vocation God has for them by doing little things with great love.”

Mary Andrews said she didn’t know what to expect from the camp, but was awed that “every second is filled with faith, love, and God’s presence. It’s been the most unbelievable experience in my life – and I never say that!”

Andrews, who will attend Molloy College, Rockville Centre, this September, said the daily concelebrated Masses were “beautiful and unbelievably inspiring. To see nine priests there and have Father Joe tell us they’re here for us – this is not a dwindling church,” she said.

“I have a list of what I want to take home from Camp Quo Vadis,” Andrews added. It includes a moment of silence at grace before meals, the Liturgy of the Hours and Eucharistic adoration.