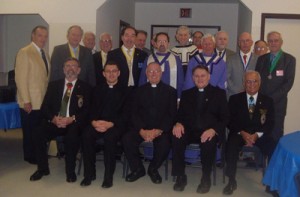 Nearly 700 guests will join Bishop Nicholas DiMarzio at the Futures in Education Annual Scholarship Fund Dinner on Oct. 2 at The Waldorf-Astoria, Manhattan. This year’s honorees are William J. Hogan, vice president and general manager of enterprise sales at NetApp, and Chris Mullin, former NBA player and Naismith Hall of Famer. Futures in Education provides tuition assistance and program support to the neediest of students and schools in the Brooklyn Diocese. The goal for this year’s dinner is to raise $2 million. All donations will be matched 1:2 by the Children’s Scholarship Fund.

The 31st annual Brooklyn Columbus Parade, sponsored by the Federation of Italian American Organizations, is next Saturday, Oct. 6. Arrive at St. Athanasius Church, Bensonhurst, for the pre-parade Mass at 10:15 a.m. Msgr. David Cassato, pastor, will be the celebrant. At 1 p.m., the parade begins on 60th St. and 18th Ave. and continues along the avenue to 84th St. The grand marshals are Bill Guarinello, president and CEO of Heartshare Human Services; Nicholas Miraglia of Miraglia Funeral Home; and Isabel DiMola, community superintendent, District 21.

Another celebration of Italian and Italian-American faith, heritage and culture will take place the following day, Oct. 7, at St. Mel’s, Flushing. Join Bishop DiMarzio for a solemn Mass in honor of Our Lady of Pompeii at the 31st annual Italian Apostolate Day. Event begins with a 4:30 p.m. procession followed by 5:30 p.m. Mass.

The Daughters of Charity are hosting a “Come and See” retreat day Sept. 29 at their residence at Our Lady of the Blessed Sacrament, Bayside. Open to single, Catholic women, ages 18-35. To register, contact Sister Denise, 410-646-2074 or dcvoc@doc.org.

This week’s Tip of the Tablet TALK Top Hat goes to Sister Catherine O’Leary, S.C., recipient of this year’s Father Victor Yanitelli, S.J. Award from Support Our Aging Religious (SOAR). SOAR will mark its 26th anniversary at the New York Athletic Club, Manhattan, on Oct. 3 at 6 p.m. SOAR is a nonprofit committed to financially supporting elderly and infirm members of Catholic religious congregations. SOAR annually presents the Father Yanitelli Award to a religious whose life reflects service to others. As an educator and pastoral minister, Sister Catherine has met the needs of others for over six decades. As co-founder and executive director of Women Helping Women, Flushing, she’s helped provide temporary housing to over 1,800 victims of domestic violence. Also being honored is Michael Maron, president and CEO of Holy Name Medical Center, Teaneck, N.J. For tickets, contact Sister Kate Clancy, 202-529-7627 or kclancy@soar-usa.org. 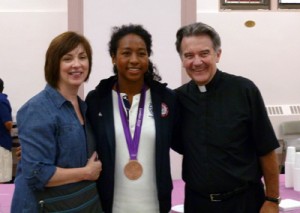 A Hero’s Welcome for

Brooklyn Olympian Lia Neal received a hero’s welcome at her home parish, St. Saviour, Park Slope, where she was honored during the 11:30 a.m. Mass on Sunday, Sept. 16. This summer, she earned a bronze medal in the women’s 4×100-meter freestyle relay in the London Olympic Games. Her team set a U.S. record, and Neal is only the second African-American woman to win a swimming medal in the Olympics for the United States.  She was congratulated by Father Danny Murphy, pastor, and Maura Lorenzen, principal of St. Saviour Catholic Academy. (Photo courtesy Geri Anne O’Beirne)