Dorothy Day captivated the nation with her social activist work and strong Catholic faith, and now, her seventh granddaughter Martha Hennessy is continuing the family tradition. 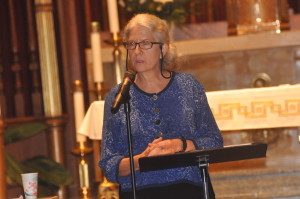 Hennessy was the special guest Sept. 6 at a Tablet Forum held at St. Sebastian’s Church, Woodside. The first-ever Tablet Forum in 2008 focused on Dorothy Day, so this forum signaled the process of coming full circle.

Hennessy – who bears a striking resemblance to her grandmother Day – now works part-time for the 30,000-circulation Catholic Worker, the eight-page, bi-monthly tabloid newspaper started in 1933 by Day and based at Maryhouse, a Catholic Worker hospitality home in Manhattan’s East Village.

The newspaper remains one cent per copy – the same price as when it started.

“The purpose of the paper is to continue to bring attention to the injustice and the violence and to also continue to uphold the morals and values of our Catholic teachings in light of 21st century needs,” Hennessy said. “We consider it (the newspaper) the organ of the movement. We try to cover issues that are relevant today that were relevant at the time when Dorothy started the paper.”

During the day before the talk, Hennessy and Father Frank Mann, organizer of The Tablet Forum series, visited the grave of Peter Maurin at St. John Cemetery, Middle Village. Maurin co-founded the Catholic Worker movement with Day, and Hennessy said visiting the site was a “beautiful experience.”

In her talk, Hennessy first spoke about the impact of growing up having Dorothy Day as her grandmother. Her earliest memory of her grandmother is sitting on her lap as a three-year-old. Day always made time to be with her family, which was based in Vermont, as often as possible, Hennessy recalled.

“She (Day) was a regular granny,” she said. “I knew there was something exceptional about her. We all did growing up, but she also was very ordinary and tried to be a regular grandmother. She was a very integral part of our lives.” 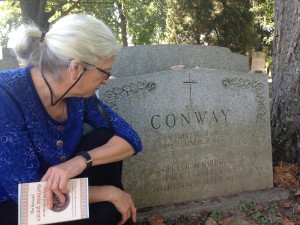 While her upbringing was heavily Catholic, Hennessy said she strayed from the Church during the middle part of her life. She was very busy raising her three children, and the harsh winters in rural Vermont made it physically difficult to get to Mass each week. She was still politically active like her grandmother, but she said she also had a tough time grasping Day’s devout Catholic faith.

“I always understood Granny’s (Day) life in terms of social justice, but it was her religiosity and her piety that I wasn’t quite sure of,” Hennessy said. “It was so deep; it was so profound. I shied away from it. I understood social justice and resistance, but I didn’t understand what being Catholic meant to me. It took me many years to really understand that.”

A turning point for Hennessy occurred in April, 2004, when images of the torture of Iraqi prisoners at Abu Ghraib prison were made public. Hennessy is trained as an occupational therapist, and she said the purposeful destruction of people’s bodies and minds really struck her.

To make matters worse, Hennessy’s son joined the military in May, 2004. Hennessy, of course, practiced her grandmother’s ideals of non-violence and pacifism, so she said it was extremely painful to see her son enter the armed forces.

Later that same year on Nov. 8 – Dorothy Day’s birthday – the U.S. decided to use chemical weapons in the Iraqi city of Fallujah. She called the invasion “a horrible juxtapositioning of her (Day) birthday with this horrible war crime that we were committing.”

“I found myself feeling so desperate about this (the events of 2004) and turning myself over to God,” Hennessy said. “I just found myself praying.”

While working as an occupational therapist in 2005 in Hawaii, Hennessy said her faith became firmly established, as she began attending Mass frequently. She said God had prepared her for this return to faith, which in turn led to her increased involvement with the Catholic Worker movement.

“I don’t think I could have rejoined the Catholic Worker and that resistance work without the foundation of faith,” she said. “That’s simply what my experience has been. I find my strength in understanding Scripture and studying the life of Jesus.”

In addition to speaking of her faith conversion, Hennessy centered her talk on a timeline of important events in the history and ideals of the Catholic Worker movement. There are currently 185 Catholic Worker communities worldwide that practice nonviolence in the face of violence, offer hospitality to the poor and have some sort of faith component.

“The longevity of the movement can be attributed to Dorothy’s charism and Dorothy’s incredible presence and persona but also a lot of diversity and tolerance within the movement,” Hennessy said. “There’s a running joke, ‘You don’t have to be Catholic and you don’t have to be a worker.’ There’s plenty of work to be done, so we come and do what we can and contribute what we can.”

Nearly 60 years after the start of the movement, Hennessy said the values of the Catholic Worker communities have stayed the same. The tabloid newspaper often features a past article from Dorothy Day to keep the focus on the mission.

“The teachings of Christ are still with us and still begging to be practiced,” Hennessy said. “No matter how times change, they don’t change. What keeps me grounded is working with the poor and resisting evil.”

Hennessy spends much of her time volunteering at different Catholic Worker communities across the globe. Her travels have led to her Russia, England, Mexico, Iraq, Egypt, Iran, Afghanistan and around the U.S. She also frequently participates in resistance work against nuclear power and war, the Guantanamo Bay Prison Camp and the siege of Gaza.

Serving the Lowest of the Low

She has served time in prison for her non-violent forms of protesting, but she said she is guided by her grandmother’s presence when speaking out against social injustice.

In the question-and-answer session that followed Hennessy’s presentation, a question was raised about Day’s potential canonization. The U.S. Catholic bishops have endorsed Day’s sainthood cause, and Hennessy said she prays often for her grandmother’s canonization.

“Being that she’s (Hennessy) in the family, she knows a lot about Dorothy,” said John Walsh, a parishioner at St. Anthony-St. Alphonsus, Greenpoint, who posed the question. “As far as I’m concerned, she (Day) should be a saint. That’s the way I feel about her.”

Another question regarding the current violence in Syria was also discussed at the forum. Carol Powell, a parishioner at Sacred Heart parish, Glendale, asked Hennessy if pacifism could work in this situation and how Day would respond to this issue.

Hennessy said that Day would ask what the purpose of bombing would be and to do unto others as you would want done to you.

“We’re never going to get to a point where everyone is going to do what they’re supposed to do,” Powell said. “We’re always going to have tyrants, and we have to figure out what to do about it. I don’t know that bombing is the answer either, but something has to be done. I’m not sure what it is.”

These days, Hennessy divides her time between her home in Springfield, Vt., and Maryhouse. She still travels often – volunteering and protesting – and said she learns new facets of her grandmother’s impact, social work and Catholic faith each day.

“It’s a daily gift for us,” Hennessy said, “to read her (Day) writings, read of her and live the life that she tried to show in her best way how to follow Christ here in our times.”