“Lucretius, On the Nature of Things,” Edited and translated by Anthony Esolen

“Poets in a Landscape,” by Gilbert Highet

“A Time of Love and Tartan,” by Alexander McCall Smith

“To Light a Fire On the Earth; Proclaiming the Gospel in a Secular Age,” by Bishop Robert Barren and John L. Allen Jr.

“Conversion: Spiritual Insights Into an Essential Encounter with God,” by Father Donald Haggerty

“St. Thomas Aquinas: Summa of the Summa,” by Peter Kreeft

“The Light of Christ: An Introduction to Catholicism,” by Father Thomas Joseph White

“The Cave and the Light: Plato Versus Aristotle and the Struggle for the Soul of Western Civilization,” by Arthur Herman

Barracoon: The Story of the Last ‘Black Cargo’,” by Zora Neale Hurston

“Gator: My Life in Pinstripes,” by Ron Guidry

“The Blood of Lambs,” by Kamal  Saleem

“Temptation of Forgiveness,” by Donna Leon

“The Depth of God’s Reach,” by Michael Downey 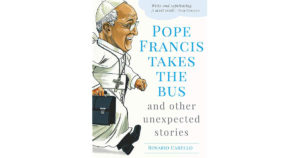 “The Color of Water,” by James McBride

“On Death and Dying,” by Elisabeth Kübler-Ross, M.D.

Our Lady of the Blessed Sacrament, Bayside

“Pope Francis Takes the Bus and Other Unexpected Stories,” by Rosario Carello

“Jesus and the Jewish Roots of the Eucharist, Unlocking the Secrets of Last Supper,” by Brant Pitre

“Fathers & Daughter & Sports,”  a collection of Essays by Jim Craig, Chris Evert, Bill Simmons and others

“Always Discerning – An Ignatian Spirituality for the New Millennium,”  by Joseph A. Tetlow,  S.J.

“The Fisherman’s Tomb: The True Story of the Vatican’s Secret Search,” by John O’Neil

“The Fourth Cup: Unveiling the Mystery of the Last Supper and the Cross,” by Scott Hahn

“Every Pilgrim’s Guide to Oberammergau and Its Passion Play,” by Michael Counsell

“Happiness in This Life: A Passionate Meditation on Earthly Existence,” by Pope Francis

“Spiritual Masters for All Seasons,” by Michael Ford

Our Lady of the Miraculous Medal, Ridgewood

“Vatican I,” by John O’Malley

“The Night of the Gun,” by David Carr

“The Transit of Venus,” by Shirley Hazzard

“Lord of the World,” by Robert Hugh Benson

“Street Gangs and God,” by Deacon Arnaldo A. Santos

“The President Is Missing,” by James Patterson and Bill Clinton

“The American Spirit,” by David McCullough