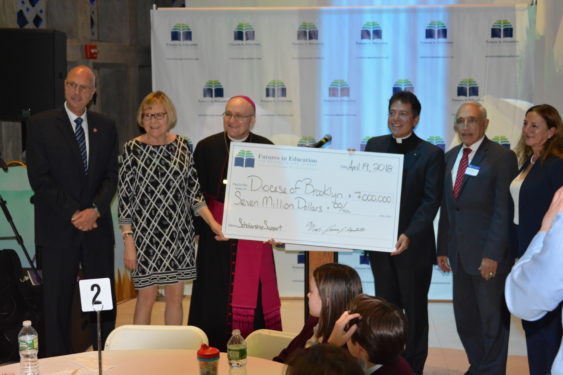 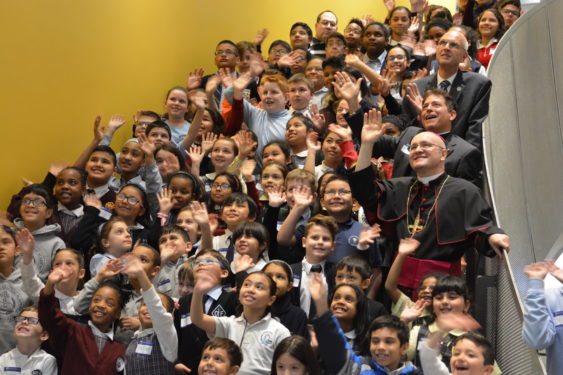 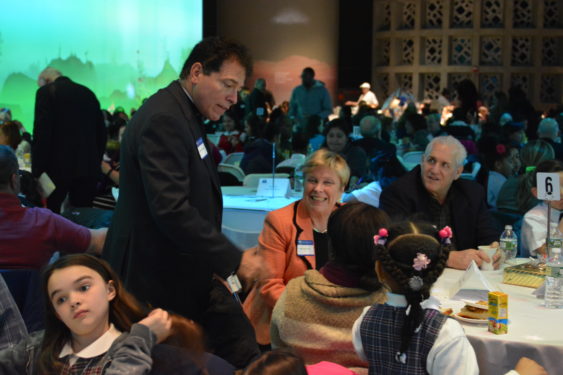 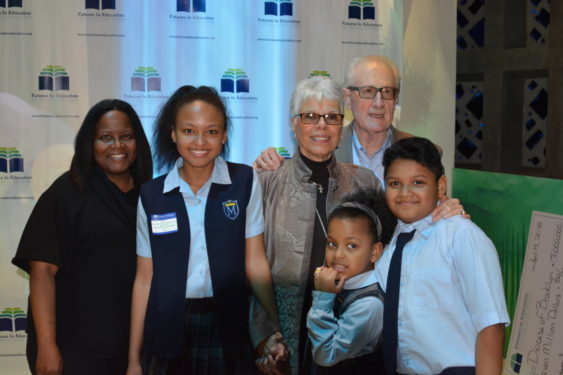 “Being an ‘Angel’ is the best job in the world,” Marie Maggi said at the Brooklyn Diocese’s Futures in Education’s annual Angel Reception held at the New York Hall of Science, Thursday, April 19.

The ‘Angels’ are adults who sponsor children from low-income families through the “Be an Angel to a Student” program. The goal is to give the children the opportunity to receive a Catholic education. Nearly 300 donors sponsor 700 kids with $1 million in scholarships each year.

More than 400 children, their families and sponsors enjoyed a night of hugs, photo opportunities, fun and food at the spacious hall in the Flushing Meadows-Corona Park.

“At first, we didn’t want to meet the students,” Ernesto said. “We thought about the concept of an angel as something that exists but you don’t see.

“But then we felt bad because we knew they were looking for their angels. So three years ago we decided it would be nice if they also saw us, because it is nice to see your angel.”

They have attended the reception every year since.

Seeing your Angels was the goal of the night. Around the tables, the conversations had the feeling of a family reunion.

“They are truly angels for us,” said María Serrano, an immigrant from Mexico whose son, Manuel Hernández, is sponsored by the Maggis.

“They came into our lives to help us without even knowing us and without asking for anything or saying anything,” Serrano said. “They help our children, not just financially, but also spiritually, because they inspire them to follow their dreams starting now, when they are young.”

Under the program, a person or a couple may sponsor one or more students in Catholic elementary schools by providing tuition assistance starting at $1,500 per year. For years, Brooklyn investor and real estate developer John Loconsolo has been a cornerstone of the program. This extraordinary Angel sponsors nearly 70 children. He was unable to attend the reception this year, but his presence was felt in many of the tables around the hall.

For the third year in a row, Futures in Education raised $7 million in scholarships for Catholic elementary schools and academies, as well as high schools in Brooklyn and Queens.

Msgr. Jamie Gigantiello, diocesan vicar for development, several members from the foundation’s board of directors, and the superintendent of schools, Dr. Thomas Chadzutko, presented Auxiliary Bishop James Massa with a check toward scholarships.

“The Angel Scholarship, like many of the other scholarships we offer, helps to close the gap between the actual cost and what families can afford,” said Bishop Massa, the keynote speaker.

Roisin Garry, an eighth grader at St. Mel Catholic Academy, Flushing, who is the oldest of six siblings, thanked the Angels for their support.

Bishop Massa also mentioned a special guest, Camela Cruz, who was a recipient of an Angel scholarship 15 years ago, when she was a student at The Mary Louis Academy in Jamaica Estates.

Today she is a finance manager at Johnson and Johnson.

“I was part of the Angels Program for only two years,” Cruz said. “It was life changing. I remember it first started when I was in seventh grade and (I was) probably not doing as well as I should in school, but I saw how hard my dad was working to pay for my tuition to give me the Catholic education he knew was best for me and my family.”

Her parents, immigrants from the Philippines, were devout Catholics and very committed to giving their children a Catholic education.

“The Catholic religion is very strong in the Philippines and kept us very close,” she said. “In everything we did, whether it was a struggle or a blessing, our faith is what got us through.”

And then something happened.

“When my principal helped connect us with the program, and I met my Angel, something clicked in my head and made me realize, if someone is willing to give out his own personal money, someone who has his own family… it really changed my life, it turned my life around. It made me take my education much more seriously.”

That is the reason why 15 years later, she decided to attend the Angels Reception.

“I made it a commitment to myself that one day I would come back and be an Angel myself,” Cruz said. So Cruz attended the reception to start her new involvement with the program – this time as an Angel.

“I want to be an Angel because I want to give that same chance I was given. Just knowing that there are complete strangers out there willing to help you and your family does something to you. I will never ever forget that.