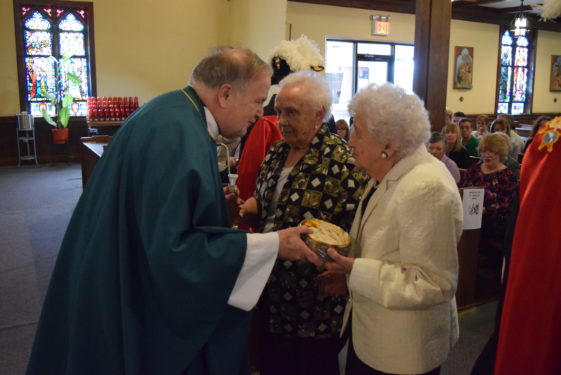 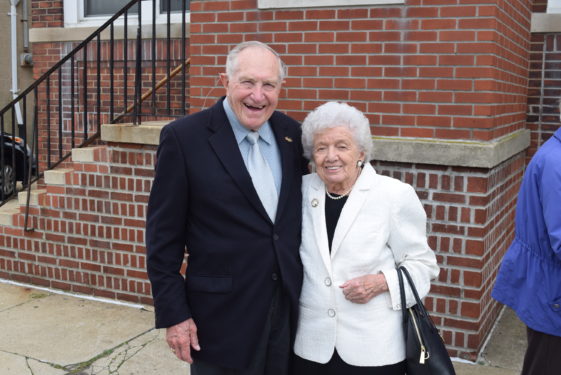 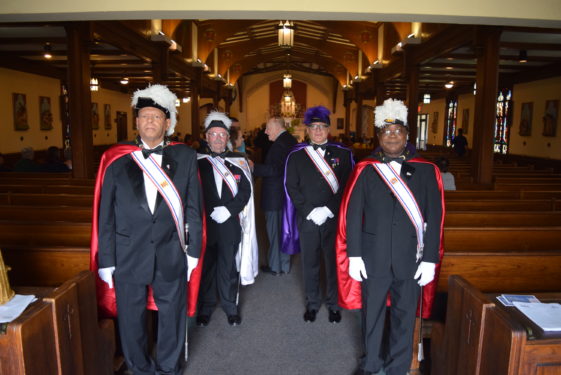 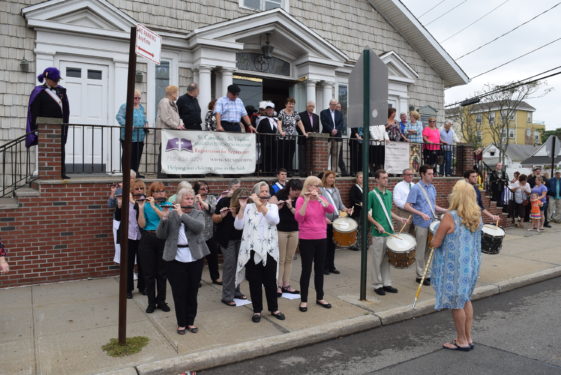 More than 30 members of Msgr. Burke’s family with people from as far away as Texas and Hawaii attended.

Msgr. Burke, who died in 2005, was the founder and director of the St. Camillus Band. Alumni played on the church steps before Mass to welcome participants.

Members of the Knights of Columbus Rockaway Msgr. Burke Council led the procession and dedicated a plaque in his honor in the church vestibule.

Fowler remembered her brother fondly, “He started the band and they always marched in the St. Patrick’s Day Parade. He was always very proud of that. He was a leader type and people looked up to him. I was surprised so many people were able to get out here today, but he kept the family together. He always had us down on the beach every summer and he did everything to keep the family together, no matter how big of a family we became. We continue to miss him.”

Her husband, Bill Fowler, added, “He was a great priest and when he came to Rockaway, he started the band and really showed what he loved doing. He was almost like a military conductor when he was working with the band but it’s because he loved it and wanted the best of them. The band even went to the Orange Bowl a few times to play and those were very proud moments for him.”

Father Ahlemeyer remembered his friend and role model. “I remember many Saturday nights here after Mass he would be sitting at the table and he was doing the medical bills for the diocese. He was a blessing to me because he taught me what it meant to be a pastor and showed me all the work that had to be done. I was told as a young priest an Irish proverb which goes, “When you’re gone, you’re gone,” but that is not true as Msgr. Burke’s presence is still felt so strongly in this parish, his family members, the band, and the Knights of Columbus. We are all here today to remember someone that meant so much to all of us to this community. The plaque is a small way to remember him for everything he did but now his name is with us forever.”

Larry Kelly, a member of the Knights of Columbus, still feels the presence Msgr. Burke had on his family and community.

“He was the chaplain for 57 years for Rockaway Council,” he explained. “All five of my children were in his band and they went and practiced rain or shine and always marched in the St. Patrick’s Day Parade. He was always there to lead them.

“Many years, he even marched twice. He would first march with the FDNY and then go back and march with County Sligo. I had the pleasure of knowing him through the Council, but grew to consider him a friend. He was tough but always a gentleman,” Kelly said.

One thought on “Strike Up the Band Once Again for Msgr. Burke”