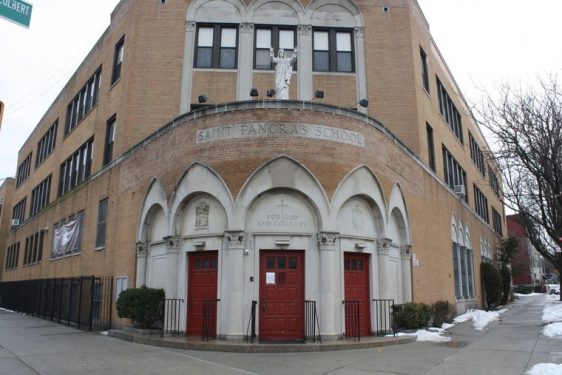 Citing increasing costs and dwindling enrollment, St. Pancras School in Glendale has announced that it will close effective June 30.

The announcement was made in a letter to parents from Diana Soto, principal, and Father Francis J. Hughes, pastor.

The current budget showed a deficit of more than $250,000 with only 105 enrolled from kindergarten to eighth grade. The tuition was listed as $4,880, compared to the cost about $15,000 to educate each student per year. The school has lost

nearly 100 students in the past six years.

“The parish does not have the means to subsidize the school for the future, and we cannot do so at the expense of other parish programs and ministries,” the letter stated.

“To attempt to continue the school while further curtailing academic services and extra-curricular activities would be a serious disservice to your sons and daughters.”

The neighboring Catholic schools, St. Matthias, Ridgewood, and Sacred Heart, East Glendale, have invited students to consider attending their institutions. An information night with officials from those schools was conducted Jan. 18 at St. Pancras.

The Diocese of Brooklyn will provide a one-time grant of $500 for each child choosing to attend another Catholic school in the fall.

Two Campuses Into One

Meanwhile, Divine Wisdom Catholic Academy, which has campuses at St. Robert Bellarmine parish, Bayside, and St. Anastasia, Douglaston, announced that it will merge the two, with the Bayside building closing after the current school year.

The merger is due to declining enrollment on both campuses, but more so in Bayside because of the neighborhood’s changing demographics. This has led to a projected financial deficit of $325,000 for the 2017-2018 school year.

According to the school officials, the cost per student far exceeds the tuition. Total enrollment decreased by 10 percent in the last year alone.

No capital improvements need to be made to achieve the merger. Thanks to recent contributions from generous benefactors, the Douglaston campus did undergo improvements including a new state-of-the-art STEM lab, a music conservatory and an early childhood development center. The students from the Bayside campus were already traveling to the Douglaston setting to use the STEM lab on a weekly basis.

Because the campuses are about two miles apart, the location change should not pose a significant inconvenience in terms of transportation to and from school.

There is no immediate plan to rent the Bayside building.

One thought on “St. Pancras School Announces It Will Close Doors This Year”