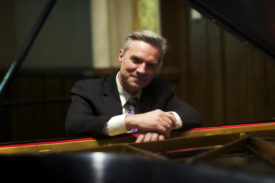 Following an extensive nationwide search, the Board of Trustees of St. Joseph’s College, Brooklyn, has announced that Donald R. Boomgaarden, Ph.D. will become the college’s eighth president effective July 1.

A distinguished scholar with extensive experience in higher education, Dr. Boomgaarden most recently, served as provost and senior vice president for academic affairs at the University of Scranton in Scranton, Pa.

Prior to that he was dean of the College of Music and Fine Arts at Loyola University New Orleans and assistant vice president of academic affairs at Loyola University Maryland, among other administrative and academic positions over the course of three decades. He will succeed SJC’s current president, Dr. Jack P. Calareso, who began his tenure at the College in July 2014.

Dr. Boomgaarden notes that he was particularly moved by his recent visits to the SJC campuses in Brooklyn and Patchogue.

“The inclusive and transformational mission of St. Joseph’s resonates deeply with me, and I can tell from my campus visits that the students, faculty and staff truly strive live up to their motto, esse non videri: to be, not to seem,” said Dr. Boomgaarden.

“At a time when many colleges and universities are challenged by a rapidly changing world, St. Joseph’s stands for what is great about American education, and for what is most important to our students and their parents.

“Deeply rooted in the liberal arts tradition, informed by the wisdom of the Sisters of St. Joseph, the College is committed to offering an education that prepares our students for meaningful careers and provides them with the knowledge to transform the world for the better. I am so proud to be a part of this wonderful institution.”

Dr. Boomgaarden earned his bachelor’s degree from Texas State University in San Marcos, Texas, and his master’s and doctoral degrees from the prestigious Eastman School of Music at the University of Rochester in Rochester.

A Fulbright Scholar, he also graduated from Harvard’s Institute for Management and Leadership in Education Program as well as the Association of Jesuit Colleges and Universities Seminar on Higher Education Leadership at Loyola University Chicago.

A music enthusiast, concert pianist and country fiddler, he is also a noted historian of 18th-century opera, music aesthetics and harmonic theory, on which he has written and been published extensively.