Designation Is Pope Benedict’s Final Gift to the Diocese 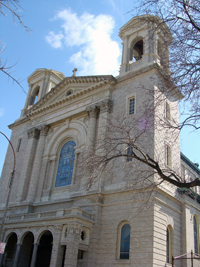 In one of his final acts as pontiff, Pope Benedict XVI designated St. Joseph Church in Prospect Heights as a co-cathedral for the Diocese of Brooklyn.
Parishioners applauded when the announcement was made during the Spanish and English Masses at the church on Sunday, March 3. Msgr. Kieran Harrington, administrator, celebrated the English Mass, assisted by transitional Deacon Dwayne Davis.
“This year will be a special year, one like none other,” Deacon Davis told the congregation, “because our Holy Father has designated St. Joseph’s to be a co-cathedral.”
St. James Cathedral-Basilica, Downtown Brooklyn, was previously the only cathedral in the 160-year history of the diocese.
Most parishioners of St. Joseph’s were aware that Bishop Nicholas DiMarzio had submitted a petition to the Vatican to elevate the church’s status last year.
Bishop DiMarzio received a papal decree, predated for March 19 of this year, approving the request. However, Msgr. Harrington informed the congregation that a new decree with a corrected date was issued three days after the pope announced his resignation on Feb. 11. 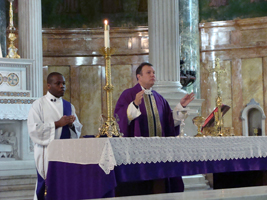 “Since my arrival here as Bishop of Brooklyn almost 10 years ago, it was evident that St. Joseph’s, located in the Prospect Heights section of Brooklyn, is at the heart of a new Brooklyn,” Bishop DiMarzio said in a written statement.
“St. Joseph’s is in a location anticipated to be the most densely populated area in New York City, and it should be a prominent fixture in the re-development at this exciting time in our borough,” he said.
Msgr. Harrington said he feels it is appropriate for the church to become a cathedral not only due to its grandeur and vast seating capacity, which will better accommodate diocesan celebrations, but also on account of its parishioners.
“What is most precious are the people,” he said. “The church is not a building. It is the people… This is an honor conferred on you, the people of God.”
Today’s parish – an eclectic, intergenerational mix of hipsters, families, professionals and Spanish-speaking immigrants, stands on the shoulders of the Irish immigrants for whom Archbishop John Hughes of New York established the parish in 1850. The Gothic-style church was built and later dedicated by Bishop John Loughlin, Brooklyn’s first bishop, on March 18, 1861. It was the site of the funeral Mass for Brooklyn Archbishop Thomas E. Molloy in 1956. 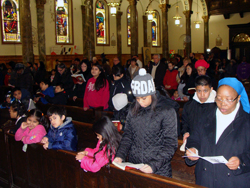 Due to the poverty of the area in more recent years, the church building had fallen into disrepair, but was also spared any major remodeling, which might have destroyed its original beauty.
Under Msgr. Harrington’s administration since 2006, the church has undergone extensive exterior renovations with the installation of a new roof and the cleaning and reinstallation of the church bell and stained-glass windows, which depict the life of its patron.

Interior renovations are ongoing. A “pennies for paint” drive is currently underway to raise funds for the cost of plastering and repainting the church ceiling.
He hopes all repairs will be completed before the feast of St. Joseph, 2014, which is the anticipated date of the church’s consecration as the co-cathedral.
“This is a vibrant community and becoming more and more so,” the monsignor said, referring to the neighborhood’s revival with the opening of Barclays Center, which is ushering in new people, businesses and housing developments.
“This area of Brooklyn is blowing up,” added Ede Fox, active parishioner and N.Y. City Council candidate.
Noting that the section around Barclays Center has one of the densest U.S. Census tracts in the city, she said,
“We need to have a central place for people to worship so this seems like the right place for a cathedral – the center and heart of Brooklyn.”

For parishioner Eric Ver, last Sunday’s announcement was an answered prayer. “When I joined the parish in 2003, it was crumbling. The building was dilapidated, and there were not many people in the congregation,” he said.
“I prayed to St. Francis to rebuild this church, and then Msgr. Harrington came and started doing that.”
Over the last decade, Ver has moved several times and now lives in Astoria but returns to Pacific St. every Sunday for Mass.
“My hope is that others come to know the Gospel of Our Lord through this church,” he said. “I believe it is part of God’s plan for the new evangelization.”
Previous Diocesan News Story
Next Diocesan News Story