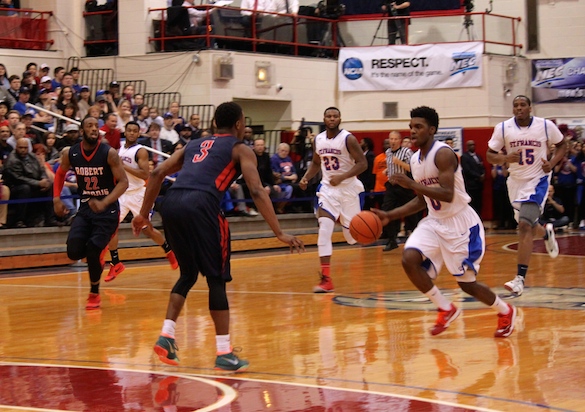 St. Francis College in Brooklyn Heights is one of five Division I schools – along with Army, the Citadel, Northwestern and the College of William and Mary – to have never made the annual NCAA Tournament. 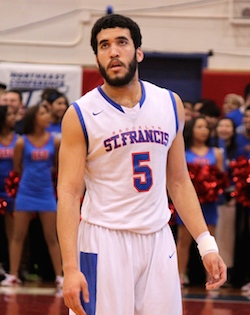 Despite a valiant effort Tuesday night in front of over 1,000 fans in the Northeast Conference (NEC) title game, that streak will continue for at least another season.

Regular-season NEC champs St. Francis remain the lone charter member of the NEC to have never won the conference title.

The Terriers were paced by Tyreek Jewell, who poured in a game-high 19 pts. NEC Player of the Year Jalen Cannon notched a double-double with 10 pts. and 12 rebounds. His 21 double-doubles this season set an NEC record. 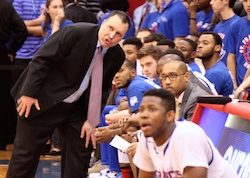 St. Francis led by six pts. at halftime, but Robert Morris had all the momentum for most of the second half. The Colonials led by 10 with just under six minutes to go.

But the Terriers roared back to cut the deficit to one with 16.2 seconds to go. Down three a few seconds later, Jewell was fouled beyond the three-point line and had a chance to tie the game with three free-throws. However, he missed the first two and was forced to miss the third.

After Robert Morris missed both free-throws at the other end, Terriers’ forward Lowell Ulmer grabbed the rebound and heaved a three-quarter-court shot. The ball looked to be on line, but it hit the back of the rim and bounced out, giving the Colonials the NEC title win. 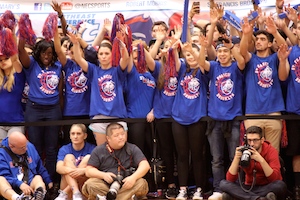 “This atmosphere that we had tonight…no one though that was possible at St. Francis College, and we had that here tonight,” Braica said.

It was an exciting run for St. Francis, who will play next week in the annual NIT Tournament. It’s the college’s fourth-ever berth in the NIT and first since 1963.

“It’s disappointing, but we can’t really think about it since we’ve got the NIT coming up,” said Cannon, who is the career leader in point and rebounds at St. Francis. “We need to use it as motivation and put our best foot forward and keep going.”

All photos by Jim Mancari.