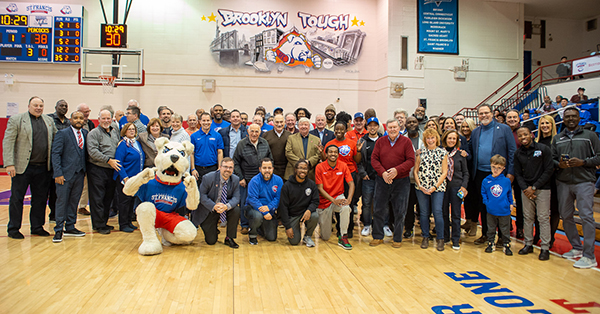 After 50 years, the doors of the Daniel Lynch ’38 Gymnasium on the Remsen Street campus of St. Francis College, Brooklyn Heights, have officially closed.

St. Francis hosted its Legends of Remsen Street event on Nov. 19-20 to celebrate the final men’s and women’s basketball home games at the 180 Remsen St. campus location. The new main campus is located at 179 Livingston St. in Downtown Brooklyn.

While it’s an impressive facility, the new space does not include a basketball court. The Terriers will instead play their home games at Brooklyn’s Pratt Institute, Clinton Hill.

The men’s team relied on a late surge in the second half to capture a 61-58 victory over Saint Peter’s University, Jersey City, N.J. Senior guard Larry Moreno paced the Terriers by tying his season-high with 19 points. Junior forward Josiah Harris notched a double-double with 16 points and 13 rebounds.

The following day, the women’s team took the floor in its final home game. The Terriers fought hard against the University of Maryland, Baltimore County, but fell 64-59. Senior guard Alyssa Fisher led the way with 19 points, while sophomore forward Sheridan Kavanagh added 12.

“Lynch ’38 Gymnasium has played host to some of the greatest moments and greatest players in program history,” said men’s basketball head coach and Bishop Ford H.S., Park Slope, graduate Glenn Braica. “While we will certainly miss playing in this historic building, we were thrilled to honor our legends around the final games on Remsen Street.”

“We cherish any opportunity to have alumni back on campus showing support for our current generation of student-athletes, especially those from our women’s basketball program,” said women’s basketball head coach Linda Cimino. “These celebrations were a memorable way to honor their legacy and pay tribute to the home of so many great moments in our history.”

Daniel Lynch was a two-time All-City First Team basketball selection while at St. Augustine H.S., Park Slope. He then led St. Francis College in scoring in each of his seasons from 1933-1938. He began coaching the team in 1948 and retired with the most wins in program history at 283.

After the men’s game, the school held a ceremony in the Genovesi Center commemorating the five decades of sports at the Remsen Street campus. The full schedule of events kicked off the weekend prior with the SFC Aquatics Center celebration to honor the men’s and women’s swimming and diving teams as well as the men’s and women’s water polo squads.

“180 Remsen has been an incredibly special place for me during my time at St. Francis,” Garcia said. “Just like so many in our Terrier family, these buildings – and the people I’ve been blessed to share them with – have shaped me into the person I am today. I am honored to have the opportunity to see Remsen Street off in a way only St. Francis can.”

Of course, “Mr. St. Francis” himself Dennis McDermott, who left the school as the all-time leading scorer in men’s basketball history, was on hand for the festivities. He and his wife, Cathy, received an ambassador award named after late St. Francis College President Brendan Duggan and late former President and Chancellor Dr. Frank Macchiarola.

McDermott shared his memories of Lynch and the gymnasium that bears his name. Lynch’s No. 4 jersey from his time as a player for St. Francis was retired alongside McDermott’s No. 22, Jeanne Zatorski’s No. 15, and Karen Erving’s No. 40.

“Mr. Lynch was really influential with the gymnasium since he was the athletic director at the time,” McDermott said. “He was a true Franciscan. He cared about people and never left St. Francis College. He played there, he coached there, and he taught physical education there.”

McDermott also recalled playing against top opponents in the gymnasium in front of loud, spirited crowds. Saint Peter’s, Seton Hall University, and Providence College were among the notable and formidable opposing teams to take the floor.

While the time went by so fast, as McDermott said, he thoroughly enjoyed reliving the 50 years of Remsen Street memories. As St. Francis College prepares for the next chapter in the school’s sports history, the Terrier community will still support its student-athletes – no matter which court or pool they call their home.