Every two years, the St. Clement Pope, Jamaica, CYO track team hosts a one-mile race at the parish to raise funds for the program.

Called “Long Stride,” the race began in 2000 and has aided the development of the St. Clement Pope track team, which was re-established in 1986 and has won five straight boys’ CYO indoor track titles.

The 20 members of the St. Clement Pope track team turned out for Long Stride 2012 held Oct. 13, which raised $300 for the team. The race began near the parish and finished one-mile later in front of the convent.

“It’s great to see that the track team is still doing well,” Crawford said. “My brother is on the current team, and I’m hoping that St. Clement keeps winning.”

On the women’s side, Christina Reinle posted a time of 6:49 to take home the female title. She is a member of the Alley Pond Striders running team, which was tasked with scoring the day’s race. Reinle’s father, Laughlin, also raced and finished first in the 55-and-over category.

“My dad got me into running seven years ago and has been a great running partner and trainer since,” Reinle said. “It’s so wonderful to be able to bond with him over running and even better to share wins and trophies with him. He and my mother have made me into the person I am today, and he is the runner I aspire to be.”

The St. Clement Pope track team added the Manny Ramjohn Memorial Award to the Long Stride festivities in 2002 in honor of the late Trinidad and Tobago Olympian who was the grandfather of one of team’s members. Andrew DeFreitas and Euyanah Bermingham were this year’s award winners.

“I think the race was a moderate success,” Pasqual said. “The kids thought this was a race with a really fun atmosphere because of the special T-shirts, raffles and refreshments. It was also a special time because this is the only time the runners, their parents and even our moderator can all run at the same time.”[hr] Contact Jim Mancari via e-mail at jmancari@desalesmedia.org.

Over 100 CYO athletes from Our Lady of the Snows parish, North Floral Park, wore their uniforms to church on Sunday, Oct. 14, for a Mass of thanksgiving marking the opening of another year of CYO sports in the parish.

Father Kevin McBrien, the new pastor and CYO moderator, was happy to see the large turnout of young people and their families. He told the young athletes stories about his own CYO experiences as a young boy growing up in Brooklyn.

In his homily, Father McBrien acknowledged that Oct. 13 marked the first weekend of Pope Benedict XVI’s Year of Faith and spoke of the need to grow in faith through Jesus Christ.

Deacon Joe Catanello, diocesan director of CYO, assisted Father McBrien at the altar. Father McBrien read the CYO prayer, written by Deacon Catanello, which says “…thank you for giving us a chance to teach our faith to others by our actions.”

One of the goals of CYO’s mission is to use sports as a vehicle of evangelization throughout Brooklyn and Queens. 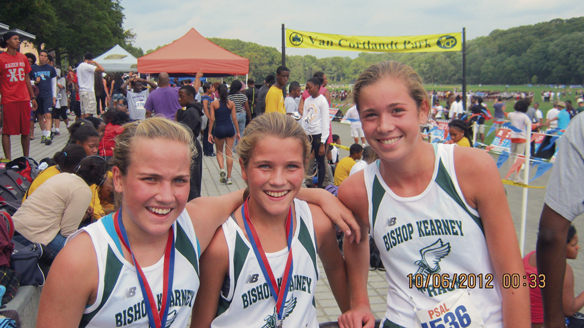 Novice (age nine and under) and Bantam (age 10 and under) boys teams will be guaranteed two games. Contact IBL commissioner Mike Rossetti at 917-295-0993 for more information.

Will you be running in this year’s N.Y.C. Marathon on Nov. 4? If so, we’d like to hear from you. “Good Sports” will profile the local marathoners in The Tablet’s Nov. 3 issue. There are only a few weeks left to allow ample time for an interview. Contact Tablet sports reporter Jim Mancari at jmancari@desalesmedia.org.