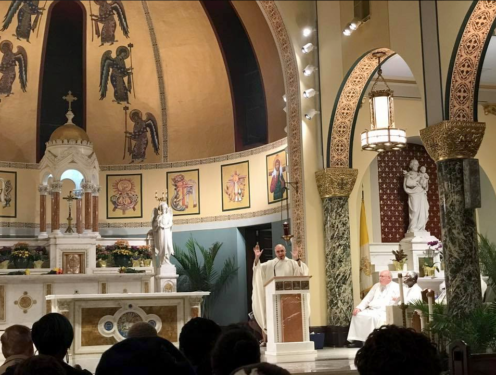 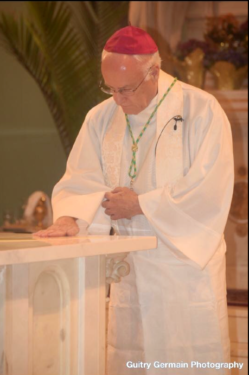 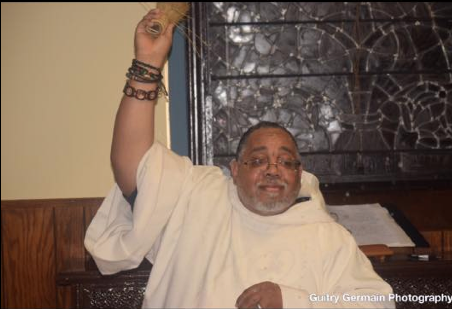 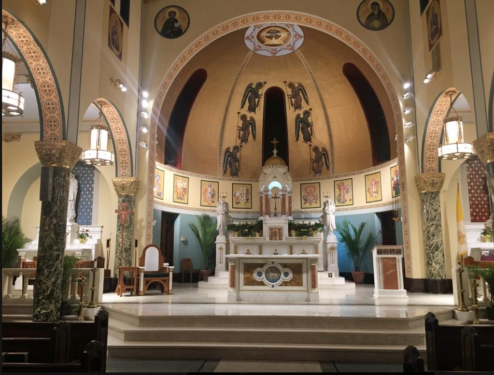 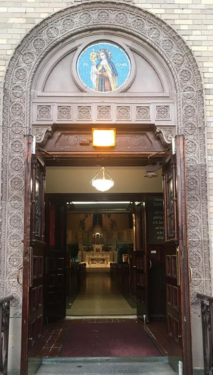 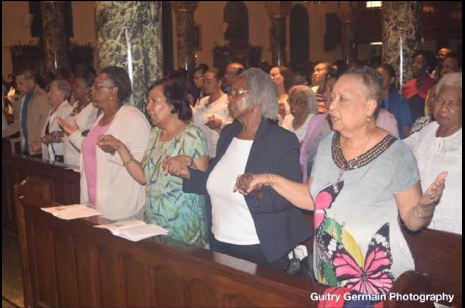 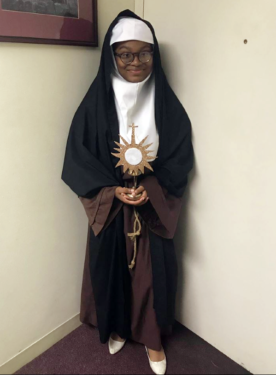 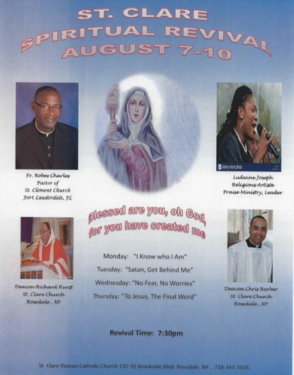 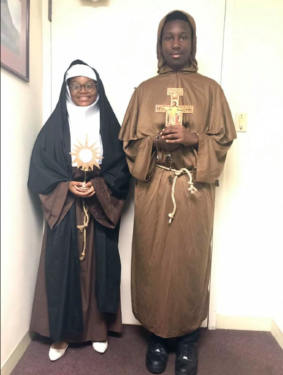 Look up the word “revival” and the definitions include “a period of renewed religious interest” and “an emotional evangelistic meeting.”

St. Clare’s parish, Rosedale, held a spiritual revival Aug. 7-10 that was followed by a Mass on the feast day of St. Clare, Aug. 11, to re-dedicate its renovated church building. The re-dedication liturgy was celebrated by Auxiliary Bishop Raymond Chappetto.

The first night of the revival easily met expectations of what a revival could be. With a theme of “I Know Who I Am,” about 250 of the faithful, most of whom came from St. Clare’s but some from other parishes, braved rainy weather to participate in prayer, music and a liturgy that was loud, joyous and inspirational.

“This is sensational,” said Hilary Michael, a St. Clare parishioner and “core committee” member that helped plan the revival with parish parochial vicar Father Yvon-Hector Aurelien. “This is like you are one with God. God is the vine and we are the branches.”

The 41-year-old Father Aurelien, who goes by Father Yvon-Hector, was ordained in 2016. He said he approached St. Clare’s pastor, Father Andrew Struzzieri, to do something different for the annual feast day and proposed a revival to help the parish grow spiritually.

The focus of the four nights were the words of St. Clare: “Blessed are You, oh God, for You have created me.” Each night had a different theme including “Satan, Get Behind Me” and “No Fear, No Worries.”

“The aim is to form a community of faith in the parish on actions and not just words,” Father Aurelien explained.

“He was on fire,” Father Struzzieri said of the younger priest’s collaboration with parishioners. “It’s a beautiful thing to see a newly ordained priest bring people together.”

For the revival, Father Aurelien brought in gospel singer Ludwine Joseph to lead the music and Father Robes Charles, a fellow Haitian and pastor of St. Clement Church in the Archdiocese of Miami, Fla., who was recommended as an inspirational homilist. Joseph’s singing began the evening and set the tone for the revival with hymns that got the congregation on their feet with many raising their hands to heaven as they swayed to the songs of ecclesiastical praise.

It was a congregation that welcomed the upbeat spirit with open arms.

“I hope to have that experience feeling the Holy Spirit inside me,” said Dianne Sealy-Soon, another “core committee” member and parish administrative assistant, “that feeling inside of you you’ve never felt before.”

Vicky Sooknanan, came from St. Joseph’s, Jamaica, at the invitation of her friend, Yolanda Stowe.

“I came to hear the teachings of Jesus,” Sooknanan said, “and to be inspired in my heart.”

Eighteen-year-old Ramone Golding, who works at St. Clare’s and formerly lived in Our Lady of Refuge parish, Flatbush, said he wasn’t sure what to expect but sought closure from the wounds of bullying and to hear words that would make him a better person.

Before the night’s liturgy began, the Rosary was said in English, Spanish and Creole recognizing the diversity of the St. Clare’s community. In his homily during Mass, Father Charles was a shining example of enthusiastic evangelical style, exhorting the congregation in gestures and words, spoken in both English and Creole. He told them that they are children of God and to put into practice the spirituality of St. Clare.

“Go within to say to yourself, how can I imitate St. Clare to encourage other Catholics,” he said. Describing the congregation as “priestly people,” he called them all miracles, created by God to be unique.

“Live up to the dignity of who you are,” he added. “You can better the world. Share your faith and share your hope.”

After almost three hours, the evening ended with the congregation praying during exposition of the Blessed Sacrament as voices were raised in multiple languages. That was followed by a procession of the monstrance up and down the church aisles. Joseph continued her vibrant hymns and the music bounded throughout the renovated church interior with its new white marble altars, its gold leaf half-dome ceiling over them and icons that included the Blessed Virgin Mary, St. Francis of Assisi, Venerable Pierre Toussaint and St. Josephine Bakhita

Anne O’Connell, a St. Clare’s resident since 1947, said afterwards it was truly spiritual. “It reminds me that it was a wonderful parish then and it is one now.”

And what of Ramone Golding, the Brooklyn transplant? “It revived me,” he said. “When I heard the words of Father Charles, it was something that made me happy.”