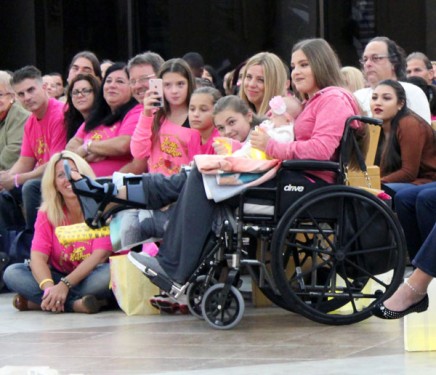 Hundreds of members of the church and school community at St. Bernard parish, Mill Basin, turned out for a prayer service and luminaria ceremony on Thursday, Oct. 20, to honor and support a local girl battling bone cancer.

Kaitlyn Bernhardt, who graduated from St. Bernard Catholic Academy last June, was diagnosed with osteosarcoma in her right leg as she was getting ready to begin freshman year at Bishop Kearney H.S., Bensonhurst. She underwent surgery to remove the growth earlier this fall. 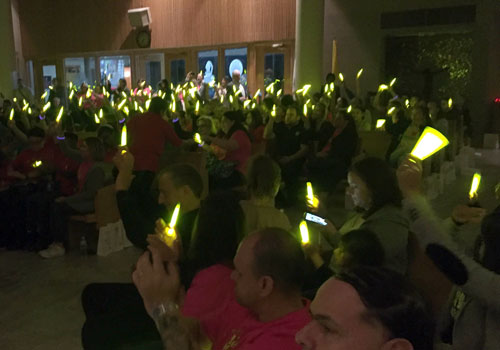 Bernhardt, who attended in a wheelchair. She sat in the front with family, including an infant cousin who sat on her lap.

The church was a sea of pink as Bernhardt’s former principal, teachers and schoolmates from St. Bernard, along with friends, neighbors and local Knights of Columbus donned “Team Kaitlyn” shirts, which were sold at the doors of church.

White paper bags, like the one seen at left, were sold for attendees to write messages of support and hope for Bernhardt and others fighting cancer as well as those who have lost the battle. Toward the end of the event, glowsticks were placed inside each bag to illuminate the church.

The event was organized by St. Bernard Catholic Academy, in cooperation with the Home Academy Association and the local chapter of the American Cancer Society’s Relay for Life. All proceeds from the evening went to the Bernhardt family to help with the costs of treatment.