The score was tied 1-1 after Briana Payano scored for St. Andrew’s. Lea Vallone scored the winning goal at the end of the first half with a beautifully-timed goal after receiving a perfect crossing pass from deep in the far corner from Emily Tenaglia.

A last-minute penalty kick was awarded to St. Patrick’s, which was stopped by St. Andrew’s goalie Rachel Johnson, which preserved the exciting win for St. Andrew’s.

These two teams have faced each other a number of times, and each game has been a hard-fought battle. The championship proved as exciting as their previous match-ups.

The St. Andrew’s girls’ team is comprised of sixth through eighth graders, though the team competes on the eighth-grade level. St. Andrew’s is coached by both Paul Vallone and John Luetich, who both have daughters on the team. 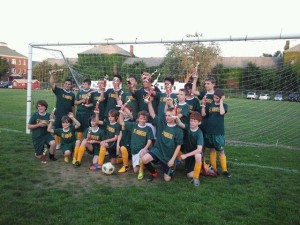