Kaila Berry, a senior guard on the St. John’s Prep, Astoria, girls’ varsity basketball team, will be continuing her hoops career at Fordham University, the Bronx. As a sophomore in 2019-2020, Berry averaged 11.8 points and 9.0 rebounds per game en route to her second-straight nod as a Tablet All-Star. Her junior season was canceled due to the COVID-19 pandemic.

Former Holy Cross H.S., Flushing, football standout Dean Marlowe has begun his sixth season in the NFL. The Knights’ 2010 graduate is a free safety for the Detroit Lions. The 29-year-old Queens native has also played professionally for the Carolina Panthers and Buffalo Bills. 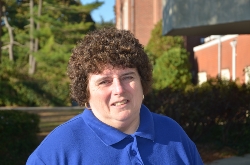 Karen Andreone, a member of the Brooklyn-Queens GCHSAA Hall of Fame, died on Aug. 30 at the age of 71. Andreone held numerous roles in athletics in both the Brooklyn Diocese and the Diocese of Rockville Centre. Most notable, she served as the athletic director, physical education teacher and a coach for 33 years at Our Lady of Mercy Academy (OLMA), Syosset, L.I., as well as a league administrator for Brooklyn-Queens. She recently received OLMA’s Lifetime Achievement Award.