Julian Champagnie, a product of Bishop Loughlin H.S., Fort Greene, and a junior on the St. John’s University, Jamaica, men’s basketball team, was ranked as the No. 22 best returning NCAA men’s basketball players for the upcoming season, as ranked by NCAA college basketball analyst.

Champagnie led the Big East Conference with 19.8 points per game in 2020-2021. After initially declaring for the NBA draft this past summer, he decided to return to the Red Storm after maintaining his college eligibility. 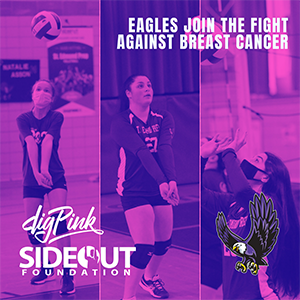 In honor of October as National Breast Cancer Awareness Month, the St. Edmund Prep H.S., Sheepshead Bay, girls’ varsity volleyball team will once again host a monthlong Dig Pink campaign to raise funds for breast cancer research through the Side Out Foundation.

Senior Shannon McNeice, the volleyball team’s captain, is this year’s Dig Pink ambassador. The school has set a $4,000 goal for the campaign.

Josh, the older brother and an outfielder, made his MLB debut with the Toronto Blue Jays on April 9. He finished with seven hits in 35 at-bats this season after being sidelined for several weeks with a hand injury.

Richie, the younger brother and an infielder, had a productive minor-league season for the Cleveland Indians. In 66 games with the Double-A Akron RubberDucks, he batted .299 with six home runs and 36 RBI. He was promoted to the Triple-A Columbus Clippers, where in 36 games he hit .292 with 11 extra-base hits.